My Political Week From Hell 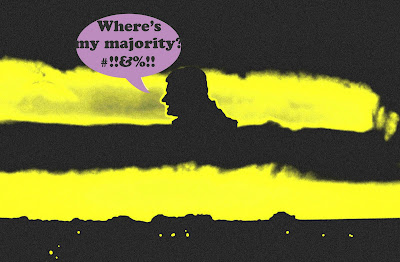 Gawd. What a horrible week in politics it has been. And now it's raining. And that monstrous cloud formation is hovering over my head again.

And to make matters worse my Liberal and NDP friends are fighting each other. And since I believe in the Anyone But Harper Party.... I'm getting it from BOTH sides. Is that fair eh?

Especially since it's all so absurd. Stephen Harper pretending he doesn't want an election, when he's probably drooling so much John Baird has to follow him around with a mop. The NDP on the defensive...feeling guilty for saving us from a Con majority. And the Liberals on the offensive. 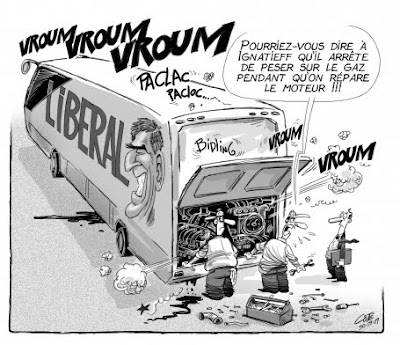 "Could you tell Ignatieff to stop stepping on the gas pedal while we fix the motor?"

However at least I have some good news for the Liberals : Don't worry about Denis Coderre.

Because just about nobody in Quebec does.The general view is that he is a pompous, abrasive asshole who thinks he's Napoleon...a loud irritating presence who you should try to avoid at all cost. And above all NEVER share an elevator with ...in case it gets stuck between floors.

And BTW it's not just Quebecers who feel that way.

So do the Taliban... 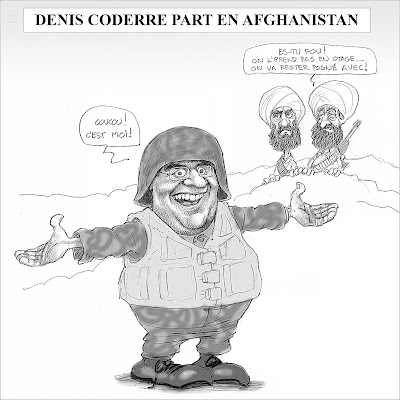 "Are you CRAZY? If you take him hostage you'll be stuck with him."

Because NOBODY would pay the ransom. And sadly he has nowhere to go but the Liberal Party. So trust me he'll come back soon...with his tail tucked between his legs.

Oh wait. He already has.

Excellent. So now we can concentrate on more important things. Like convincing the rabble in Ontario that Stephen Harper and his Cons are just a cruller joke.

Because if that doesn't reach out and touch his dumb supporters what will?

So now I just have to figure out how to convince my Liberal and NDP friends to stop fighting each other.

Will I have to use my awesome powers of hypnosis....or a fire extinguisher? Or will I finally be able to persuade them that you don't have to be a genius like me to figure it out?

Two is better than one...

But keeping the fire extinguisher handy....
Posted by Simon at 1:46 AM

I'm an ABC too. Maybe we should form an ABC party. We just won't call it a coalition.

There's a good opportunity coming up for NDP and Liberal bloggers to work together. The by-election for Dawn Black's vacated seat in BC will be a tough battle between the NDP and Conservatives who finished just a couple percentage points short of a victory in `08. With help from liberal bloggers we could keep it out of Harper's grubby hands.

See here is what you are up against Simon. This guy believes totally that the Liberals would win an election if the New Democrats would only let the nation go to the polls.

This blind faith is spouted even though every poll speaks against it and Justin Trudeau, himself, let it slip to the media that Ignatieff doesn't actually want an election.

So ... I wouldn't look forward to seeing Lib bloggers lay off their ill concieved strategy of a full frontal assault against Layton and the New Democrats. That will, no doubt, initiate retaliation.

I hate to tell you, but your 'political week from Hell' may just be starting.

Hi Annie S...you do realize that if we did form an ABC Party we'd win by a landslide. So let's call it a coalition so we can humiliate the Cons even more... :)

Hi Robert...in an ideal world, when faced with a threat of this magnitude, I wish the Liberals and the NDP would come up with some agreement to block the Cons and get as many progressive seats as possible.
But although I try to be optimistic and hope for the best, I'm afraid it's going to take a Con majority to bring us to our senses.
And it's going to be a very very hard lesson...for us and for Canada...

hi leftdog...yes I know what you mean. Try as I might I can't understand this denial of reality. I LIVE for the day Stephen Harper's Cons are defeated. But to go charging off half cocked, and risk giving Harper a majority, is simply insane.
There is no other word for it. Both the Liberals and the NDP can use the time to prepare, as well as using it to soften up the Cons a bit.
And then, when the time is right, bring down the government and defeat it.
But sadly I can't even influence my friends so all I can do is hold my head in my hands, and just hope that the madness will end.
My only consolation? When I'm sitting in my rocking chair, in the ruins of Canada, I'll be able to say "I told them that would happen but they didn't listen to me. And at least that'll be something... :)