Jody Wilson-Raybould and the Pathetic End Of The Fake Scandal 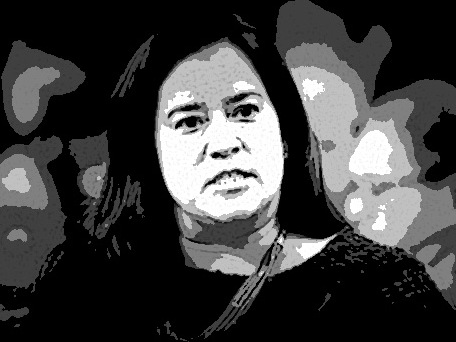 As I'm sure you know, Jody Wilson-Raybould has been refusing to vacate a suite of offices on Parliament Hill that were assigned to her when she was a cabinet minister.

Even though now she's just a humble independent MP, and the new minister and his staff need them.

She didn't say no, she just didn't budge. She even had the place blessed.

The new Common's Speaker said he was prepared to evict her, if necessary.

For a moment it looked like it could end badly. 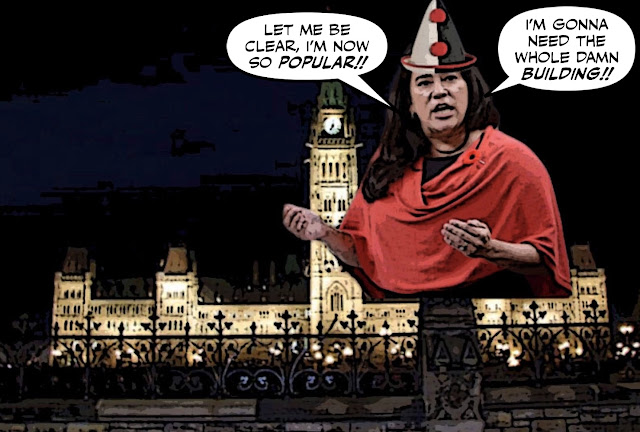 But then suddenly, just like that, it was over.

Jody Wilson-Raybould moved out of her Parliament Hill office after initially refusing to vacate the suite of offices she was assigned as a cabinet minister, CBC News confirmed on Wednesday.

And although she must have felt humiliated and outraged that somebody would dare give her the bum's rush like Justin Trudeau finally did.

This must have helped sooth her masssive bruised ego.

The SNC-Lavalin affair cost Justin Trudeau two cabinet ministers, his most trusted aide, the top federal public servant and possibly a second majority mandate; and now the woman at the centre of it all — Jody Wilson-Raybould — is the 2019 Newsmaker of the Year.

Even if it says more about our crappy Con media than it says about her.

For while nobody can deny that Wilson-Raybould generated a lot of news stories, the story itself was small one. 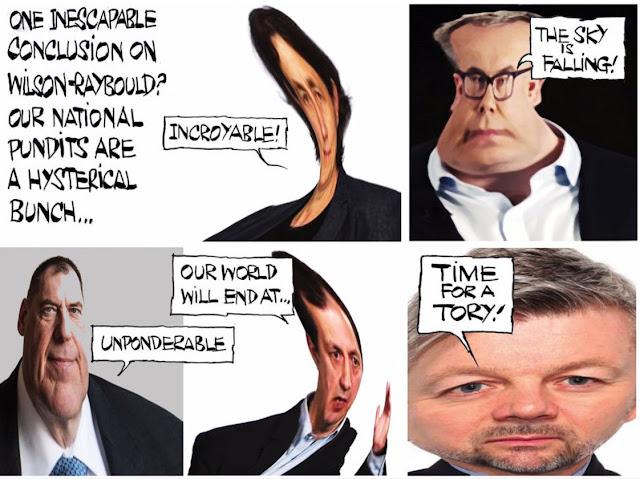 And the only reason it became so huge is because the Con media blew that small story out of proportion, turned her into some kind of secular saint battling the evil Justin Trudeau, just to please their corporate masters.

Some news editors surveyed saw Wilson-Raybould as an inspiring example — "a beacon of hope" who spoke "truth to power" and left Trudeau's feminist credentials in tatters.

"She chose principle over politics and will not be soon forgotten for staying true to her convictions, regardless of the consequences," said Danny Kingsbury, national format director for Rogers Media.

And to try to boost the sagging fortunes of the pathetic loser Andrew Scheer... 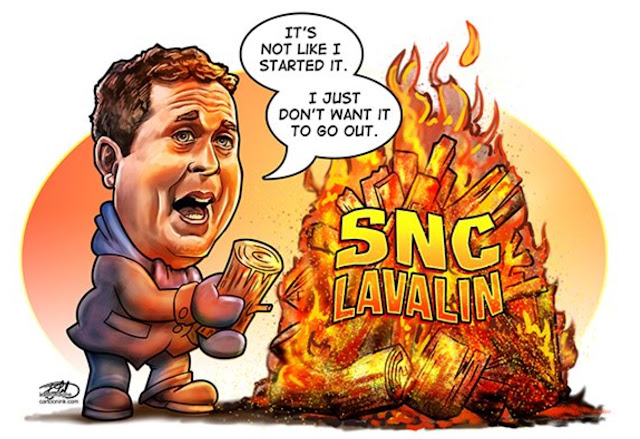 But as we all know, it was Scheer and his Cons who went up in flames along with the fake scandal.

So although St Jody is now trying to claim the credit for this legal outcome.

SNC-Lavalin Group Inc. on Wednesday settled criminal charges related to business dealings in Libya, with its construction division pleading guilty to a single count of fraud and bringing the engineering giant a step closer to ending a long-standing scandal that tarnished its reputation and ensnared the highest office of the Canadian government.

The plea deal includes a $280-million fine to be paid over five years and a three-year probation order, and appears to free SNC-Lavalin from the damaging prospect of a ban on federal contract bidding.

The fact is her championing of charges that had to be dropped for lack of evidence greatly damaged the company and its workers... 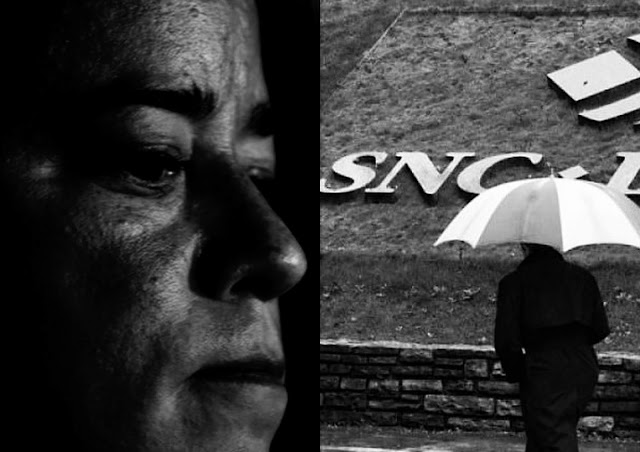 And the final result is similar to what SNC Lavalin would have received with the DPA agreement Wilson Raybould so theatrically resisted.

The result is not significantly different from what SNC-Lavalin sought to achieve when it lobbied Mr. Trudeau’s government for a deferred prosecution agreement (DPA) that would have put this case to bed more than a year ago. SNC-Lavalin Construction Inc. will pay a fine and face three years probation.

Which couldn't be more pathetic, and has some like Aaron Wherry wondering what all the fuss was all about.

And has me wondering how Wilson-Raybould was able to get away with it for so long,  the incompetence, and the hypocrisy.

Ms. Wilson-Raybould’s decision to refuse Mr. Trudeau’s entreaties may have been principled, but she should have seen them coming. As justice minister, she had overseen the very changes to the Criminal Code that paved the way for DPAs in Canada in the first place.The changes (contained in a 2018 omnibus budget bill) were made at SNC-Lavalin’s urging.

She wanted a big office, with a private washroom, and a tape recorder so she could tape people without their permission.

She tried to use a fake scandal to topple Justin Trudeau, and replace him with HERSELF.

So somebody please give her the office she so richly deserves... 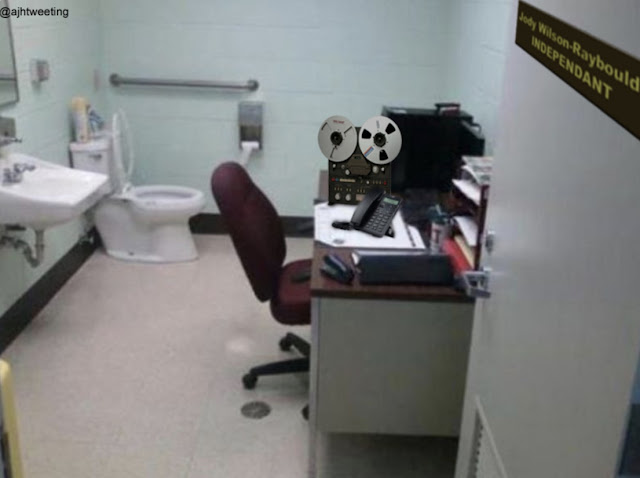 memeditorialist
Posted by Simon at 4:44 PM

I can't tell you how infuriated I am. His reputation has been so unfairly damaged by the Troublemaker of the Year. The relentless media blitz poisoning the well of public opinion is what cost him his majority. Not his "actions." Her tantrum. The wicked witch of the west with a capital B will get karma someday, and when she does she will deserve it. I just hope Justin can rebuild his image over the next couple of years and come back to win again over what is looking like a formidable and radicalized Con field that smells blood in the water. God, but I hate her so much. I absolutely hate her. Go to hell, Jody. Don't go away mad. Just go away.

If memory serves, one of the prosecutors advised her to go the DPA route as the best solution many moons ago. She knew , but hubris in the guise of her Prime Ministerial delusions wasted months and cost her any prestige she thought she deserved.

Also interesting is how little attention this latest twist attracted. Nobody but Wornout ( who is desperate for some relevance, any relevance ) seems to care.

Wornout's anti-Trudeau spidey senses are acting up again, and I notice he's been tweeting out Con media op-eds and ARI/Dart Internet push polls about Drona. Quito Maggi urges a more sober approach in interpreting the regional numbers, but hopefully this means she's the latest muse whose campaign he's going to derail. A real ladykiller.

What a fraud JWR is, a self promoter who thinks she's the smartest person on Parliamnt Hill. She is NOT. She was a terrible minister, and her whole pathetic act was just an attempt to get back at Trudeau for giving her the heave ho. She needs to understand that she failed, Trudeau won, and she lost, and hopefully give us all a break and STFU.

Yes nobody seems to care about the real issue of SNC's convoluted behavior of acting like Jekyll and Hyde. On one hand they are a large capable global Canadian based engineering firm while on the other they sometimes act like a second rate scammer oiling political wheels with mega kickbacks. Either way the public pays in higher taxes to fund bribery costs or shortcuts resulting in misery. The past is done but surely the public should be a little concerned that thanks to Harper SNC is deep into Canadian nuclear power generation and waste disposal. Nope its all about the political points associated with scandal/non scandal and not about the detailed remediation measures including politically independent oversight that should be taken to ensure SNC has turned the page on their past. Instead its all about 'Trudeau bad' , 'Jody&Cons good' now lets turn the page until a radioactive Jekyll emerges sometime in the future.

Anyone who says a plea deal is not significantly different from a DPA doesn't know what they're talking about. Regardless of how the company tries to spin this, the plea deal saw SNC Lavalin found guilty of fraud in criminal court. The corporation is now a criminal company.

Lavalin didn't spend millions lobbying the Libs to rewrite Canadian criminal law for this result. It wanted a sweetheart deal that would allow it to deny criminal wrongdoing to its shareholders and customers. It wanted to hide its criminality from public view and blame its fraud on a couple of rogue employees. Lavalin almost got away with it too, thanks to its Liberal friends in high places. DPAs are a terrible idea and serve only to protect corporate criminals. Now we're stuck with them and you can be sure other criminals are waiting to take advantage.

"Some news editors surveyed saw Wilson-Raybould as an inspiring example — "a beacon of hope" who spoke "truth to power" and left Trudeau's feminist credentials in tatters."

Where's my air sick bag? Sounds more like "some news editors" trying to give credence to a worn out non-scandal. A sad tale of an incompetent, power tripping JWR who couldn't get with the program. She had the legal option of the DPA yet decided to risk thousands of jobs for what?
Well, I hope her "new" office is below a tap dancing studio and her public washroom is next to a burrito stand. A deserving reminder to our Newsbaker of the Year that what goes around comes around and it's her reputation and "some editors" that lay in tatters, not JT's.
JD

SNC's share price bounced up by 25% confirming that one fraud conviction against a division does not exactly a criminal make! I believe a DPA which included the whole company would have stood a better chance of routing out corruption if the political parties rallied together and ensured the people responsible for administration were really and truly interested in protecting the public. Instead all we got was political smoke and mirrors.

According to Chantal Hebert on the CBC At Issue Panel the court settlement lets SNC off easier than a DPA. Same money but less transparency and accountability going forward.

Did Chantal Herbert consider the possibility of a shareholder lawsuit in which the company is left without a defence as it has admitted that corporate funds were used for illegal purposes?

What I have seen is a monitor, paid by SNCL, for 10 years with yearly reports to the court.

Hi Jackie....Yes, Wilson-Raybould with the help of the Con media did do Trudeau a lot of damage. Her sense of entitlement knows no bounds. She really does believe she should be prime minister. Hopefully a long stretch as an independent MP will teach her some humility....

Hi rumleyfips....I think Canadians have had more than enough of Wilson-Raybould so if she thinks she can reprise her role as St Jody of the Truth Seekers I think she is going to be disappointed. She mishandled the whole affair, showed her callous nature, and richly deserves to be forgotten as soon as possible....

Hi anon....yes, she does have an enormous ego. If it was any bigger she would hover over Parliament Hill like a helium balloon. But expecting her to STFU might be asking too much. In her mind only she can defend the interests of our native people so expect more absurd posturing....

Hi anon@ 10:42 PM....if you don't like DPAs blame St Jody. And the fact is they can be a useful legal tool by providing more transparency than a regular prosecution. In this case the final result was the same as if a DPA had been involved. SNC Lavalin would have suffered damage to its reputation either way, but at least its innocent employees haven't had to pay for the crimes of others

Hi JD....Yes that first paragraph really is sickening, especially the outrageous claim that this absurd scandal damaged Trudeau's feminist credentials. Trudeau is the most feminist prime minister in Canadian history, and that fake scandal had nothing to do with his treatment of women. Our shabby shuffling Con media set out to destroy Trudeau, their behaviour was appalling, and they will live in infamy forever....

Simon your pathetic! and your nature of deflections of the facts have raised your profile to rayson detra maybe get a Job from the Trumpster group would like a person of your Qualifications.Good luck sure your well paid.