The Cons had their Christmas Party in Ottawa last night, and as you can imagine it was a grim affair.

With no doubt many of those who attended wondering who would be the next to knife their loser leader in the back.

For as I mentioned the other day there are so many of them they practically have to take a number. 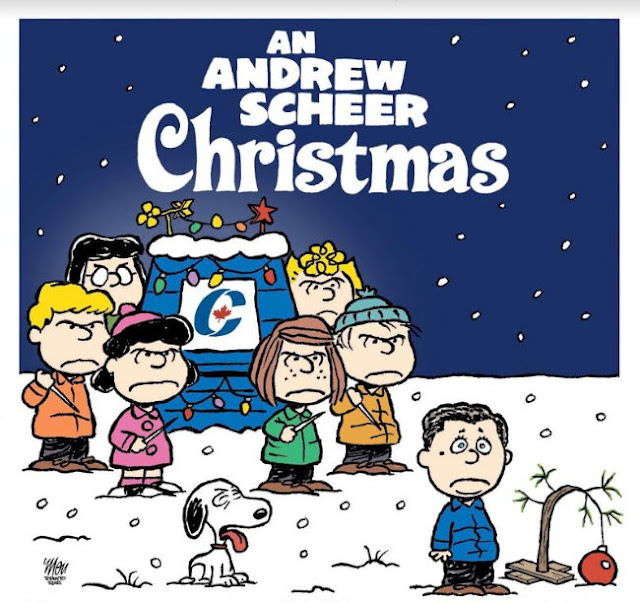 With the latest to go after Scheer being the uber Con Lorne "Grunter" Gunter, who writes that if Scheer couldn't excite the Cons at Jason Kenney's rube hootenanny, he must have a problem.

The United Conservative Party members in attendance for Andrew Scheer’s speech to their provincial convention in Calgary last Friday were polite, but far from enthusiastic. They didn’t wave the Scheer signs they had been given around much. And when he didn’t stay to schmooze after his remarks, they weren’t all that upset.

If Andrew Scheer can’t even whip up some excitement among Alberta conservatives, who can he enthuse?

Gunter even claims that Albertans didn't really vote for the Ugly American.

Yes, Albertans voted 69.2% for Conservative candidates – more even then the 68.8% in 1984, the first federal election after Justin’s papa Pierre crashed the province’s economy with his National Energy Program. However, that total wasn’t out of love for Scheer, but out hatred for the latest Alberta-bashing Trudeau.

Andrew Scheer, Maxime Bernier, Lisa Raitt, Remote-Controlled Traffic Cone; it wouldn’t have mattered who the Conservative leader was. Albertans were going to vote overwhelmingly to get rid of the anti-oil, anti-Alberta, eco-obsessed Justin Trudeau, no matter what. Andrew Scheer just happened to be the beneficiary.

Before calling on him to resign.

Scheer deserves some credit because in 2017, when the Tory leadership was being contested, few of the really big-name Tories were prepared to enter the race because they were sure Trudeau would win a second term, no matter what.

But now Scheer must get out of the way, so Trudeau doesn’t win a third.

Those are strong words coming from someone like Grunter who has always acted more like a Con cheerleader than a journalist.

But they will probably have very little effect on Scheer, because now he's blaming the media. 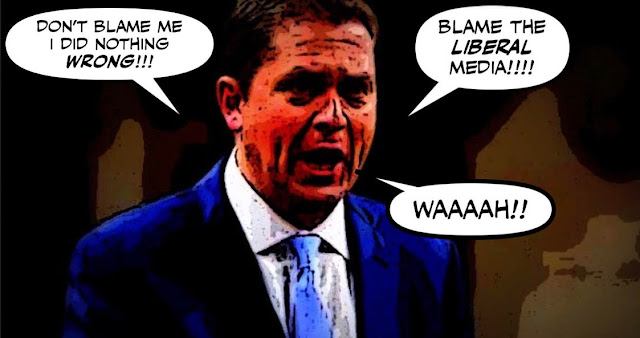 Several Conservative campaign managers in the Toronto area said the party’s stand on LGBTQ issues, women’s reproductive rights and climate change hurt them in the election, while Andrew Scheer blamed the media in private recordings obtained by The Globe and Mail.

In his own meeting with volunteers, Mr. Scheer is heard on the recording saying he had a “frank and honest discussion,” while suggesting he didn’t get a fair shake from the media.

“We don’t have all the advantages that the other parties have. I’m not sure if you noticed this, but we don’t always get the same coverage in the media,” Mr. Scheer said to snickers.


Can you believe that? A Con complaining about the Con media?

The ones who spend all their time trying to smear Justin Trudeau with one fake scandal after the other, while letting the monstrous Scheer get away with one big lie after the other?

How desperate can he be?

And no wonder he thinks that he can still get away with it...

He blamed the media, Jerry Dias, unions, etc etc for the election loss.

You know what he didn't do? Take any personal responsibility whatsoever.

Watch out for those knives.

No Christmas for you... 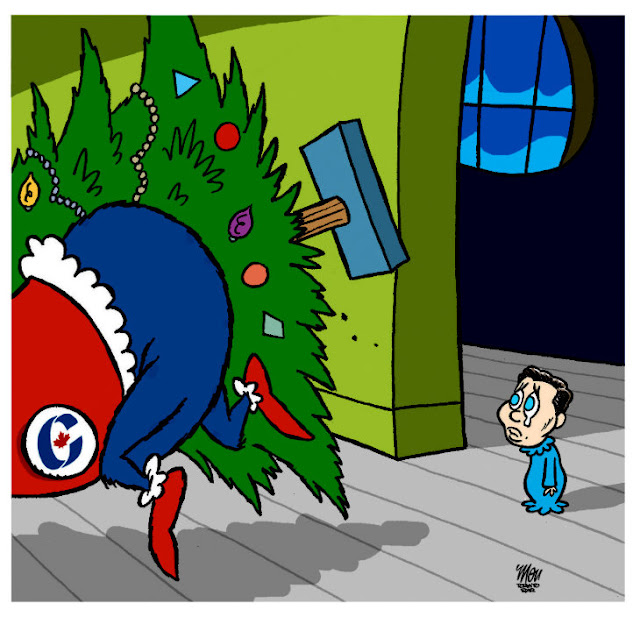 Can you believe that? A Con complaining about the Con media? The ones who spend all their time trying to smear Justin Trudeau with one fake scandal after the other, while letting the monstrous Scheer get away with one big lie after the other?

Simon, I would love to see a post about the latest fake scandal the con media is trying to smear Trudeau with. The rest of the world, especially us here in the States, love him so much for the accidental Trump diss at NATO that we want him to be president! CBC sourced the video from a Russian outlet (though they deny it), and now they're trying to issue preliminary blame of Trudeau for IF Trump hits Canada with tariffs, spikes NAFTA, or even withdraws the U.S. from NATO. Can you believe that? Blaming Trudeau for Trump smashing up the free world!

I've been telling my American online friends about how awful the Canadian media is, and they can't believe it because they thought Canada was "polite." Vichy Kapelos even wasted the NATO SecGen's time asking him about the "fallout" of the "Trudeau gossip scandal" and he was like, um, what scandal? Trump is the only scandal! I mean really, now they're boosting Putin talking points? Communist Bolshevik Channel is PATHETIC!

Now Scheer and Singh are both ganging up on Trudeau and agreeing with Trump that he's "two-faced." Tag-teaming with Andy is a pattern with Jagmeet, and I'm sorry Simon, but I don't think he's going to change. Now he's really jumped Baby Shark by tag-teaming with Trump! I mean how is that a good look for the NDP? What, do they sympathize with him because he's orange, or just because they share a hatred of Trudeau? Trudeau is a fucking hero the world over, and Singh and Scheer just sound like the same jealous mean girls they accuse him of being. Bah humbug to Jag and Andy and the garbage Pravda M$M!

Hang on Andy we need you, we do not know how to quit you.

The Russians are our friends. They have interests, but if we were not peeing in their pool every day, we would be better neighbors.

What did Trudeau do now? It doesnt matter to the cons. And the media keeps serving the crap up. All I heard was Trudeau recalling Trumps teams reaction to Macrons retort. "chins dropped" Trudeau should quip "fake news" Would that be an international incident? Canada is not in the same geographic risk as some of the other NATO members. And we are doing more than our share settling refugees from NATO interventions. Canada needs nukes! Thats are contibution. Trump happy?

Susan Delacourt has the only sane take. Everyone else is crucifying him for everything from NAFTA getting spiked to Trump withdrawing from NATO to the prisoners in China getting executed -- none of which has actually happened.

The Canadian media's Trudeau derangement syndrome has led to them amplifying Putin talking points. And by the way, as for the pathetic waste of oxygen that is Jagmeet Singh: the word is provokatskiya. Literally, provocation. He is a useful idiot in their December Revolution.

Where's Ottlib? He had a take a short while ago about the dearth of worthwhile up-and-comers in the Cons being weak Andy's last hope. He might want to see about getting royalties from TorStar for thinking of it first:

Although I suppose the garbage media's Pyrrhic gambit is to save Scheer by dragging down Justin again, this time by blaming him for starting WW3. And their jaws just dropped...

I agree. Jagmeet's tenure is quickly devolving into an unmitigated, horrendous disaster.

I thought we learned in 1939 that appeasement only made bullies stronger. Turns out when it's your turn in the hot seat, it's different. Bunch of cowards.

You're right, Jackie. If this is what Jagmeet-head Singh thinks is worth making an issue out of and then aligning himself with Scheer, well, he's just proven that he's an opportunistic idiot. All Trudeau did was unintentionally(or not) show the world what a joke Trump truly is to other world leaders. All of which was already common knowledge to any sane person. It's not like JT called Trump a pompous, lying, POS who stole from his own charity. We already knew that too.
JD

native children suicide, unsafe drinking water, homelessness, the opioid crisis. surely world opinion will forgive us. but who cares! this 2% is only promoted by the beneficiaries to the MIC

Campbell Clark , in the Groat and Flail , has a reasonable take.

Although I wish Trudeau had done it , it was actually Macron who said the emperor has no clothes. Trudeau was just congratulating him for his stance during the photo-op/news conference.

Some Brits have a different take. They think BoJo's handlers engineered the "late"question to show voters he is not to close to Trump.

Below us, some deplorables deplore . most are ignoring the laughs and some are delighted. A wornout alarmist predicts the end of NAFTA . He is again showing a lack political and communications skills. Trump desperately needs a win; this episode only makes him need one more. The only easy win for him before the election is NAFTA if Nasty Nancy will let him have it.

You gotta admire Macron. It must have been like being trapped in a stalled elevator with Don Cherry.

Hi Jackie....The Con media has indeed soiled its pants again, and shown its true colours. We need to go after those responsible for this latest assault on our democracy, and you can be sure I will....

Hi Steve....As I've said before, I like the Russian people, at least the younger generation. But Putin's corrupt government is not our friend, and is a danger to every democracy in the world...

Hi rumleyfips....yes, Trudeau was they one the Con media went after because he was the only one facing the camera. But Macron was the one who had to endure Trump's senile dribblings, and must have had some choice words for the other leaders. As for the Con chorus in this country, and the absurd statements of Kinsella and others they are simply pathetic. Especially since Trump needs a NAFTA victory even more than we do...

Hi anon@7:23PM....Trudeau did nothing wrong. It's just another fake scandal brought to us by our shabby Con media. And it won't go anywhere....

Hi JD....I agree with you, Jagmeet Singh has once again made an absolute idiot out of himself. Jiggy doesn't know what he is doing, and any credibility he still had has been totally destroyed. It's clear that he is Nathan Cullen's puppet and unless he cuts his puppet strings, he will lead the NDP to oblivion....

As I expected the media has changed their focus from Mr. Scheer's problems to Mr. Trudeau today. Mr. Trudeau essentially disappeared after the election, starving the media of any oxygen so they sought it where they could find it, with Mr. Scheer.

Now the House is back, Mr. Trudeau cannot keep a low profile anymore, so they will shift back to him again.

Mr. Scheer survived until today so his odds of surviving until April just got alot better. And I can assure Jackie Blue that my idea that the list of possible replacements to Mr. Scheer being very thin is not a new idea to our media. They have known it for some time they just decided not to mention it until today. That is why I have been saying that everything the media has been saying about Mr. Scheer and his prospects should be largely ignored. They are not and they were not telling the whole story. Quel suprise!