Andrew Scheer and the Ghost of Stephen Harper 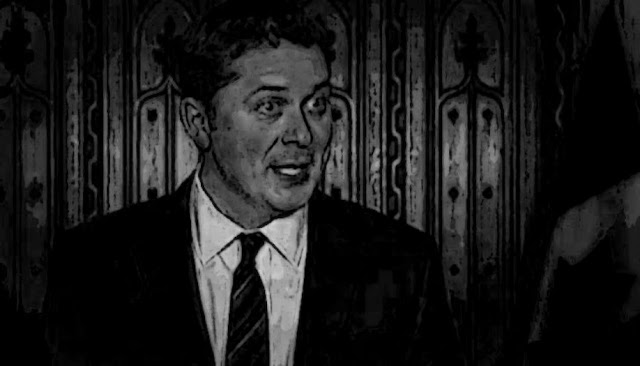 Once upon a time Andrew Scheer's Twitter feed pumped out a grotesque anti-Trudeau  attack ad about every six hours, seven days a week.

But now that torrent of Con diarrhoea has all but dried up, along with Scheer's
creepy smile which has apparently been replaced by a look of sheer terror.

As he comes to terms with the reason he was forced to resign so suddenly. 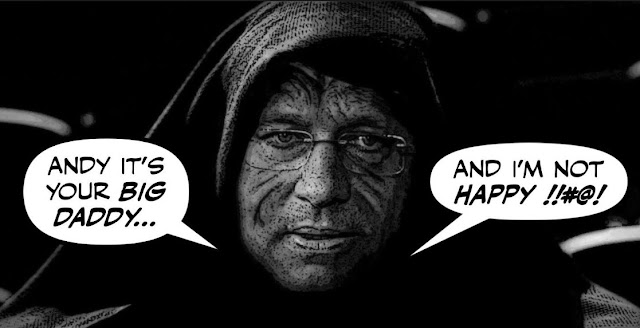 The wrath of Stephen Harper.

Stephen Harper and other directors of the Conservative Fund dismissed the party’s executive director over the payment of private school tuition fees for Andrew Scheer’s children to avoid a backlash from donors and grassroots Conservatives, according to a source close to the former prime minister.

And although Harper claims he knew nothing about that payment, the scandal just keeps on growing.

A member of the Conservative Party’s fundraising arm says he doesn’t believe the rules were followed when the party approved the use of donations to cover the private-school tuition fees of some of Leader Andrew Scheer’s children.

And the whole sordid mess has renewed speculation that Harper might want to be Con leader.

The other day Michael Harris wrote a long article suggesting that Great Failed Leader might be considering a comeback.

For months now, sources within the Conservative party have been telling me of an internal faction eager to see Andrew Scheer gone in order to make way for the return of Stephen Harper as party leader.

Nothing we’ve seen in recent weeks, and now today, argues against this. In fact, Scheer’s doomed attempt to hang on to the CPC leadership has been like watching a puppy running around on a six-lane highway. And now he’s roadkill.

So who might be next up? As the Christmas ditty goes, it’s beginning to look a lot like Harper, everywhere you go.

But Harris' article rings hollow. It's a lot of separate stories with nothing to hold them together. And one gets the feeling that since he once wrote a book on Harper, Harris is just looking to sell a few more copies.

Which also seems to apply to Paul Wells, who was also recently spotted beating a drum for a strongman like Harper.

For Wells wrote not one but two books on Harper, and must be desperate to get rid of all those unsold copies gathering dust in his basement.

But sadly for Harris and Wells, the most of the reaction online was muted to say the least, or too rude to print. And the only one who seemed to get excited or aroused by the Harper comeback story was the Disaffected Liberace.... 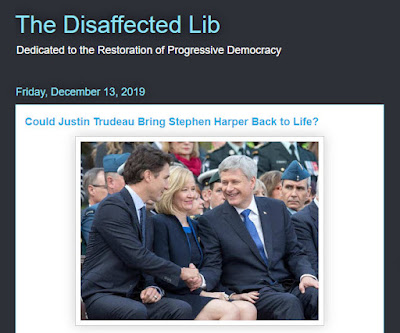 Who used it as yet another excuse to go after Justin Trudeau.

Who as you may know he blames for EVERYTHING... 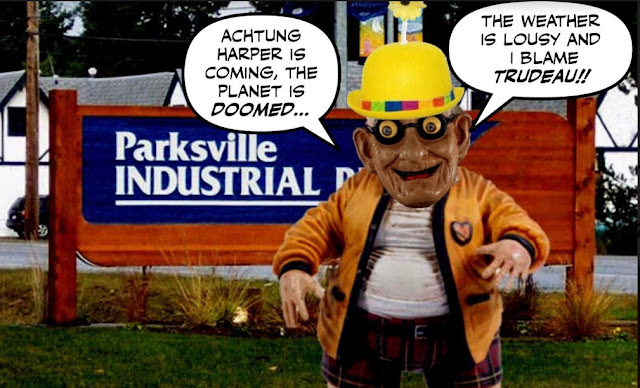 Even though, Trudeau's popularity is soaring... 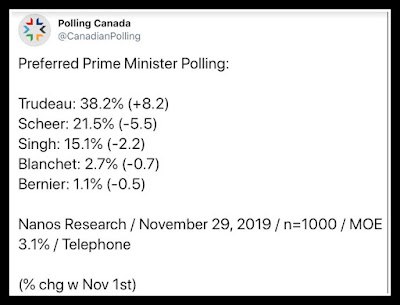 While Harper's popularity couldn't be lower...

So if Trudeau ever had to take on Harper again, his victory would be even more overwhelming than it was last time... 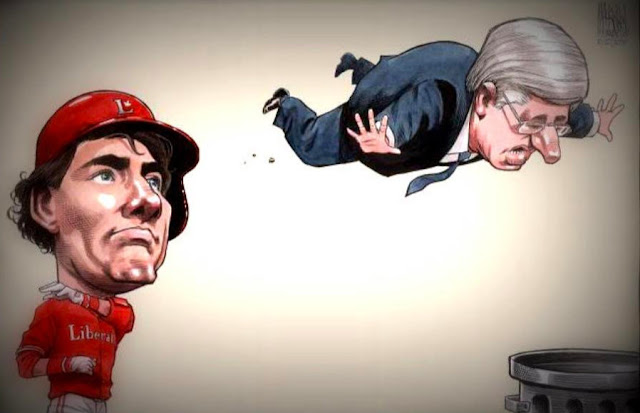 But then he's not afraid of Harper, unlike Andrew Scheer... 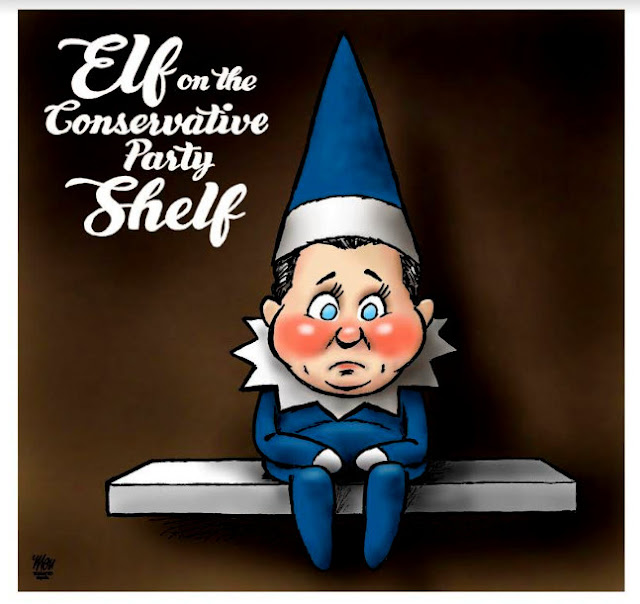 Who must surely know that now that his Big Daddy is annoyed with him, he won't be going anywhere.

But then neither will his scandalous Cons, who no decent people could ever vote for.

And the answer to this question will always be no...

An out-size personality like Stephen Harper?! What's Wells been smoking? Harper was a control freak with the personality of a feral cat. He was, and still is, loathed from coast to coast.

Until they exorcise that SOB and everyone from his rat-infested regime from the CPC "Conservative Personality Cult," every leader is Harper. Including the vaunted Rona Ambrose, Harper in drag, whose own list of problems (safe injection sites, reopening the abortion debate, feminizing Trudeau, etc.) seems to have been flushed down the memory hole. Her floated "savior" candidacy seems to be of interest purely as a crass appeal to gender politics, to shove out Trudeau by portraying him in bad faith as a fake feminist and chauvinistic bully. Hopefully she is truly done with politics and just stays out of the race, or Trudeau sends her on vacation to D.C. before she can Con enough people (with media assistance) into coronating her as Canada's own Margaret Thatcher.

Then again, if she doesn't jump in -- Dale Smith says she might not -- I predict a draft Jody movement to arise, and for her to jump on board out of Scheer spite. Yes, I know she said she would never become a Con but she has no principles besides what's good for herself. Her husband is a Con; it'd be her last chance of going after Trudeau and winning back sympathy for "modernizing the party"; and Daddy promised her the top job and a bigger office, after all. But I digress.

In related news, Harper's pet bulldog Jenni Byrne says her old boyfriend Skippy the poodle will win the leadership. Seems Uncle Steve wants another golden boy who will do as he's told. Andy has been a bad boy breaking the piggy bank and gets no chocolate milk for supper. Sad.

I read the Harris story and nowhere does he blame Trudeau for anything. Paul Wells didn't either, so where did the Disaffected Lib get that ridiculous headline? I used to read him but I don't any longer, since I can't trust anything he says. We are lucky to have you to expose his lies, so I feel like Jenny. Thank you and Happy Holidays Simon !!

But if JWR crossed the floor she would have to move out of that office.

Why are you insulting feral cats?

The very idea that Stephen Harper might be considering a comeback makes me feel like vomiting. Could Canadians have forgotten the horrors of the Harper years? My only consolation is that if he did become Conservative leader he would go down first, and his party would soon follow him.

Hi anon....I think so too, the very thought of Harper returning seems more like a nightmare than anything else. But we live in dangerous times, if people in the UK can elect a monstrous Con like Boris Johnson anything is possible....

Hi lagatta....I think anon meant feral hogs.,I love all animals but apparently those hogs are running wild like the Cons, devouring everything in their path, and something has to be done to stop them

Hi Jackie....yes, I see the Con media is urging Rona Ambrose to become Con leader even though she was one of Stephen Harper's most loyal acolytes, and tried among other things to close down the Insite clinic in Vancouver even though it has saved thousands of lives. As for the suggestion of Jody Wilson-Raybould crossing the floor I must admit that thought had crossed my mind too. But then following the sordid adventures of the Cons is enough to make anyone paranoid. 😉

P.S. I've said it before but I'll say it again. Your knowledge of Canadian politics is simply awesome. We are so lucky to have you on our side. Hopefully once we liberate this country we can help liberate yours...

Hi rumleyfips....Unless of course she ran for leader of the Greens or the Cons. She says she's not interested, but I'm beginning to think she'll do anything for a luxurious office, until of course she becomes prime minister....

Hi Jenny....Thank you so much for those kind words. And Merry Christmas and Happy New to you too!! I don't get much encouragement in our shrinking blogosphere, unlike Twitter where I now have thousands of followers. But I enjoy having such great readers, and driving the Cons crazy. They really do hate me, and ever since they were humiliated they have been foaming at the mouth. To make matters worse one of them, a troll who likes to call,others trolls seems to have a crush on me🤑 Gawd. I delete all Con comments almost as soon as they arrive, but Lordy they are losers...

Hi anon....thank you and Happy Holiday to you too!! But as for the Disaffected Liberace's absurd post, Progressive Bloggers is bad enough with Warren Kinsella as its principal contributor. But that crazy old toxic Trudeau hater only makes things worse. I think he's going senile but that's no excuse for intellectual dishonesty....

Hi anon....I know how you feel, but don't worry. The more I think about it, the more I think it's just a Con fantasy. They have been beaten and humiliated and they are just clutching at straws. They are like the old Nazis in the South American jungle hoping that their Fuhrer will return to save them. Der Fuhrer won't be returning and neither will Harper....

"But if JWR crossed the floor she would have to move out of that office."

And have to use a public washroom, with one ply paper. She needs at least two ply for her and her ego and three if she's evicted.
JD

Harper is the sure winner of the worst PM in history contest.