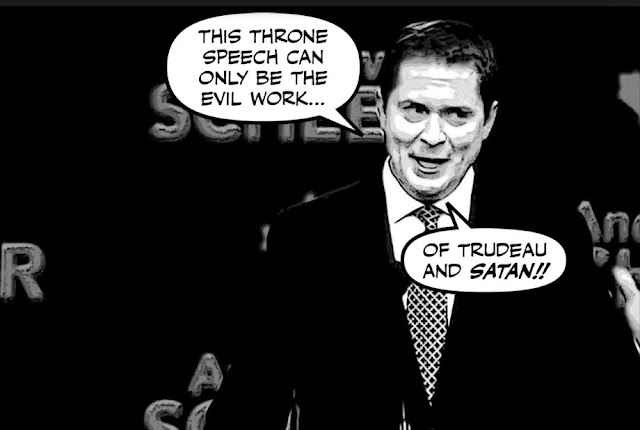 I knew that Andrew Scheer would absolutely hate the Throne Speech, because it never mentioned the holy words "ALBERTA, SASKATCHEWAN, OIL, and PIPELINES.

But did promise that the Trudeau government would step up the fight against climate change, which Scheer doesn't believe in.

And I knew that he needed to make as much noise as possible to remind Canadians that he's still the Con leader, or still had a pulse.


Conservative Leader @AndrewScheer said he’s disappointed by the speech from the throne. “Today was an opportunity to show that over the last 6 weeks Justin Trudeau has learned the lessons of the last election...but instead we’re just seeing much more of the same.” #cdnpoli pic.twitter.com/GlXgHUiI7C
— Power & Politics (@PnPCBC) December 5, 2019


Can you believe it? Andrew Scheer accusing Justin Trudeau of not having learned the lessons of the last election, and of just offering more of the same.

When Scheer is the one who hasn't learned the lessons of why he lost, and is still vomiting up the same negative garbage.

He just can't help himself, it's like he's obsessed with Justin Trudeau... 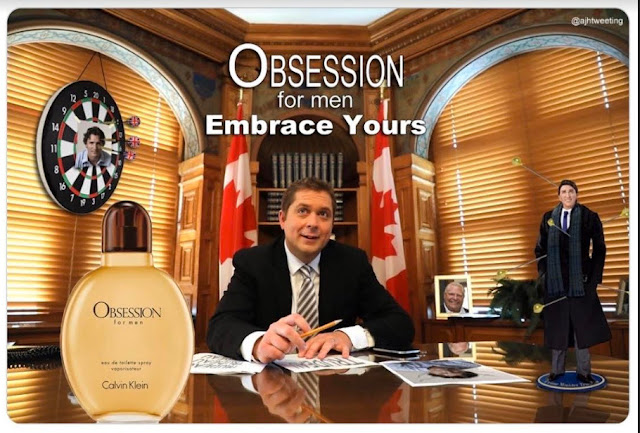 And if that image isn't disturbing enough, then there's Michelle Rempel, accusing her Liberal opponents of being "kale smoothie (drinking) hypocrites." 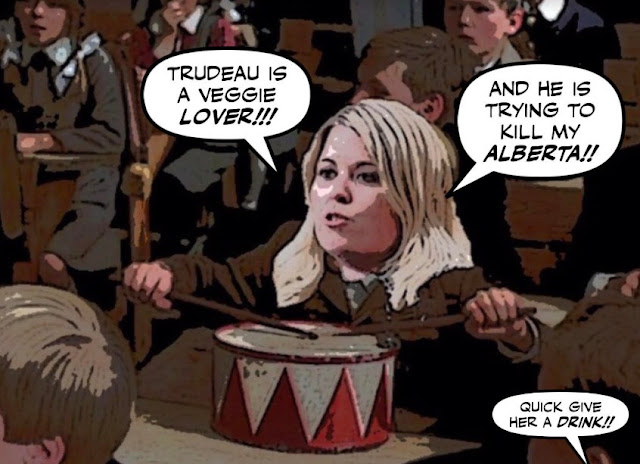 Another Conservative MP, Michelle Rempel Garner, went even further in her pointed criticism of the prime minister's energy policies. Rempel Garner accused the Liberal government of cheering on the end of the oil sector in Alberta.

She said "kale-smoothie [drinking] hypocrites" on the Liberal benches just don't understand how dire the situation is in her province.

Which makes me wonder whether she's flipped her lid, or has been dipping into her large wine collection.

But even Rempel's latest rube outburst wasn't as bad as this:

It seems like Trudeau just can’t pass up an opportunity to embarrass Canada or offend our allies.#cdnpoli pic.twitter.com/gRR10AKos6
— Conservative Party (@CPC_HQ) December 6, 2019

Leona Alleslev, who embarrasses herself every time she opens her mouth, is now calling others embarrassing?

It beggars belief. It doesn't make sense. Canadians have just made it clear that they want less partisanship and more collaboration, but the Cons are ignoring them and carrying on as usual.

Which among other things,  means mocking the Liberals for the absence of the decent Ralph Goodale who was defeated in the election.


Because that's who the Scheer Cons are; classless yahoos, more American than Canadian.

Aaron Wherry believes the reason that Scheer is the same old Scheer is because he's still fighting the last election.

Scheer's party won 121 seats and Scheer is adamant that he doesn't need to change — except to the extent that his party needs to communicate better and hire better advisers.

Aside from some artful comments about the honour of occupying a seat in the House of Commons and a new focus on national unity, most of Scheer's remarks resembled a reprise of the fall campaign. Possibly because the campaign hasn't really ended for Scheer.

So we can expect more of the same garbage to pour out of him for at least four more months.... 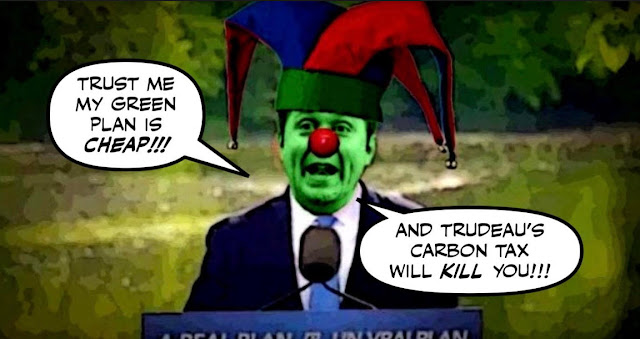 Scheer apparently has decided that his best chance of surviving that vote is to put the onus on Trudeau and acknowledge his own need for change as little as possible — particularly when it comes to climate policy.

Even though attacking the carbon tax like a rabid hyena, after 70% of Canadians voted for parties that supported it, could in the long run destroy him and his party.

Yup, as I said the other day, doing the same thing over and over again, and expecting a different result, is the very definition of insanity.

The Ugly American is losing his marbles, and with a little luck he'll take his grubby RepubliCons down with him.... 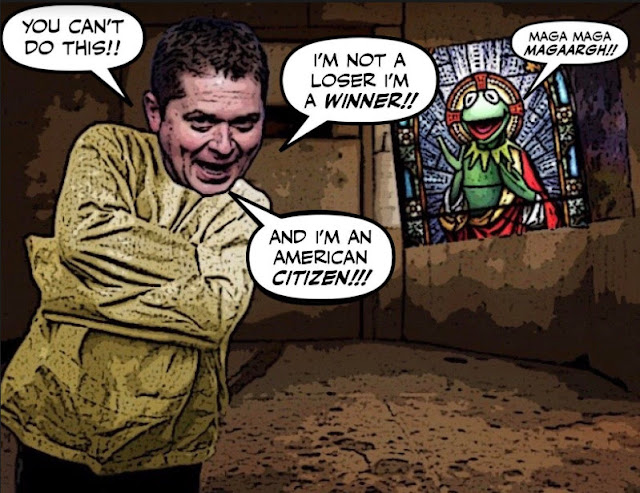 Nik Nanos said today on CTV that Andy and his sidekick Jaggy (who doubled down on siding with Trump over the "Trudeau two-faced" bullshit) could both end up "irrelevant" if all they keep doing is saying no to everything and getting angry. Andy just keeps shouting nonsense incoherently, while Tonda MacCharles pointed out that Jagmeet wasn't even paying attention to the throne speech because he was shuffling papers and chatting with colleagues. Spoiled brats wanting attention. No wonder they sympathize with Trump. Besides their rudeness, immaturity, and ignorance of governmental institutions, all they have as an argument is "Trudeau bad." Both of them and both their parties have outlived their usefulness and need to just dry up and go away. Time to grow up or shut up. Something that neither of them seem able to do.

It seems more a scream of shrill desperation from Scheer. He can rant and rave about Trudeau living rent free in his head and his party's heads but he isn't going anywhere.

Scheer is desperate and his only hope is to convince his evangelical and oily backers that he has a chance of forming the next government. This has to happen before the leadership review in the spring. Its too late to change strategies so its anti Trudeau propaganda 24-7 in the hopes that lady luck will smile and something bad will happen such as a terror attack, recession, global incident, China tantrum, NAFTA delay, etc. In Scheer's world bad news and Trudeau are totally interchangeable and his only hope for salvation.
The evangelical crowd is fickle and will go wherever the spirit takes them but the tarry oil sand gang are more logical, have the money and will play one against the other until a clear path forward emerges. The carbon tax is a do or die fight for them and they will stop at nothing short of jail time. Their problem is that extracting oil from the sands consumes vast amounts of energy that produces green house gas. At current oil prices taxing this energy consumption at the rate of $50 per metric ton of ghg will kill the project. They have successfully bamboozled the environmentalists on legacy issues but carbon tax seems more resilient as long as the Trudeau Liberals are in power. Approximate numbers are as follows; a production rate of 3 million barrels of tarry oil a day generates approximately 200 million metric tonnes of ghg a year or approximately 30% of Canada's total ghg emissions. Slap on a $50 per tonne/ $10 billion per year surcharge and poof there goes Harper's oily dream.
The irony is that generating the 200 million tonnes of ghg adds around 5% to Canada's GDP whereas the energy consumption associated with the other 400 million tons of ghg helps produce 95% of our GDP. If Canada is serious about reducing ghg emissions, abandoning the tar sands and adding a small amount of regular Alberta crude to boost energy based GDP activity in other manufacturing, transport and consumer areas to compensate is a no-brainer. Its all about sustainable value added activity and unfortunately in 2020 tarry oil and Scheer politics are bottom feeders!

Does anyone think Jason is lining up to knife weak Andy? What was going on at that IDU Christmas party in Washington where Steve smooched his fellow fascists under the mistletoe?

More hints that Kenney is preparing a run. A bullshit act that he's "reformed" himself for Christmas like Ebenezer Scrooge. Just like Doug, Steve is attempting to put shiny lipstick on a pair of prize pigs. I hope people don't fall for it; most New Year's resolutions are broken within the first week.

HI Jackie...l see that Nanos has Scheer dropping fifteen points in the preferred PM poll even though the overall Con numbers haven't shifted much. If I was Andy Pandy I'd take that as a message to get out while he still has some dignity left....

Hi anon....From what I've been hearing Scheer is on the verge of a nervous breakdown. He has lost some of his faithful inner circle, and he appears lost without them. I will be very surprised if he is still leader in April...

Hi RT....if if if you subtract Alberta and Sakatchewan from our overall emissions it turns out the rest of Canada is well on its way to meeting our emission targets. But add in the two oily provinces and we look like environmental criminals. So if Kenney and company think they can make us feel guilty for the state they're in, they can forget it...

Hi Jackie....anyone who thinks that Jason Kenney will ever govern this country is out to lunch, or on very strong drugs. After all the foul things he's been saying about the East, he will soon be persona non grata here, and will have to campaign in an armoured car..l

Why are so many Conservative women MPs fake blondes?