Andrew Scheer And The Con Road To Ruin 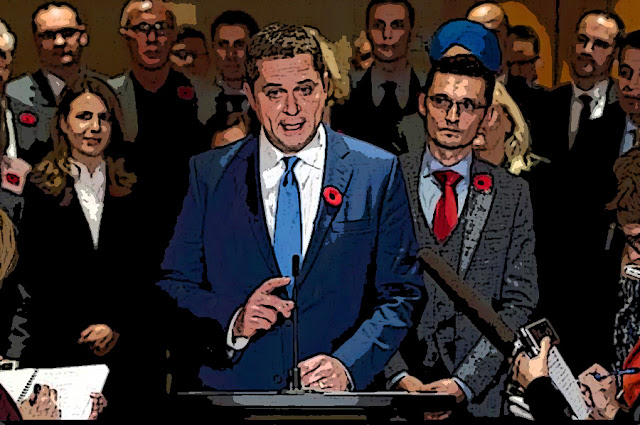 It was Andrew Scheer's first meeting with his caucus since his election night defeat, and it went on for almost seven hours.

So I'm sure many people waiting outside must have thought that Scheer was flogging himself like a good Opus Dei groupie, and promising real change.

But if they were thinking that, they couldn't be more wrong.

For when the Ugly American finally emerged he was still the same old Scheer.

Emerging on Wednesday night after a long meeting of the Conservative caucus, Andrew Scheer did not sound like a changed man. He did not sound like a man who thought there was much of anything about himself that needed to change. He looked instead like a leader digging in, in hopes of fending off attacks on his position.

The same deluded Con who is still acting like he won the election.The same oil pimp who is still opposed to the carbon tax, and would do almost nothing to fight climate change.

The same ghastly religious fanatic who no woman or gay Canadian could ever trust.


Q - "Do you believe that being gay is a sin?"
Scheer – “My personal opinion is that I respect the rights of every single Canadian” #cdnpoli https://t.co/84zLLKzjvj pic.twitter.com/js8Ghk2KnQ
— Mackenzie Gray (@Gray_Mackenzie) November 7, 2019

He needed multiple opportunities to admit he was against abortion. His career as an insurance broker turned out to be somewhat less than claimed. And it turned out he had forgotten to mention that he held American citizenship.

The grubby politician who has lied so much he now lives in his own reality, and can't even see the message his own Cons are sending him:

In an Angus Reid Institute poll released on Wednesday, just 41 per cent of Conservative supporters said Scheer should remain leader. By comparison, 85 per cent of Liberal voters supported Justin Trudeau and 87 per cent of NDP voters stood behind Jagmeet Singh.

Or see the writing on the wall.

The Conservative caucus didn’t revolt on Wednesday to boot Mr. Scheer from the party’s leadership.

So Mr. Scheer can stay for another five months, at least, until party members vote in a formal review of his leadership at the Conservative convention in April.

But the rumblings of disaffection already seem like a boulder starting to roll downhill. Pushing it back up will keep getting harder. If Mr. Scheer can’t do it soon, he is in for months of painful struggle.

Or accept the cruel fact that the more Canadians know him, the more they dislike him. 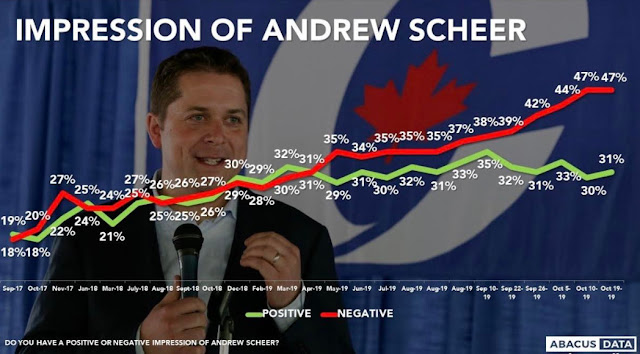 It is already acceptable for Conservatives to question whether they can ever win with Mr. Scheer.

So if the Cons think that even more of the Ugly American will make them more popular, they must be out of their minds.

Or suffering from some kind of zombie fever... 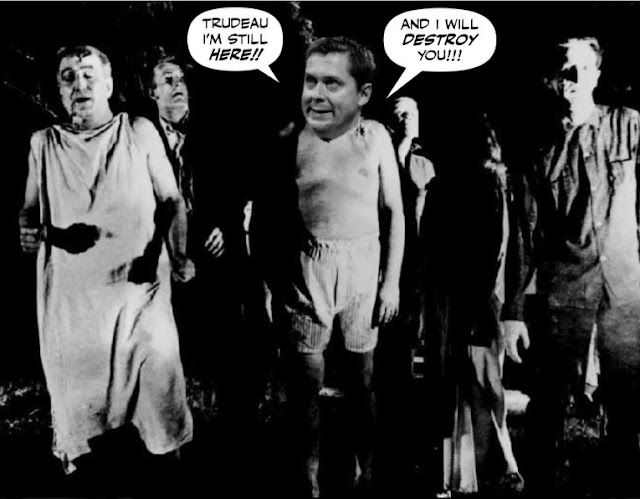 Andrew Scheer and his Cons are the walking dead, on the road to ruin.

Scheer will never be fit to be a Canadian prime minister.

And the longer he stumbles around, the better it will be for Justin Trudeau. 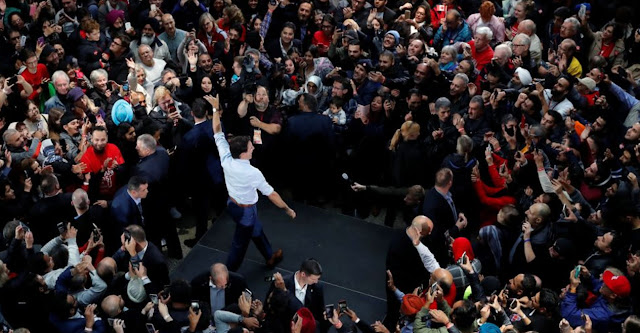 On the road to another majority...
Posted by Simon at 3:06 PM

Canadian's love our message we just didn't communicate it well enough ... I'll be here all weak ; try the veal.

First stop on alt-right Andy's "listening tour" is an event hosted by CJIA to discuss the Holocaust. Perhaps some of the subjects of "discussion" should be about the very fine people in Hamish Marshall's Rebel scum orbit. Faith Goldy and the 14 Words, 10 things Gavin McInnes hates about Jews, Ezra Levant's "personal beliefs" about Romani people, and Andy's own "personal beliefs" on Paragraph 175?

Changing horses by getting rid of this jackass won't change the fact that the whole party is Herr Harper's brownshirts through and through. Trumpian tiki torchers, the whole lot of them, rotten to the core!

I never thought I would hope the Cons would keep Scheer, but he's such a loser he can only drag the others down. If Scheer does get to stay we'll know that the social conservatives have taken over the Cons and that should be the final nail in their coffin.

The convention could get interesting. Chantal has a new column. (French) She's reading the tea leaves and hinting at another schism. Bernier's vanity trial balloon and now the astroturfed Wanksit nonsense were/are canaries in the coal mine. If -- and that's a big if -- the "Laurentian elites" hold sway this spring, the prairie base is likely to stage an open revolt. Trudeau isn't the only one to be concerned about "western alienation" (another media-created projectionist red herring). The Cons could be on the verge of tearing each other apart. I hope they do because it couldn't happen to a better group of assholes.

Losing that house will introduce him to affordability.

Our problem will remain that the biggest and most dangerous losers in the CRAP Party are guys who don't look the part as much as Andrew to his misfortune does. And they've got better tailors too. Peter MacKay's wife will ensure no doubt that he has the best.

Excluding perhaps a small bribe or P Mack blackmail, the Reformacons obtained the Conservative brand name for free and are not about to give it up. Perhaps there will be a new leader with the ability to apply a glossy new coat of paint but underneath it will still be the same old bucket of reform social crap backed by a monetary base that are only interested in protecting and expanding their wealth. The mission has not changed in the last 15 years so it is unlikely a minor election mishap will evoke any serious change in the near future. The following are a few Wikipedia excerpts dated around 2004. Scheer is a true product of the party, all that has changed is the money and their media proxies have decided they want to put a different shade of lipstick on the pig.

1) The basis of Orchard's crucial support for MacKay's leadership bid was MacKay's promise in writing to Orchard not merge the Alliance and PC parties. MacKay was roundly criticized for openly lying about an existential question for the PC party.

2)during the course of the PC party's process of ratifying the merger, four sitting Progressive Conservative MPs — André Bachand, John Herron, former Tory leadership candidate Scott Brison, and former Prime Minister Joe Clark — announced their intention not to join the new Conservative Party caucus, as did retiring PC Party president Bruck Easton. Clark and Brison argued that the party's merger with the Canadian Alliance drove it too far to the right, and away from its historical position in Canadian politics.

3)Several controversial comments were made by Conservative MPs during the campaign. Early on in the campaign, Ontario MP Scott Reid indicated his feelings as Tory language critic that the policy of official bilingualism was unrealistic and needed to be reformed. Alberta MP Rob Merrifield suggested as Tory health critic that women ought to have mandatory family counseling before they choose to have an abortion. BC MP Randy White indicated his willingness near the end of the campaign to use the notwithstanding clause of the Canadian Constitution to override the Charter of Rights on the issue of same-sex marriage, and Cheryl Gallant, another Ontario MP, compared abortion to terrorism. The party was also criticized for issuing and immediately retracting press releases accusing both Paul Martin and Jack Layton of supporting child pornography.

That's why I recommend joining the Conservative Party to #SaveAndrew and let your voice be known! Only $15 for a second kick at the can!

Hi rumleyfips....It's incredible, until you remember that Scheer also believes that the Cons lost the 2015 election for the same reason, a failure to communicate Harper's "excellent" platform.
I suppose it helps to be a religious fanatic...

Hi Jackie....Scheer seems to be flying off in every direction like an out of control firework. Apparently the Cons believed they were going to win up to the day before the election, so it must have come as a horrible shock to see the hated Justin Trudeau come out ahead. I look forward to seeing Scheer slowly unravel until he is forced to resign. That's when I'll be firing off a few fireworks of my own....💥💥💥💥💥

Hi anon....I know how you feel, and I must admit I'm torn myself. I consider Scheer to be the most dangerous leader I have ever known, a tool of the American religious right. But if he did manage to hang on with the help of those religious fanatics, he could split the Cons, and condemn them to be defeat d again and again. Decisions decisions.....

Hi Steve....Yes, after all those years of pretending to be a humble servant of the people, while living in the lap of luxury, it will be a rude shock to lose the big house and all his servants. He's such a ghastly hypocrite, I look forward to his misery....

Hi John....I agree with you, except that they'll have to come up with somebody better than Dumbo MacKay. He's got feet of clay, and the religious right that now controls the Cons will never go for him. The Progressive Conservatives lost their party a long time ago, and they're never getting it back...

Hi RT....Thanks for that trip down memory lane. I remember most of those events as if they had happened yesterday. And I agree with you, all the Cons will be able to do is apply a shiny coat of paint over their rotting carcass of a party. I once met Joe Clark and was impressed by his obvious decency, but the RepubliCons of today will never be able to attract quality Canadians like him again....

I can picture it now. Scheer continues his unabated, personal, bullshit attacks and ads against JT thinking the majority of Canadians are as dumb and as ignorant as his base. If they keep him on(which I doubt), then Harper 3.0 will help deliver JT a majority in the next election.
JD

Speaking of bullshit artists. Is Wornout back to his old tricks or is this "organic" manure in the galaxy brains of the Green Party?

The Greens are a sideshow, a personality cult perpetually in search of a ringmaster to wrangle a tiny car of clowns. Just go away already.

If this is any indication of the prevailing attitude, you might be onto something:

Wherry forgot to include one of the most recent examples and one that's even more directly relevant: Pete Buttigieg. 'Course, Andy not only wouldn't learn anything from Pete's discussion of Christianity as a call to benevolence rather than bigotry. He probably wouldn't even be able to look at Pete, let alone listen to or learn from him.