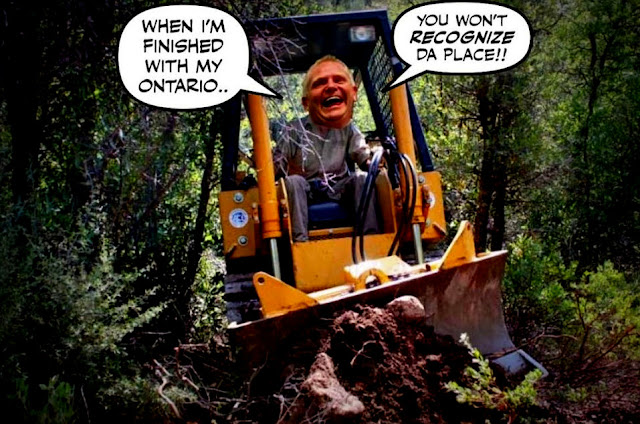 I always knew that the beast Doug Ford was going to be a destructive force, and sure enough he has been.

He has bulldozed decency, teachers and children, and will no doubt soon start demolishing medicare.

But this is beyond belief. 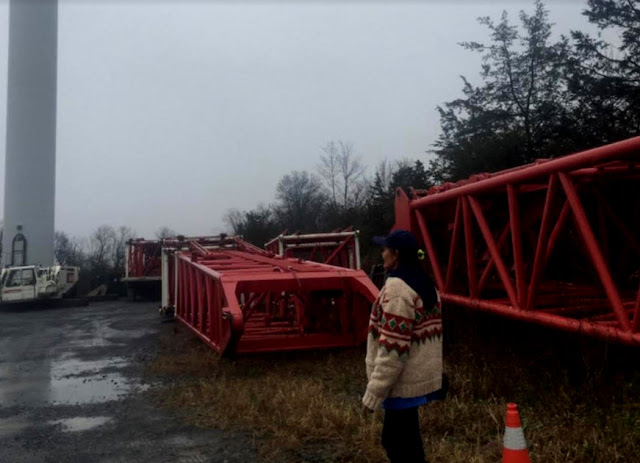 This is the work of an environmental vandal.

Taxpayers paid to put them up, now they're paying to tear them down.

Four out of the nine turbines approved for the project were built in 2018. After the election, the new government put a stop-work order on construction. Crews are currently working to dismantle those four turbines.

And this is obscene.

Ontario Premier Doug Ford says he is "proud" of his decision to tear up hundreds of renewable energy deals signed by the previous Liberal government.

Ford also says his government would remove all of the wind turbines in the province if it had the opportunity.

Meanwhile in Scotland, which also has oil, wind power is a huge success.

In the first six months of the year, wind turbines in Scotland generated nearly 10 million megawatt-hours of electricity which is almost twice the entire country’s domestic power requirements. In other words, enough energy was created by the country’s renewables to power two Scotlands!

They have wind turbines on land... 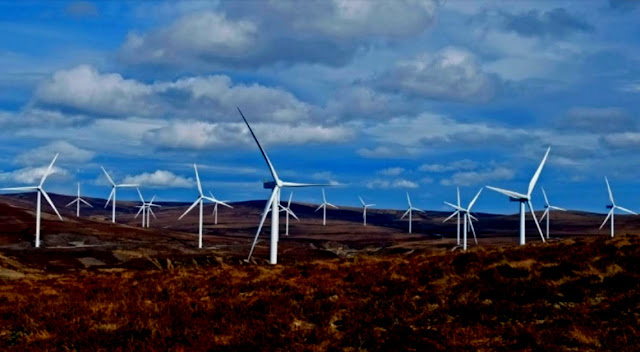 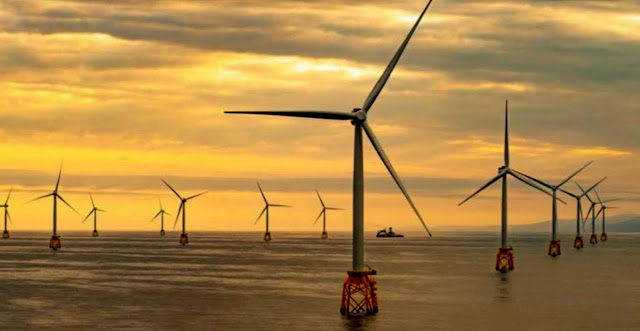 Including the ones that Donald Trump spent years and millions of pounds trying to have scrapped, only to fail miserably again and again.

So while Scotland is a small country, it has big green dreams.

The Scottish government wants to supply all of the country’s energy from renewable sources by 2020, which is a target it is likely to meet and probably exceed.

While sadly in Ontario those dreams are shrinking, thanks to the monstrous climate change vandal Doug Ford aka The Beast.... 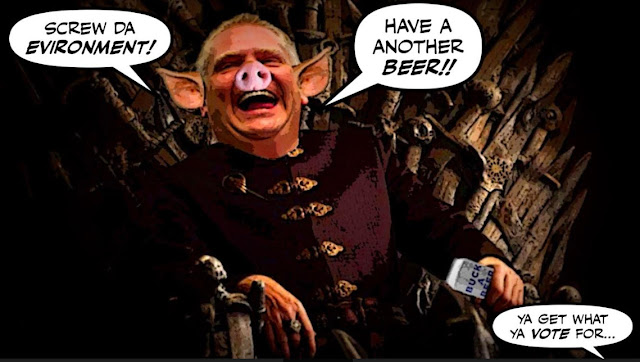 And the moral of the story couldn't be clearer.

If you want to save your province, your country, your planet.

The ugly Cons cannot, in the name of human survival, be allowed to govern ANYTHING...

Doug the simpleton is proud that he's wasted 230 million taxpayer dollars and whatever green energy that may have been produced. I guess he's also proud that his government's run as middlemen weed dealers has lost 42 million since it went online. Let's see, buy a bag of weed from a producer for 20 bucks and sell it for 40 bucks=100% profit. Hmm... maybe he did better selling hash.
"Ford also says his government would remove all of the wind turbines in the province if it had the opportunity."
Ontario, proud as a peacock and "Open For Business", if you're a demolition company.
JD

Simon, you've discussed here before the psychological and sociological underpinnings of the Con mindset. For Doug the Thug, Jason the swamp creature and Trump the Stump, opposition to ecological policies is intrinsically linked to a macho chest-thumper ideology of male insecurity. A collective Freudian complex precipitating the rape of Mother Earth. Witness how the Cons feminize Trudeau, how Bernier and his ilk attack Greta Thunberg, and how their mouthbreather followers vilified and threatened Catherine McKenna to the point where she actually pleaded to be moved from the environmental portfolio. Jonathan Wilkinson told As It Happens that it saddens him to admit he will probably be treated better as a male environment minister even though the policy focus is not likely to change. Trudeau, because of his high profile is the notable exception, but I doubt Stéphane Dion, Steven Guilbeault, or Yves-François Blanchet were ever called a C-word or threatened with rape for campaigning against pollution and in favor of renewable energy infrastructure. That's not to say they haven't faced angry opposition from the petrosexuals (particularly since all three of those men are Quebecers), but probably nothing to the level of the green-focused women themselves.

The following articles offer more support for the rationale that Dug's pride in demolishing green-energy infrastructure in Ontario is part and parcel of his embrace of toxic masculinity. Perhaps the reason why Scotland, New Zealand and the Scandinavian countries are doing better on the climate front is because they are unafraid of strong female leadership. Canada unfortunately is going backwards with such cavemen as Fred Flintstone Kenney and Barney Rubble Ford on the rampage. Talk about a Land of the Lost.

Well, so much for "Prime Minister, the government of Ontario is eager to work with you." Druggie Dougie must have been high on his own stash when he tweeted that or someone hacked his account. There's a "hash tag" joke in there somewhere, I'm sure. Oh, wait, apparently he wants to learn French now (because someone is delusional enough to make a run at weak Andy's job, ha ha ha!) So perhaps something must have gotten lost in the translation from the idiot dialect of English. "I WANT NOTHING!"

We spend 24 billion a year in Ontario on gasoline. Why not buy hydro from quebec and give everyone an electric car?

Revenge in the form of destruction of signature hold overs from the previous government is part of the Con strategy. It has nothing to do with economic sense and is a show of power, conquerors have been doing it forever. Although in this case there could be some perverse maleness attached to it, essentially its a show of political power that tells the vendors / lobbyists etc that there is a new mobster in town and if you want fine dining at the public trough you had better buy your way in. How you do that is optional but expect a shout out when you have made it as long as you remember there is no quid pro quo.
In true mobster fashion they all breach the pay for play legal barrier so it becomes a question of whether or not they have managed to corrupt the legal system before general public push back occurs. It is both surprising and encouraging that after all these years in power that Netty did not manage to permanently breach the Israeli political system. There is still hope.

Hi JD....I must admit I was stunned by this story. Ten years of construction, $231 million dollars and counting, only to be left with NOTHING? It really is criminal. And now we discover that Dougie isn't even a good pusher and apparently wants the Ontario Cannabis Store to go bankrupt. We're going to need a forensic accounting army to examine the province's books when this nightmare is finally over....

Hi Jackie....Toxic masculinity is at the root of so many problems. But I must admit I still can't believe how many comments I read every day denying the reality of climate change. So it's got to be something else are well as a desire to turn back the clock to a time when men were "men" and women existed only to feed and please them. It's a horrible thought, and we will only be able to bury that thinking once and for all is when we have many more women in top leadership roles...l

Hi Steve....I'm all in favour, as long as I get one too 😉 Seriously though, why can't Ontario find new green ways to generate its own electricity? I understand we have a green energy industry that employs more people than the tar sands, but I never hear anything about it. In this country it seems we have oil on the brain, and unless we do something about that we are going lose the race to the future...

Hi RT...lot course you're right, Ford trying to destroy the Wynne legacy is modelled on the way that Trump has tried to erase Obama's legacy. And in the case of Ford the mobster effect is only too obvious. Maybe somebody could make a Canadian Sopranos TV series starring Ford, after he is deposed, and assuming he is not in prison...

Hi Jackie...lIf Ford wants to learn French it can only be because he is thinking of running for Prime Minister. I tried that one out at a formal family dinner the other day and everyone froze in horror. And they don't even live in Canada...