Rex Murphy and the Religious Bigotry of Andrew Scheer 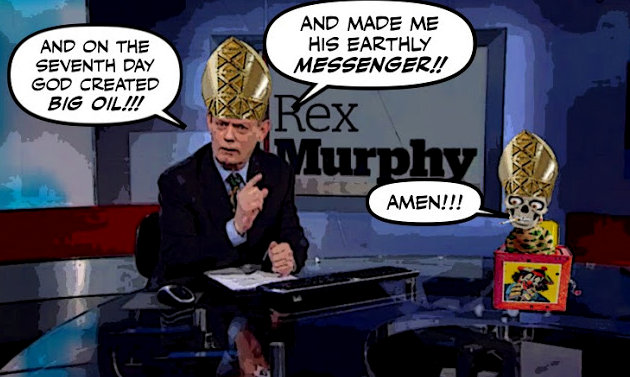 It's now been quite a few years since the hideous Rex Murphy regularly disgraced the CBC's flagship news program The National, with his reactionary views and his Big Oil propaganda.

But Murphy is still around, still pimping for the tar sands, still going after Justin Trudeau as only a rabid Con could.

And since he is no doubt bitterly disappointed by the election result, he's now venting his fury on those who would dare ask Andrew Scheer whether he's a religious bigot.


Q - "Do you believe that being gay is a sin?"
Scheer – “My personal opinion is that I respect the rights of every single Canadian” #cdnpoli https://t.co/84zLLKzjvj pic.twitter.com/js8Ghk2KnQ
— Mackenzie Gray (@Gray_Mackenzie) November 7, 2019


By dismissing concerns women and LGBT Canadians might have about Scheer's theocratic tendencies, in his usual bestial manner.

The point the sin question did have was to continue the line egregiously put out by his Liberal opponents that Scheer was going to “smuggle” his religious views on same-sex marriage and abortion into law should he win the election. It was oppo-politics chaff, and a really cheap brand of that reliably cheap stuff.

To be clear, even the dogs in the street, the very mutts of the alleyways, knew and know that Andrew Scheer was not running for PM to establish a new Catholic Dominion, that he was not some version of a Christian ayatollah plotting to bring Margaret Atwood’s grim fantasy upon Canadian politics.

And by suggesting that Justin Trudeau and Jagmeet Singh should be asked whether they consider homosexuality a sin.

Even though both those leaders have shown their support for the LGBT community... 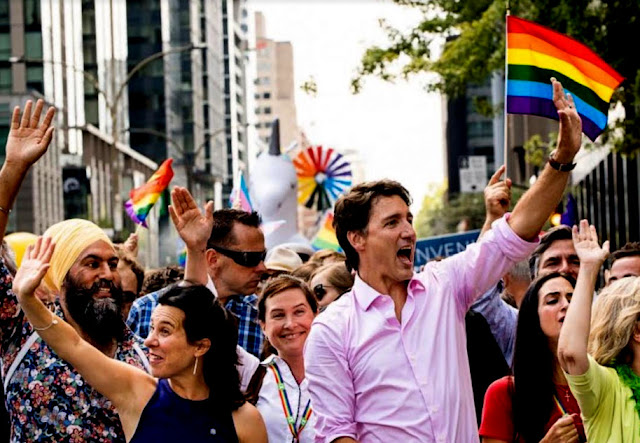 And even though Murphy has no right to criticize those trying to expose Scheer's religious bigotry.

Not when Murphy once demanded that the notwithstanding clause be used to block gay marriage.

When I read of Cardinal Aloysius Ambrozic's argument to the Prime Minister that the notwithstanding clause should be invoked to stay the enactment of same-sex marriages, I recognized his position as being within that circle of moderation and calm that is almost ritualistically held out as a model of the Canadian way After all, an urging to use the not-withstanding clause to allow for a period of study and to gauge the social impact of same sex in the other jurisdictions that have enacted it, is neither radical nor incendiary.

Cardinal Ambrozic's statement this week has the great virtue of clarifying the terrain of a real debate. For those who are seriously religious, same-sex marriage carries a profound moral threat. They see what they describe as the "fundamental concept of the family" being threatened and eroded by this new "right."

Furthermore, religious leaders are, rightly on this one, less than convinced when the government insists that churches will never be ordered by the state to perform same-sex marriages.

So he's a religious bigot himself. 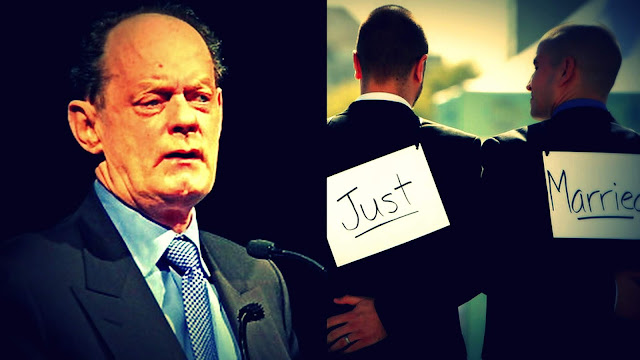 I don't know why, to my knowledge, I am the only person in this country to have exposed Rex Murphy as a hideous homophobe.

But all I will say now, is that Scheer is unfit to be prime minister, and Murphy should have been fired long ago.

The Day of the Bigot is over, and enough is enough...

Did you catch the guy pulling whataboutism on Omar Alghabra? Every time one of these Christofascists gets called out, their knee-jerk response is "but Muslims! but Sharia!" Then as Supriya Dwivedi pointed out, an unexpected consequence of Scheer refusing to "close the door" on legislating from the bully pulpit is that he ends up making Legault's case for extreme laïcité. So that's just great all around. How about everyone just agree to treat people with decency and fairness, and not restrict their personal rights as long as they aren't infringing upon anyone else. It sounds so simple and yet it's blasphemy to Altar Boy Andy and dinosaurs like T-Rex. Personally I like the civil-libertarian version of the golden rule espoused by some pagan practitioners: "If it harms none, do what you will."

Murphy's views are as distorted and hideous as his face which should have been a target of circumcision a long time ago. Loose, useless skin that harbors the repugnance and diseased mind of a little man behaving like a big prick. In the spirit of irrelevance, do us a favour Rex and pull the skin over your head, permanently.
JD

Time to pack off Don Cherry to the old white guy broadcasters' convalescent home along with T-Rex.