How Stephen Harper Came Back To Help The Liberals 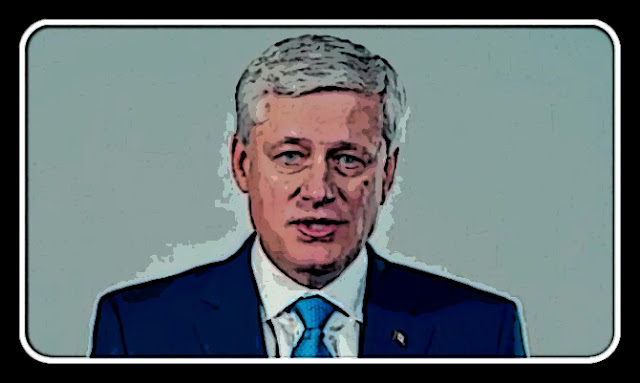 I have to admit that when I first saw the video Stephen Harper made for Andrew Scheer I was stunned.

I couldn't believe that the Cons thought that Harper could help them.

When to someone like me who spent so many years fighting him and his ugly regime it seemed more like a horror story. 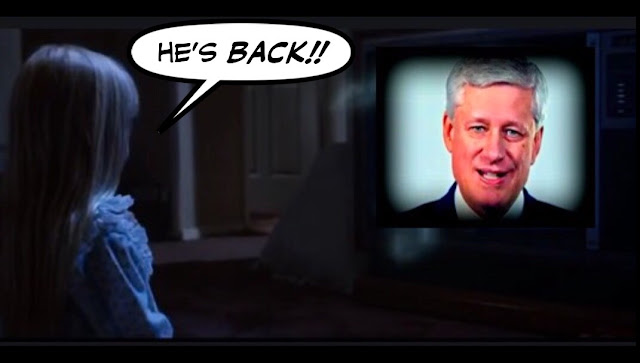 But fortunately the Liberals seem to have found a way to have the Harper video help them.

In a cheeky twist, the Liberals quickly promoted the same video to bolster their claim that Scheer would turn back the clock to the Harper era and to make their own appeal for funds.

Which makes a lot of sense, considering how hard the Liberals have worked to link Harper to Scheer.

The Liberals have been taking every opportunity to tie Scheer to his former leader, warning that he would take Canada backward to a time of austerity and minimal action on things such as climate change.

Trudeau has referred repeatedly to Scheer as "Harper with a smile" and has gone so far as to maintain that Scheer "doesn't take any important decisions without consulting Stephen Harper."

And also considering how successful they have been at getting Doug Ford to do the same thing. 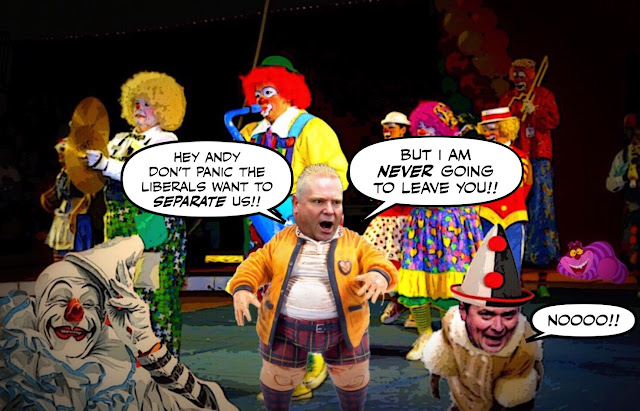 For if these numbers are accurate, Ford has managed to turn what was a close race in Ontario into a rout for the Liberals. 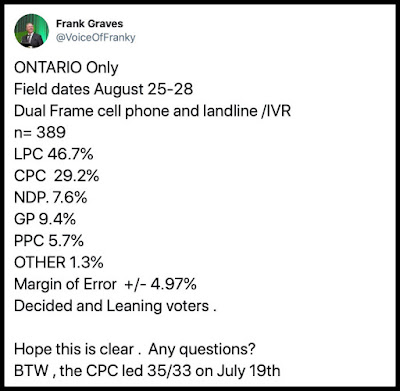 Which along with Trudeau's strong support in Quebec, and his improving numbers in Atlantic Canada, could be enough to hand him another majority.

So Harper just might be the double kiss of death... 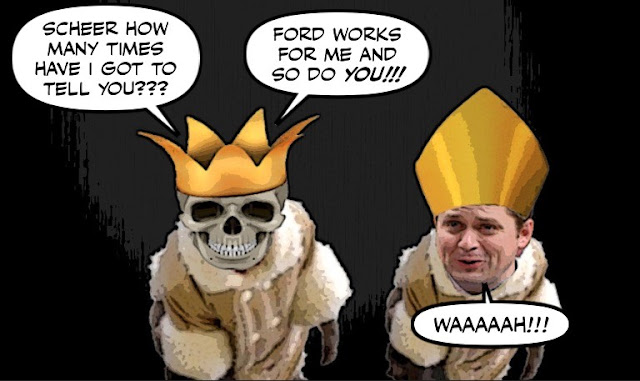 And I just hope Justin Trudeau doesn't forget to acknowledge Harper and Ford's extraordinary contribution to that glorious majority. 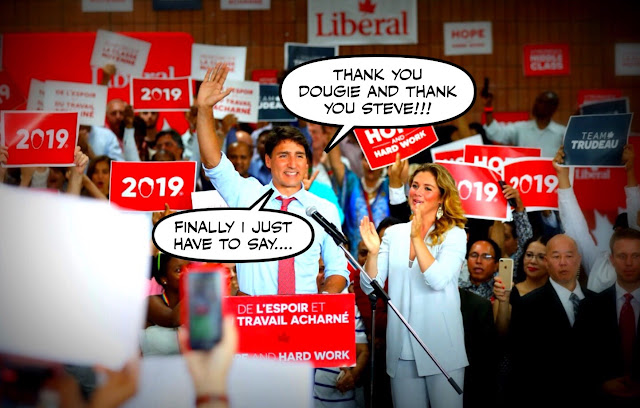 So that this little horror show at least... 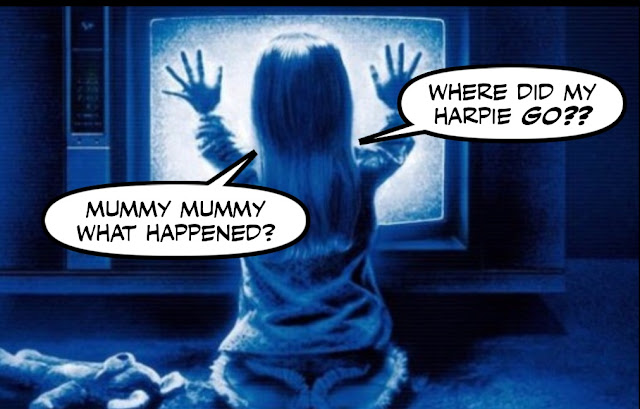 Will have a happy ending.

Now I'm off to the long weekend.

Remember when the reformatories said ' once you get to know Harper, you will really like him ?

Some good news and momentum to build on heading into the weekend. Courtesy of the latest Leger poll, and the 338 Canada projections it's been rolled into. (Frank's partial releases don't make it into 338.)

Leger poll has the LPC at 34, CPC at 33. CPC running up an inefficient bulk in Alberta and the Prairies while the LPC lead in seat-rich Ontario, Quebec, Atlantic Canada and B.C.

Abortion issue having impact on Scheer.

You have a good weekend too, Simon. I hope this horror story has a happy ending too, and that maniacal dirty trickster IDU fascist and his minions get sent packing a second time. Even if PMJT has to settle for a minority, Singh better be kept to his word on isolating the Cons. The Liberals and the NDP alike can't stand the Greens anyway, so with any luck, they won't need their support and Kinsella's latest muse will be consigned to the recycling dumpster of irrelevance she so richly deserves. But nothing is certain until October 22.

BTW if anyone wants to grill weak Andy, he's sitting for a Q&A with the Star on Sept 4.

Hm, interesting wording. Didn't his duck-hunting partner have something to say on "securing the future" for a certain type of children?

Harper was the steady hand of the 18th century. No one points out that in 12 years he could not bulldoze a pipeline. Its like Vietamn deniers, if only we had used nuclear weapons.

the Star has been in the words of Marget Thacther woobly. They have more or less fallen in line with the MAN.

I recently visited my elderly parents, who generally vote Conservative but got sick and tired of the constant money begging during the last federal election (which Harper lost).
This time around they showed me five letters (unopened) they'd received over five weeks from the Conservatives begging for money.
One read "urgent...immediate response required!" on the front of the envelope.
A second read, "Express-gram. Please rush! High-priority communication!" on the front of the envelope.
A third was from "Hon. Andrew Scheer, M.P."
The fourth was emblazoned with "Our National Campaign needs YOUR advice right away!"
And the fifth, bizarrely, had large red lettering declaring "Important petition inside: Stop foreign interference in our election!" The see-through address window included more tidbits... "URGENT WARNING: Hostile foreign entities could sabotage our election campaign! Your signature is required..." and etc. There was even a "Document Tracking Code" visible within the address window. It had the appearance of a Publisher's Clearing House mailing.
I think it's clear that the Cons are losing whatever momentum they had courtesy of JWR/Philpott.
And they're obviously desperate for money.
Oh, I have mentioned the phone calls...

Nothing like a Harper ad to remind the majority of the working class how how he screwed them. Yep you have to work a few years longer to pay for our well deserved MP pensions and don't expect any EI benefits as we used the money to pretend balance the budget and build gazebos. No wonder the Scheer "get ahead" campaign slogan has become confused with Scheer should get a head reality.

Dunno how your parents feel about LGBTQ/2S matters, but #ScheerHomophobia is now international news. Pink News is one of the most visited LGBT-related sources in the U.K. They just published this article pointing out that weak Andy doesn't give a dog's tail about gay people.

So you can let them know that Canada's conservatives are now an international embarrassment -- in a country run by BoJo the Clown at that. But of course, BoJo and Andy both think Brexit is cool.

Plus, Scheer was already featured on Al Jazeera back in March where the columnist pointed out that he is "courting the racists to win." Your folks already seem annoyed with the CPC but it might be worth letting them know that the Cons have become a vehicle for extremists. If they don't mind sitting for awhile, you can let them know Harper is doing business with fascist totalitarians in Eastern Europe and show them a little research on Viktor Orban. "Hostile foreign entities could sabotage [Canada's] election campaign!" Yeah, they already are. It's called Postmedia and the IDU. Tell them that Harper and Scheer have turned the once respectable party of Robert Stanfield and John Diefenbaker into a whole-scale terrorist organization.

Meanwhile, Trudeau is on a popular American Netflix show tomorrow, Hassan Minhaj's "Patriot Act" where the comedian (who once interviewed Trudeau about refugees for the Daily Show) says that the prime minister has a lot of international clout -- first and foremost because he's much more appealing to look at than Trump. So much for JT failing on the world stage!

Because if your folks and/or their friends are the decent people they seem to be, even they'll realize right away that this is not your father's Conservative Party.

And they need to vote Liberal (or strategically ABC in their riding) in order to stop them from getting their way.

Here's a much nicer video for your Labor Day weekend. Much more appealing than the Harper horror movie. And the Monty Python Brexit farce.

CBC clip from 1981 in which the Trudeau brothers as children respond to the wedding of Charles & Diana. Justin is 9, Sacha is 7 and Micha is 5. That's a young Maggie at the school with her sons. 38 years later, Justin is BFFs with Diana's boys. It's sad that neither Diana nor Micha survived to see it. 😢

So far, no one has unearthed a Betamax tape of 10-year-old Andrew Scheer swigging chocolate milk in celebration of the death of Ceausescu. Maybe it's locked in Harper's crypt, where he watches Netflix like other normal humanoid beings? Then again, he might have canceled his subscription after seeing a preview for the Hassan Minhaj show...

the star has a great article today on conservative economics
its called the 407, the greatest robbery in Canadian History

I am for human rights, but not uber all. Its good to be human but its not everthing. I dont think anyone living in Canada today has any real problems with being free when it comes to sexuality.

The fact that weak Andy will not defend that is a self inflicted wound from which he will not recover.

Hi rumleyfips....i don't remember that one, but maybe it's just Post Harper Traumatic Syndrome, I don't want to remember it...

Hi Jackie ....Thank you, I did have a great weekend. I went sailing and was able to watch the RAF's aerobatic team the Red Arrows soaring overhead, so you might say I was in heaven. I hope you had a good weekend too...

Hi anon@10:11 PM....Thank for that I found your comment really interesting. The Cons have always been good at motivating, mobilizing, and milking their base, but since the ex-Rebel Hamish Marshall became their campaign manager it's an exact copy of Ezra Levant's Rebel high pressure fundraising machine, Unfortunately it works since the Cons always raise more money that the other parties. But the larger problem is what it says about the relationship between the Con gang and the Rebel gang, and what might happen if they ever form a government...

Up until the Dion Liberals trotted out Jean Chretien during the 2008 election I believed they had a shot at winning. Once I saw Mr. Chretien, however, I knew it was over and it was just a matter of how badly the Liberals would be defeated.

I imagine that seeing Mr. Harper does not bode well for the Conservative's chances.

BTW, I do not believe the public polls for a minute but if what we are seeing in them does come to pass the NDP will lose official party status, the Greens will remain a fringe party, the Conservatives will lose seats and the Liberals will win a majority government.