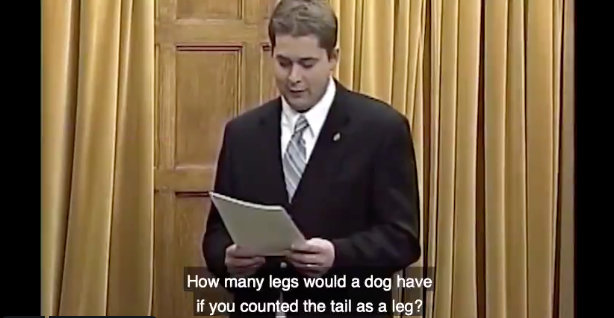 A few days ago we got to watch that grotesque video of Andrew Scheer comparing LGBT Canadians to dogs.

And revealing his inner religious fanatic.

Well now more of that deeply disturbing fanaticism has been exposed.

And it's just as shocking. 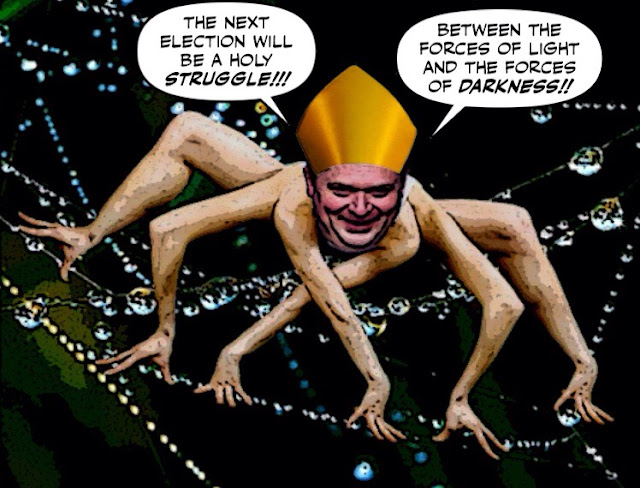 For it turns out that Scheer and his creepy Cons have been playing nasty games with the issue of abortion.

Saying one thing in English Canada, and something completely different in Quebec.

Alain Rayes, the MP for Richmond–Arthabaska tasked with recruitment, has been informing candidates and telling the media that the abortion issue is dead and that MPs will be prevented from reopening it — information that Scheer’s office suggested was news to them and a policy that caught social conservative groups working to elect Conservative “pro-life” candidates by surprise. 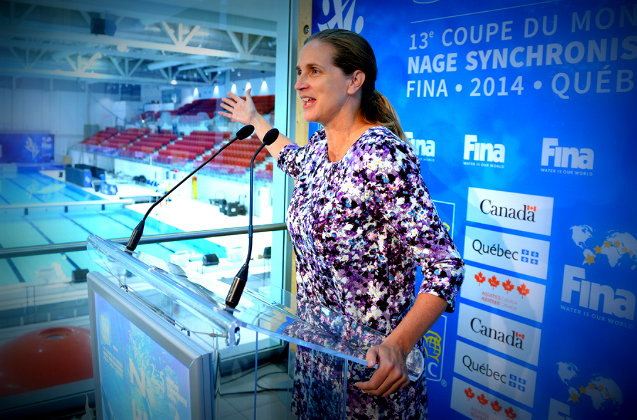 With Rayes at her side, freshly minted Tory candidate and Olympic medallist Sylvie Fréchette told the Montreal radio program, ”Tout un matin”, Monday that it was “false” that Conservative backbench MPs would be able to reopen the abortion issue. “That’s totally false,” the Rivière-du-Nord contender said.

When she should have known that a religious fanatic like Scheer would never agree to NOT reopen the abortion issue.

Scheer, who became the Conservative leader in 2017 in part by courting the support of anti-abortion activists, has never said he would prohibit or attempt to prevent his MPs from introducing anti-abortion legislation. He has said the opposite.

And that as a member in good standing of the religious right, Scheer's master plan is to try to turn the Cons into a party with hardline anti-abortion policies. 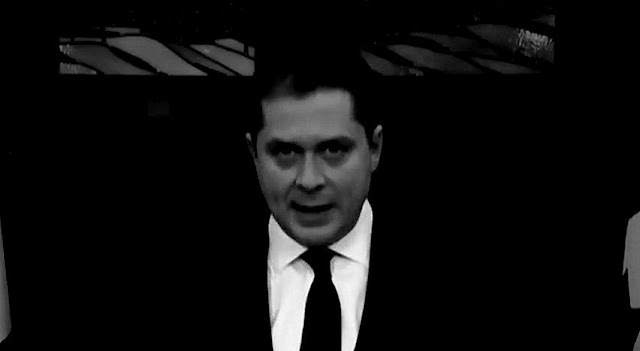 He has always liked to operate in the shadows, but eight years ago he briefly exposed himself and his plan, when he sent thousands of dollars to the candidate at the heart of the robocall scandal.

The political machine behind the man who is now Speaker of the House of Commons opened its wallet for the Guelph Conservative campaign currently under scrutiny by Election Canada's robo-calls probe, records at the watchdog agency show. 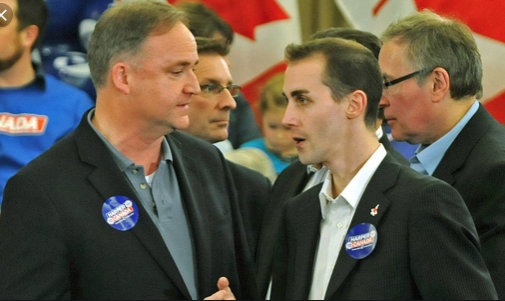 Scheer's riding association claimed that Burke, seen here with Michael Sona the only Con who did time for the robocall scandal, got the money because he had once volunteered for Scheer.

And our useless Con media gobbled that one up like only they could.

But I and others are convinced that the real reason Burke got the money is because he believes that a woman must not have an abortion under any circumstances. And that at the heart of the robocall scandal was a religious conspiracy.

Burke was never questioned about that or anything else, because he quickly moved to Kuwait, a country that doesn't have an extradition treaty with Canada.

So Scheer was never held accountable, and moved swiftly to implement his master plan as soon as he became Con leader.

First he rejected Rona Ambrose's choice of a moderate candidate to replace her, in favour of the alt-right sympathizer and anti-abortion warrior Dane Lloyd. 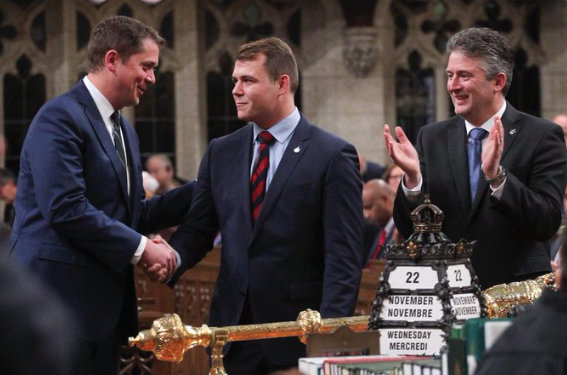 And now with an election looming, Scheer is parachuting one anti-abortion candidate after the other into ridings all over the country.

They include the singing cowboy George Canyon.

As well as those who are being recruited and promoted by the well funded group Right Now.

Who are in a hurry to restrict abortion rights, as is Scheer himself... 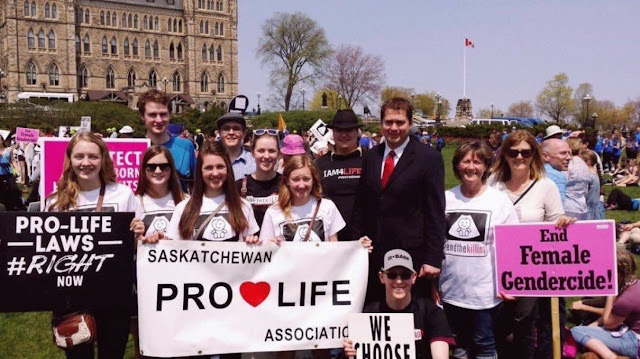 Unfortunately there are other Cons whose hardline views on abortion can no longer be exposed, because the virulently anti-choice site Campaign Life has conveniently shutdown its candidates rating guide until after the election.

They're blaming Elections Canada for that, and of course Justin Trudeau.

But has I suspect it has more to do with Scheer's plan to keep this shadowy conspiracy under wraps, until he can get a majority, turn this country into some kind of ghastly Gilead North... 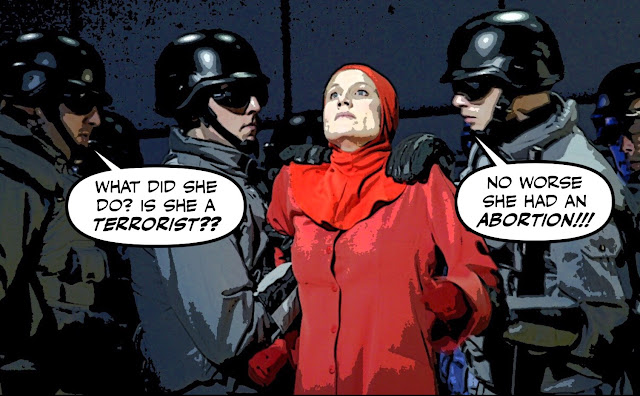 And then move swiftly to restrict the rights of women and LGBT Canadians.

I realize that for many Canadians religion is something you do in a church, and they have a hard time believing that what is happening in the U.S. could happen here.

But they're dead wrong. It could happen here, it is happening here.

The religious right is on the move, so are their fascist friends, and they are a mortal threat to the Canada we know and love.

So unless Canadians want to wake up in a country they don't recognize, they need to make absolutely sure that Scheer and his monstrous Cons never get anywhere near a majority. 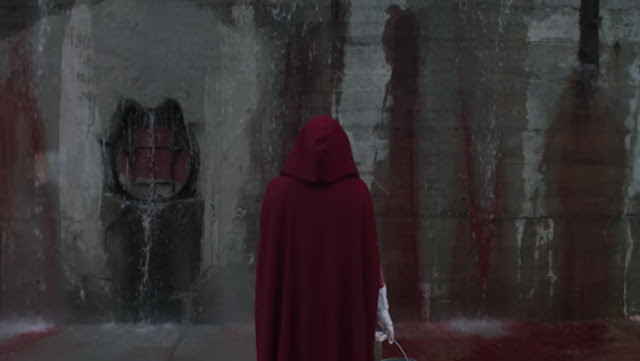 Well, now we know why the dirty old men in the media worked so hard to portray Trudeau as a "fake feminist" over their own fake scandal. Everything the right says and does is projection. Even worse is that they have the stooge May on their side, who herself is an ardent pro-lifer and is more than willing to prop up a Con minority as long as she gets some empty platitudes on climate from Oil Can Andy. These guys are sick. Even worse are the Aunt Lydias and other Stepford drones like May and the empty-eyed drone Alissa Golob acting as foot soldiers for the patriarchy. Where the fuck do these theofascists crawl out from anyway?

Also, I'm still worried about an October Surprise RCMP blip being the last hurrah for said Justin's Emails persecution gambit, since that's what Harper basically did to Goodale in 2005 and we know that's whose playbook Andy is cribbing from. I saw a headline in the Hill Times indicating some Liberals are nervous about another "Lock Him Up, Lock Him Up" art of the deal. No wonder Harper went to the States to get tips from Trump on weaponizing law enforcement to harangue his enemies...

It happens all the time, companies strive to develop a quality brand name, experience financial difficulties and sell the brand to another company willing to exploit it by selling high margin junk until the consumers catch on. Same for political parties, the Progressive Conservatives fell upon temporary hard times, sold their brand name to the Reformacons and the average voter still has not caught on. Unlike a low quality appliance the Reformacons have a strategy that once the voting public buy their junk they will put barriers in place to prevent them from throwing it in the scrap yard in 4 years time. Rather than challenge the constitution like Harper the Scheer plan is to do side deals with the provinces and let the weakened federal system and provincial infighting do the nasty work. Reformers are not federalists they are religious, western based, myopic separatists who just couldn't make it on the federal scene until they bought a brand name and perfected the art of double speak. Time is not on their side, if the miss the next election the charade will blow up if they win all bets are off as to where it will end.

Interesting, that the reformatories are so unpalatable that they have to lie to attract candidates .

Sheerly-not, waved his raving racism around with the border crossing ads.

Earlier, Sheer-idiocy was so proud ranting in the House with a confession of his evil homophobia .

Now the lies to his own candidates reveal the Sheer-nonsense of the right wing nut job party and weak andy's raging misogyny .

I hope the campaign is over soon; my dogs' ears are inflamed from all the silent whistles.

The following is an example of a Red Tory in a state of denial pleading with Scheer to pretend that the once proud PC brand is alive and well. Its not but unfortunately brand name loyalists will delude themselves into thinking its only a minor glitch and things will soon return to normal. It never does and the sooner the loyalists start making alternate plans the better it will be for everyone. Junk by any name is still junk!

I've said it before I'll say it again. The CRAP takeover of the PCs in Canada strikes me as eerily similar to the Southern Strategy and the Tea Party takeover of the GOP. The "Western Strategy." The party of Eisenhower and the party of Diefenbaker are both dead. Harper even has the same plastered Lego 'do as Lee Atwater and Newt Gingrich. Same diseased mind underneath it too. Just not ready for the 20th century. Nice hair though -- not.

The neo-Confederates of Confederation. Or is that a Covfeferacy of Dunces? I guess you could say they're not just dog-whistling "Dixie"!

Simon, can you write up a piece about Andy and Brexit? Boris Harper just prorogued Parliament! How do you translate déjà vu in English Canada...?