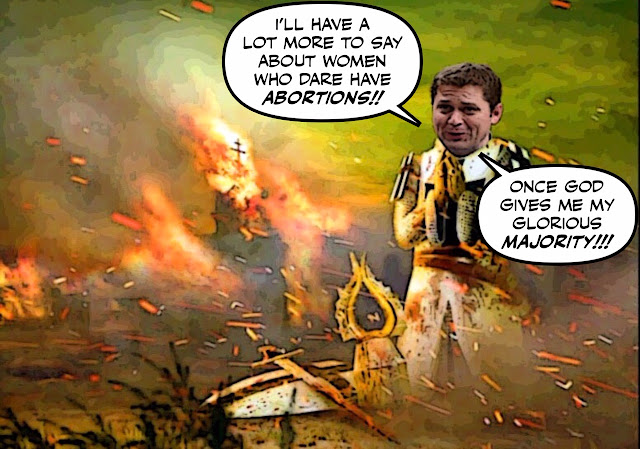 In one of my last posts I revealed that Andrew Scheer has been quietly parachuting anti-choice candidates into ridings all over Canada.

And said that the Cons should now be known as the Religious Party of Canada.

The party that says one thing in English Canada and something completely different in Quebec.

And now it seems that the Con Messiah is starting to lose his marbles. 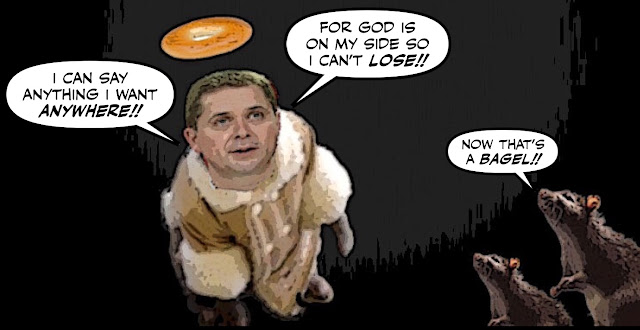 The Conservatives are again pledging to not re-open the abortion debate following a HuffPost Canada story suggesting messaging to its candidates in Quebec on whether Tory MPs would be allowed to re-open the issue was unclear.

However, a statement provided to iPolitics by the party on Tuesday did not clarify whether Conservative Leader Andrew Scheer would allow individual MPs to present private members’ bills, petitions and motions against the right to abortion if the Tories form government following the October election.

And it's not like he can claim that Justin Trudeau and his Liberals are as bad as him and his Cons.

While some members of the current Liberal caucus have previously voted in support of “pro-life” legislation, MPs under the leadership of Trudeau are now whipped into endorsing abortion rights.

Which explains why nothing he says seems to make sense anymore.


So @AndrewScheer, come clean. Out of your own mouth, will the abortion debate be reopened if you win a majority? #ScheerBullshit #cdnpoli pic.twitter.com/laXcLSP7gC
— Memeditorialist (@ajhtweeting) August 28, 2019


Or why he now mumbles so much.

Although nobody should be surprised because the Religious Party of Canada revealed its true colours several months ago, in the most disgusting manner.

You can expect to see that video played a lot during the election campaign. And Scheer is going to have a hard time trying to explain away that one. 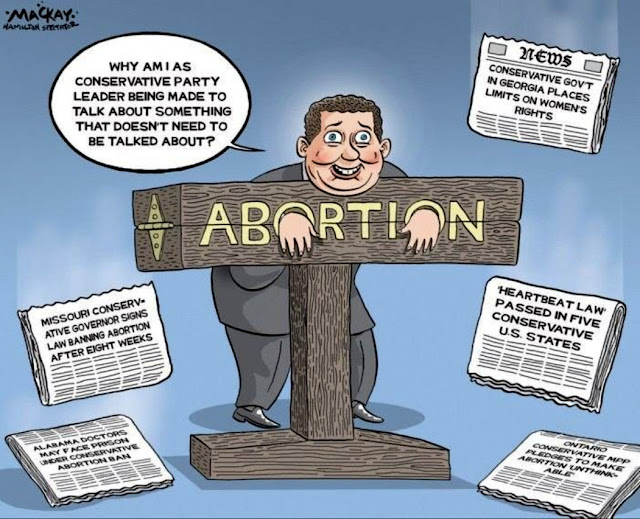 Or trying to proclaim that he's a Conservative not a Republican

Or just answering this question:


If Scheer isn't planning to reopen the abortion debate, why is he quietly parachuting anti-choice candidates into ridings all over Canada? The Scheer Cons are now a religious right conspiracy and unfit to govern Canada. https://t.co/Mr5QPp6ozd #cdnpoli https://t.co/gsCnm0HUER
— 🇨🇦 Simon 🏴󠁧󠁢󠁳󠁣󠁴󠁿 🌈🏂 (@montrealsimon) August 28, 2019


For there is a lot more dirt where that came from.

And it is going to bury him... 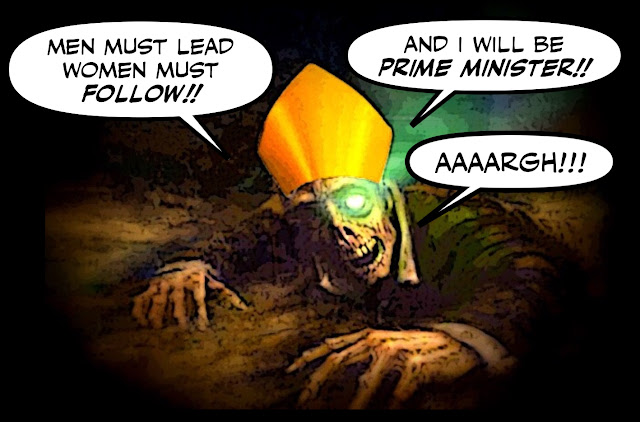 If he lies to his own candidates, what will he say to us peons ?

I hope his support of Brexshit comes back to haunt him too once BoJo the clown forces No Deal through and shit REALLY hits the fan. He already got called out by Rona Ambrose for lying about the all-party Team Canada's results dealing with Trump on the NAFTA negotiations, and now his inane tweet about Brexshit being "cool" keeps being shared and biting him in the ass. Couldn't have happened to a better bloke.

We don't know yet if Trudeau is going to the rigged Maclame's debate hosted by DicklessPW, but the Munk foreign policy debate should be interesting, if weak Andy is actually held to tough questions. Plus Harper's own comms guy is even having a WTF moment about Scheer's inability or outright refusal to muzzle the socon lunatics. Too early to count any chickens, but hopefully the wheels are starting to come off the Con clown car, Justin Time.

I recall during the 2011 election during the debates, Harper tried the same "we won't reopen abortion debate" line, and Duceppe said, yes but your MPs could introduce private members bills and the rest of caucus will support it. Harper was much more unequivocal, and said he would not allow such a bill to proceed, I believe he said he would whip the caucus to vote it down.

I disliked Duceppe's party positions, and I disliked Harper and his positions but I gained respect for both of them that day. I suspect he may have won that election by conclusively taking it off the table

Of course, a year later some backbencher tried to get a committee to study when life begins, and it was seen as an obvious attempt to criminalize abortion. Harper to his credit voted against it, and the government whip said it was an attempt to re-open abortion and they will not do so.

Evangelical anti abortion Christians are his base so its logical that with the exception of a few weasel words he is not going to say anything to piss them off. For example a statement like the party is fully supports freedom of choice. Its likely true they will not open the debate but initially will chip away at abortion rights by passing bills that defund certain support groups, provide doctors with conscientious refusal authority and fund nasty anti abortion groups armed with a whole raft of psychological weapons. Then some private members bill will open the debate and the Reformacons will weasel out downloading the responsibility to the various provinces (states) where pockets of anti abortion enthusiasts will emerge. Just another part of the Reformacon plan to divide and conquer even if it means spinning off certain provinces who march to a different drum. As per Scheer's Brexit wet dream, if you can't conquer them kick them out of your club.

If women die in back alleys it's Justin Trudeau's fault.

Scheer has been AWOL for a week, all the while the Cons are trying to deflect by accusing Trudeau of "hiding" from DicklessPW and the Munk -- er, Bannon debate. They've trotted out Raitt as their token tut-tut handmaid just like they put some random Log Cabin Con in front of P&P last week to run interference on the LGBT issue. Still no answers from Scheer himself. Most likely because the Liberals just dropped another video and it's arguably even more damning.

The video is an interview with the chair of anti-choice organization RightNow, who said that Scheer told them in his discussions with them that he would allow cabinet members to introduce anti-choice "conscience" bills, not just backbench MPs. Response? Cue the pundits and the Hamish troll mob to whatabout whatabout whatabout their usual memes: SNC, Norman, socks, the Aga Khan, Trudeau Must Go, Telford op-eds, Aaron Wherry op-eds, fake feminism, fake polls (David Akin is actually fighting with Frank Graves), Kokanee Grope, Let Max Speak, Let Jody Speak, $600M Unifor bailout, Quebec eating from the trough, taxing the air, Butts is helping Soros kill the energy sector, Prince Jackwagon, defund CBC, Toronto Red Star, Choose Forward is a communist slogan from Papa Fidel, drama teacher, wax my balls, Climate Barbie, JT slept with half the cabinet, etc. They're trotting out all the classics now, because obviously this is just more fake news from the lying press enemy of the people dopey clown Liberal media and a deep fake from the deep state, and this hasn't hit a nerve at all...

Meanwhile, Michael Coren has written an op-ed for MacLean's about how Scheer needs to be upfront and honest about his offside Catholic conservatism, and Andrew Coyne responds by... offering his sudden expertise on Eastern religions. "Inadvertently" making Legault's case for absolutist laïcité by pointing fingers at Trudeau about Muslims and proffering nonsense about what Singh would do. "But Pierre was Catholic" -- yeah, so? He believed that neither the church nor the state should have any place in the bedrooms or uteri of the nation. Debbie's disgruntled cousin never heard of Cité Libre, did he?

They just can't let their boy go. Either that or they really don't like it when those "uppity Lib women" and their "effeminate soyboy weaksauce cuck UN Soros puppet leader" have the temerity to challenge their agenda of patriarchy. Too bad so sad. Here's a lesson on Eastern religions for Coyne and the Con fetus fetishists he's defending: Sometimes karma comes back to bite you where the sunny ways don't shine.