Stephen Harper's Monument to Himself Gets Downsized 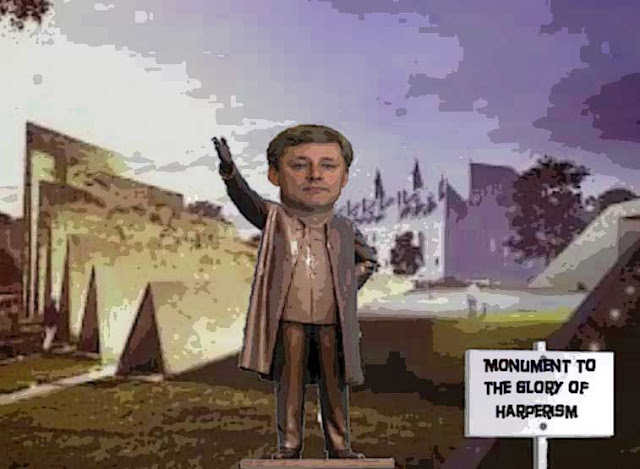 He was hoping to build this monstrous monument to himself on land reserved for a new Federal Court building, expected to be named after Pierre Trudeau.

He was hoping it would be a kick in the face of the Supreme Court, and a final insult to the leader he once called a "tired out little old man," in one of the most disgusting obits ever written.

But today the Liberal government announced the ghastly monument to the Victims of Communism will be moved.

The Liberal government is pressing ahead with a controversial monument to victims of communism – but it will be redesigned and built farther west of Parliament Hill than originally planned.

Canadian Heritage Minister Mélanie Joly announced Thursday that the monument will instead be built at the Garden of the Provinces and Territories, which is a plot of green space on the south side of Wellington Street farther west than the original location.

And like Stephen Harper himself, the tired out little old leader, the monument will be shrunk... 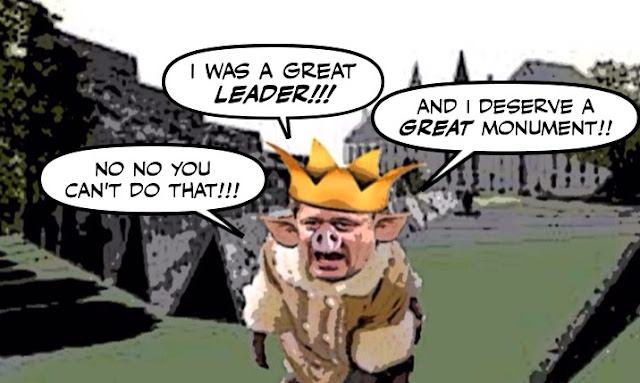 The government will now hold consultations on a new design. The federal budget for the project has been reduced to $1.5-million, which will be matched by private donations, for a total budget of $3-million.

The previous Conservative government had promised $3-million in federal funds and expected the total cost to exceed $5-million. As a result, new proposals are expected to be considerably smaller than what has been proposed to date.

And while, as I've said before, that junk monument couldn't be small enough for me... 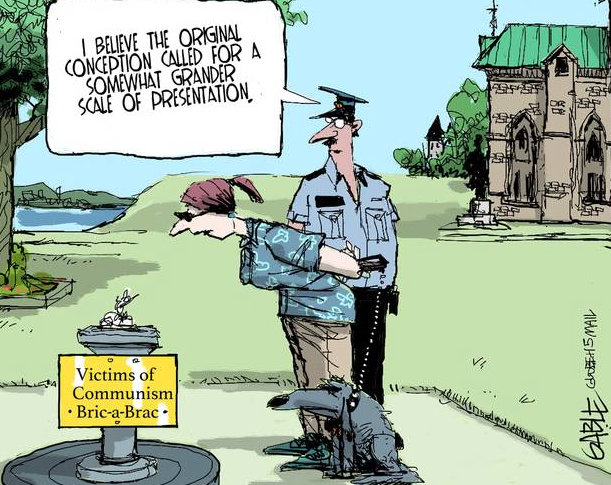 And I deeply resent that one dollar cent of my taxes is going to pay for it, as opposed to paying for a monument to the victims of fascism, or the many victims of Harperism.

Knowing that Pierre Poilievre, who pushed so hard for it, is also being downsized... 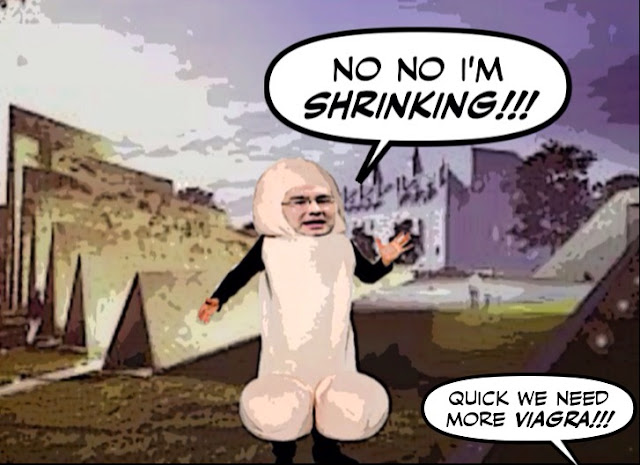 Is a BIG consolation.

As is my hope that somewhere Pierre Trudeau must be having a good laugh... 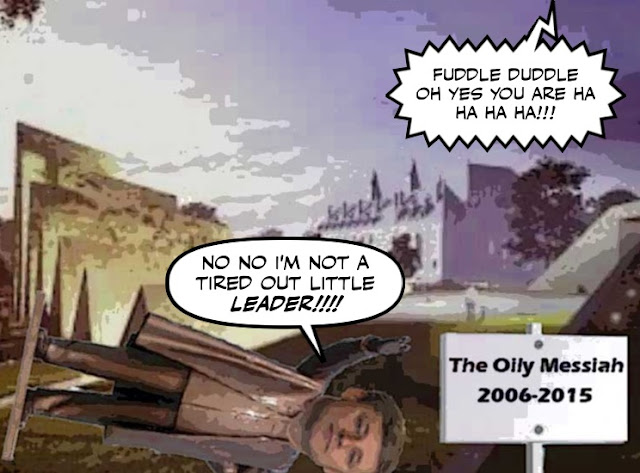 For Stephen Harper was indeed no Great Leader.

And the only monument he deserves is a prison cell with his name on it.

And the everlasting contempt of Canadians...

Labels: Monument to the Victims of Communism, Pierre Trudeau, Stephen Harper, The Death of Con Canada

Longtime lurker, first comment. Thank you for your time and effort, please to continue to afflict the comfortable, and comfort the afflicted.

$1.5 million? Are you kidding? I too resent tax dollars being used for such a useless monument. Surely, there are more pressing things they could spend that money on.

Further west. May I suggest 100 km west of Vancouver .

So once the afflicted are comfortable should we afflict them again ?

Rumleyfips: sitting on Vancouver Island, 100 ks west of Vancouver works for me. of course if we moved it just a tad further west on a floating duckie, I'd be even happier.

Spending any tax dollars on this "monument" is a waste of tax dollars. We might consider using the money to pay for a water treatment plant for some location in the north or spend the money on refugees. The communists created enough of those.

It is stupid. A monument to something specific would make sense - say, the victims of the suppression of the Hungarian Revolution, or of the Prague Spring. But in the latter case at least, many of the victims were themselves socialists or communists, but wanted a different kind of socialism that wasn't repressive. As were a great many of Stalin's victims.

I hate such oversized, "totalitarian" monuments, whatever they are commemorating. One can hardly question the logic of a "Monument to the Murdered Jews" in Berlin - though it left out the Roma and other groups, fortunately a monument to murdered Roma was built there later on - but it is a hideous dark concrete thing that is itself strangely similar to things totalitarian dictatorships would build. The stumbling stones found in many German, Austrian and other cities are far more poignant.

Is there a petition against this stupid monument to Harperism?

hi RJ...thank you and you're welcome. I will do my best to do exactly that...

hi anon...I agree, I find that grim memorial to the victims of communism completely out of place in Canada. Maybe a monument to all the refugees who came to Canada might be better, but as you point out it would have to be a very large one. I'd rather celebrate the freedom we found here, and I would enthusiastically support a large monument to the suffering of our indigenous people. And besides let's face it it, the only reason for that Harperite memorial was to try to win a certain segment of the ethnic vote, so if I had my way it would be totally scrapped....

hi anon...that was my reaction too. We're STILL going to pay for that that monstrosity? I suppose the Trudeau government is just trying to reach a Canadian compromise which lis laudable. But as for me I still prefer a bulldozer...

hi rumleyfips....no that would be too dangerous, we'd have to build a lighthouse on top of it, or it would sink one freighter after the other. And besides that where I was hoping to place the statue of Mother Canada... ;)

hi anon....well the idea is to make sure that the Cons of this world are never comfortable. Unless they are gluttons for punishment. In that case I give up... ;)

hi e.a.f....I don't think the people of Vancouver Island would appreciate your suggestion, unless they need something monstrous to scare away the seagulls. But yes I agree there are so many projects, like water treatment plants, that need our money more than that monument....

Here's a thought...how about Canada BEING the monument itself by being a batter and more humane nation? Just a wild and crazy thought...