Stephen Harper and the Invisible Man 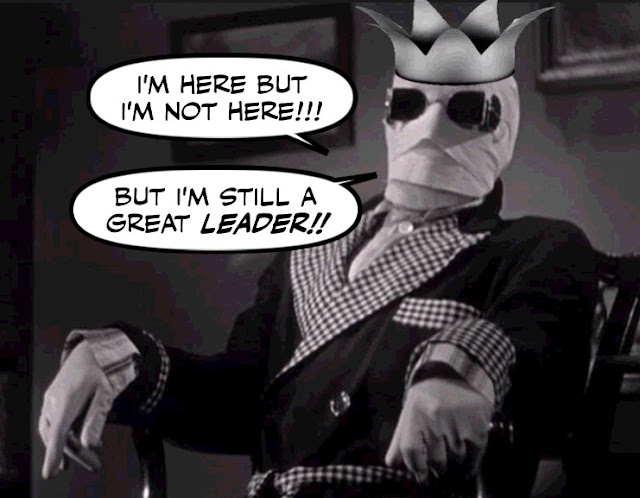 I don't know whether Stephen Harper will turn up for Question Period today, because he didn't bother or dare to attend the Throne Speech.

And people are starting to call him the invisible man.

The man who can't be seen, or dare not show his face. Because he's either too crushed, or too humiliated, or can't stand the sight of The Man Who Was Not Ready sitting in his seat.

But still clings to his lowly MP's seat, and his parliamentary immunity, in case he's suddenly dragged into the Duffy trial.

For who knows what Ol' Duff might say when he takes the stand in his own defence? 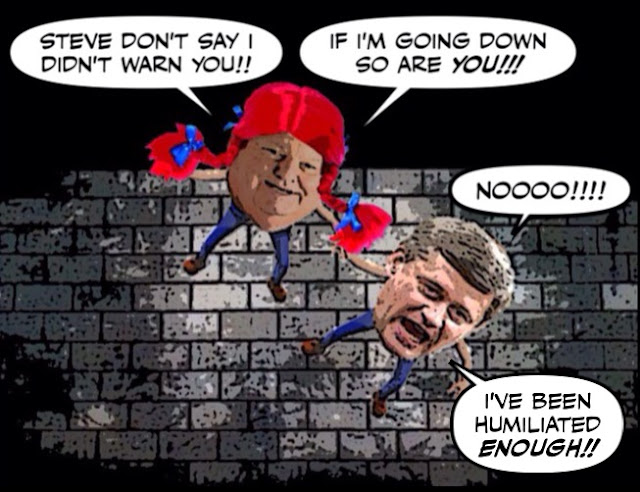 But I am hoping Harper does summon up the courage to return to the scene of so many of his crimes against Canada, the House of Commons

Or as it was called during his time in office, the House of Horrors.

After this brief but scary sighting last week... 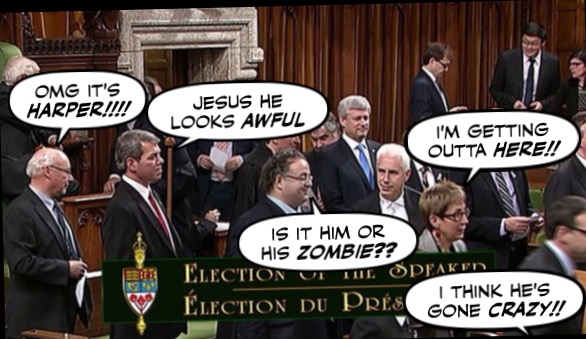 So that he can be grilled about this new and outrageous patronage scandal.

CTV News has learned that the new Liberal government plans to ask dozens of people recently appointed to government agencies and crown corporations by the previous Conservative government to step aside. A senior government source says that the prime minister's office plans to send out letters Monday morning asking the appointees to "voluntarily choose not to serve."

And his monstrous attempt to cripple Justin Trudeau's government.

Liberals say that Harper's patronage appointments make it difficult for Prime Minister Justin Trudeau to put his stamp on the country's crucial agencies.

Traditionally, governments have avoided awarding the positions before their mandate has been renewed. 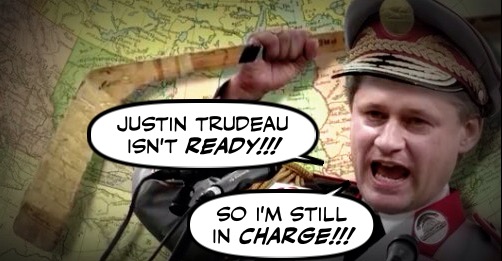 Which can only be described as an attempted coup d'etat, and if there was any justice would lead to his arrest.

But the good news is that Harper's patronage scandal will not only embarrass him, it will also embarrass Rona Ambrose.

And help ground her bombing mission against Justin Trudeau... 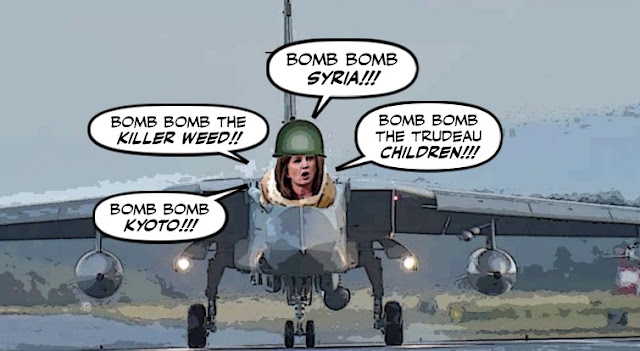 Which couldn't be more absurd, or more disgraceful, or more insane.

And the best news is that Justin Trudeau is ready, after his successful baptism of fire on the world stage.

It seemed unlucky that Justin Trudeau was thrown into his prime ministership in a whirlwind, jetting to four international summits while setting up a government, revamping Canada’s climate-change position and making plans to resettle Syrian refugees.

But by the time Mr. Trudeau stands up in the Commons on Monday to face his first Question Period as PM, it will be clear it was a rare stroke of good fortune.

And a green PM, who was attacked as an empty haircut before his election, and was an unimpressive performer in the Commons as third-party leader, has a new, worldly, political shield when he enters Question Period as PM: He’s talked about the economy with Mr. Obama and about terrorism with Mr. Hollande.

Standing on top of the world and in an ideal position to take on his opponents, and embarrass them beyond recognition... 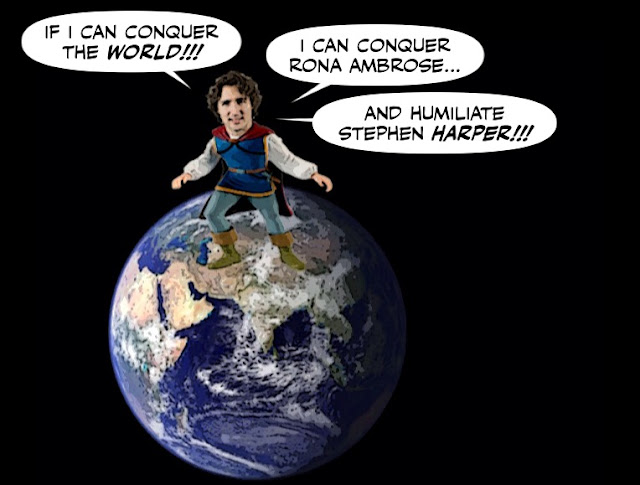 And hopefully show them no mercy, for they deserve none.

Which tells me that as soon as the Duffy trial is over Harper will be gone.

Which will be yet another occasion to celebrate.

For we really can't be safe or totally free.

Until the invisible man, sheds his bandages, and disappears completely... 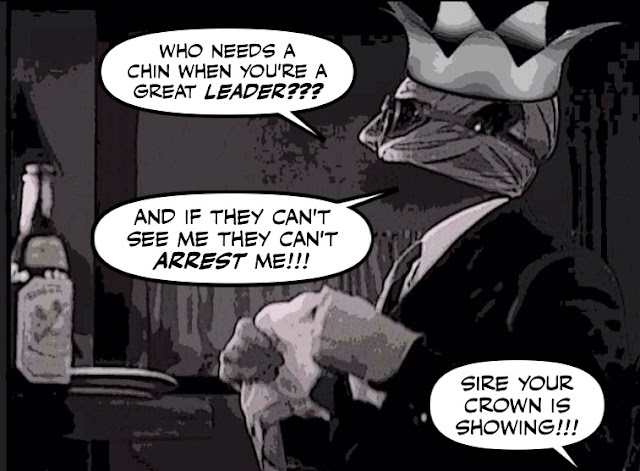 What kind of person accepts a 'death knell' patronage appointment?

Every one of Harper's appointees should be listed on a PUBLIC list, showing their pay, contact info and job requirements.
Of course, there are more subtle ways to demoralize and degrade the people appointed to these positions who fail to see the political manipulation of the situation (or acknowledge it). Use these methods immediately. If that doesn't get rid of them, FIRE THEM. Bite the bullet for the cost, remind the public that this is a cost brought to us unwisely by Stephen Harper.

If these appointees resign willingly, they will then be honourable. If they do not resign, they will prove that they are only Conservative pigs at the trough.

Will Harper be called to testify at the Duffy trial? If so, can he refuse?

Q. Couldn’t they do something else useful with this time?

A. Unfortunately, Furey is the Crown’s last witness. After he testifies, the focus will shift to the defence and any witnesses Duffy’s lawyer, Donald Bayne, wants to call, but it’s a pretty strict rule that the defence isn’t required to start bringing its case (except through cross-examinations of Crown witnesses) until the Crown prosecutors have presented absolutely everything they’ve got, so the defence knows what it’s dealing with.

The post-election appointments? Probably not anyone you would want to invite to dinner.

Harper can't come in to the House now because he lost his hair/makeup stylist. His appointed Con buddies are just salivating at their opportunities for some severance pay and some juicy contract law awards. Money for nothing! It was a going away present for his con pals in case he didn't win the election. At the time they didn't even think that Trudeau would win so it was probably directed more at the NDP.

Why doesn't he just QUIT and do Canada a big favour?

hi anon...I agree with you, we need to publicize these appointments, so people know who they are and why they are being rewarded. And those last-minute appointments need to be publicized more than most, so they can do the right thing and resign. Because if they don't the court process could cost taxpayers a bundle. Which by the way should also be publicized, so people can properly understand what Harper did, and what that grubby patronage is costing them...

hi Marie...I'm glad you liked it. As I told you all after the election, I will not be satisfied until the Con threat is removed once and for all...

hi anon...I read that one of them has resigned, and hopefully the others will follow. And the Con who runs Canada Post should be first in line to be fired. Along with the Cons running the CBC. Let's take back our national institutions before they do them further harm...

hi David...I have no idea what Bayne is going to do next. He may feel he has made his case and try to reduce the publicity surrounding the case. But if Duffy feels he is going to get nailed, who knows what he might say if he does take the stand...

hi John...yes it's very strange behaviour isn't it? Now that he has lost the protective cocoon that has surrounded him for so many years, he seems almost scared to be seen in public. But then he should be ashamed to show his face, because not only whereas patronage appointments grubby, some of them were clearly intended to try to cripple any government that might succeed him. So they cannot be allowed to stand...

I think he will quit... as soon as he is certain Bayne won't call him to testify.