How Low Will the Cons Go to Smear Justin Trudeau? 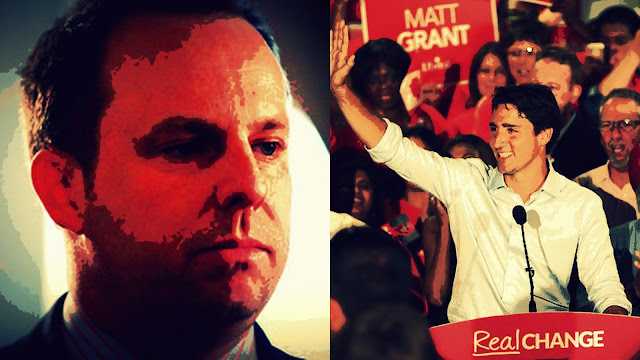 Let it not be said that the Cons will stop at anything to try to bring down Justin Trudeau.

Or that Trudeau isn't driving the Cons CRAAAAZY.

For there was Stephen Harper's former flak Andrew MacDougall yesterday, trying to ruin Justin's Christmas AND his birthday.

By comparing him to the sleazy American rapper Flavour Flav.

While the key to Trudeau’s appeal for some is undoubtedly his government’s coin, for the lay population it’s his energy. It’s infectious and irrepressible. Trudeau’s not there to peck out government policy, not yet anyway. He’s there to keep his team — and the population — moving. He’s the hype man prime minister.

For those of you who’ve never stumbled upon a hip hop org chart, the hype man didn’t drop beats (DJ) or spit rhymes (MC), his job was to hype the crowd. As the opposition struggles to define their public (policy) enemy, they need to understand that Justin Trudeau isn’t Chuck D. He’s Flavour Flav.

A man with a disturbing criminal record. 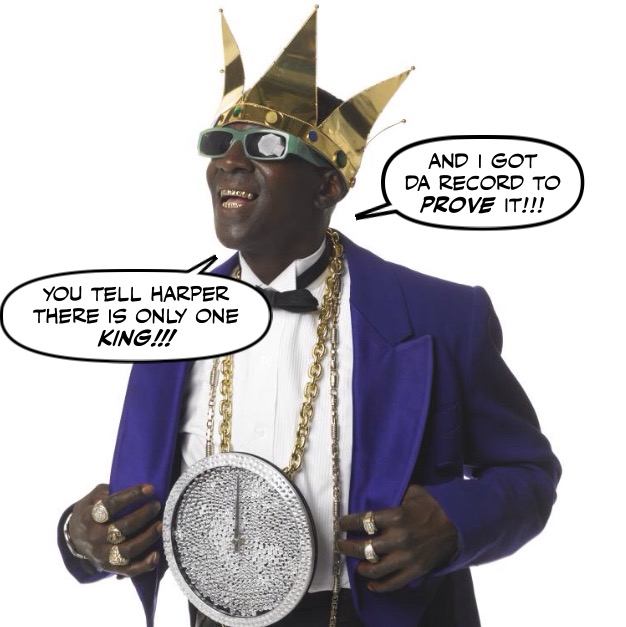 In 1993, Flav was charged with attempted murder and imprisoned for 90 days for shooting at his neighbor. That same year, Flav was later charged with domestic violence, cocaine and marijuana charges...

On October 17, 2012, Flav was jailed in Las Vegas on felony charges stemming from a domestic argument with Trujillo and threats to attack her teenage son, Gibran, with a knife.

Which couldn't be more disgusting, and is just another grotesque attempt to smear Trudeau. 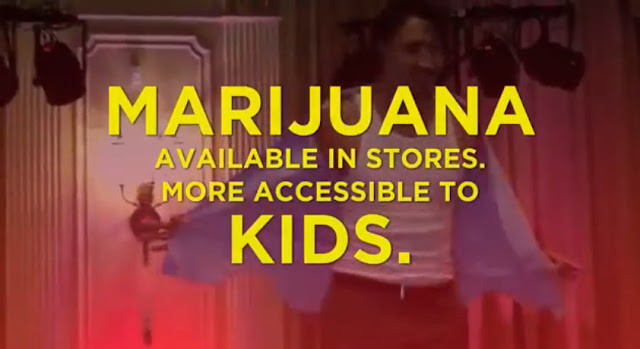 Public Enemy was an epoch-defining hip hop group when Chuck D had something to say, Professor Griff had fresh beats, and Flavor Flav an audience to hype. The moment Chuck D got writer’s block the crowds went elsewhere, and Flavour Flav was just a reality TV star with a huge clock around his neck telling him his time was up.

Or another example of wishful thinking, considering how Justin is clearly capable of defending himself...

Judging by the way he attacked his birthday cake yesterday.

But then the Cons are desperate, they just don't know how to handle a leader as popular as Trudeau.

Who is winning over a whole new generation... 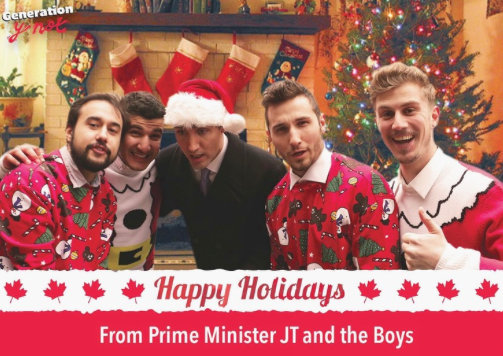 Like these guys who convinced Justin to pose with them to raise money for Syrian refugees.

And who is inspiring many other Canadians with messages like this one.

This year, let’s show each other what it really means to be good. To be Canadian. Let’s open our hearts and share love with those around us.

That appeal to our better angels.

Unlike the ones that used to be excreted by the depraved leader Andrew McDougall served so faithfully and so shamefully... 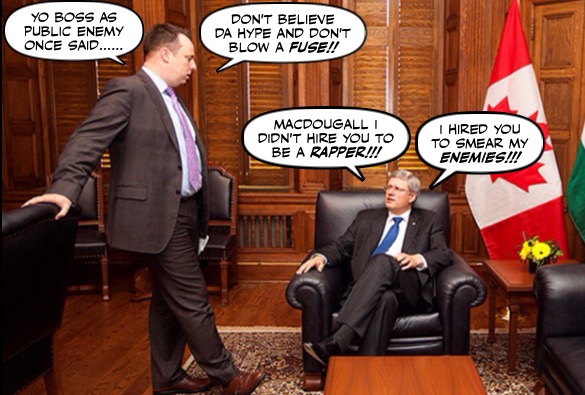 Who tried to drag us into his gutter, the only place where he could hope to win.

And was in fact THE hype man prime minister.

The one who spent gazillions of dollars of OUR money promoting HIMSELF.

The scummy oil pimp with the clock around his neck... 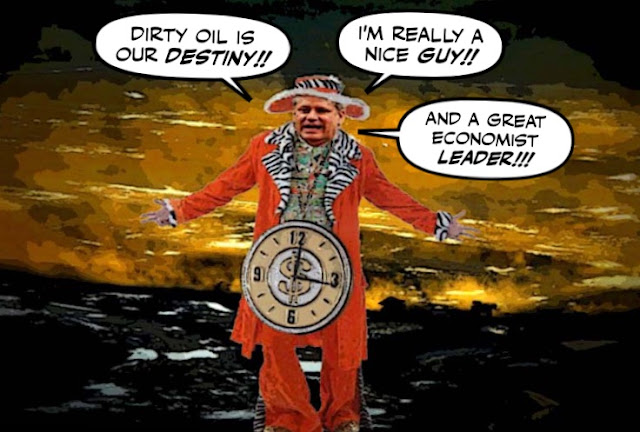 Whose time finally ran out.

You know, I have no idea why the Cons are still living in denial.

Or why with the help of the Con media they keep playing the same dirty old games.

But what I can say is they are low creatures. They are more dead than alive.

And helping to finish them off will be a real pleasure... 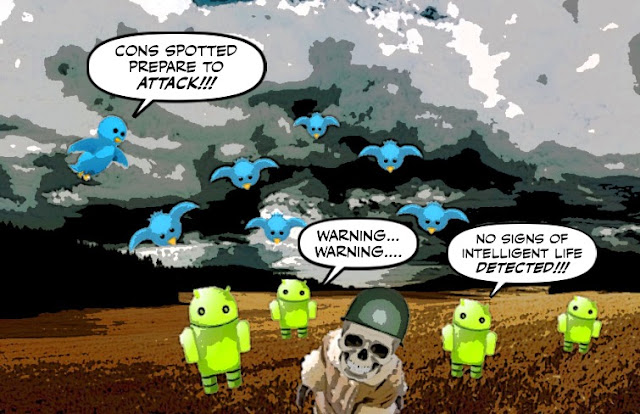 Thank you for the video clip! Its worth a 1000 words, or just two, James Bond. Puts the peanut gallery in perspective.

A belated Merry Christmas, Simon! I wouldn't say ALL Cons are in denial but many have PESD: Post Election Stress Disorder. The average length of time one Canadian party is in power is about 10 years, so the Cons will have to accept it. But their greatest fear is no more first-past-the-post elections!

The odd thing is, this Con line of attack doesn't even make sense. Do most Con voters even know who that rapper is?

The clock is ticking on the Little Prince, all those women throwing themselves at him. After all, he's only human.

As low as they can.

He's a Trudeau. He's proud of being a left of center kind of guy. He's beaten one of their own up quite resoundingly and unexpectedly (but for charity.) And then he did that to them electorally too. It all stings deep into the con psyche.

In my own experience, I've seen that adversity shows the true character of a person. Based on what I've read, the lot of them are slimy shits. To be honest, they were also shitty winners too.

.. lower any expectations re macDougall .. its well crafted pablum. Better to examine how such a greasy PR weasel not subpoena'd to the Duffy Trial gets such a free opinionation ride.. He's much like Boessenkool, Flanagan.. even Ambrose or Clement et al.. or most of the Sun 'empire' of wannabe journalists a la Ms M Wente or the Ezra fantasy friends.. ie certain publishers must insist they get a free pass to spew revisionist history.

Only a Con would even think of something along those lines. I imagine you are under employed and over weight anon 1:15 PM

I don't think all that many people outside of the Con base are listening. Most people are seeing a P.M. who is having a good time with citizens, who are having a good time., like those young men and the P.M.
The Post Media gang and their ilk can say what they want, but like they say a picture is worth a thousand words and those pictures of Trudeau, well they say it all and so much more nicely.

Oh bitter, bitter lefty. Who will save Justin from himself? Won't be you!

hi TS...you're welcome, I was rather impressed myself. Justin is humiliating the Cons with kindness, but he can't be too ready... ;)

hi David...Merry Christmas to you and yours. And thank you for all the help and support and story ideas you have provided me for so long. And you're right, the Cons are in an absolute panic over the idea of electoral reform. Which of course should only motivate us even more to make sure that they get what they deserve...

hi lagatta...yes you're right, it is rather bizarre. I had to look up Flavour Flav because I had never heard of him. If I had never heard of him, I'm sure most Cons hadn't either. And I can only think that Andrew MacDougall was only trying to make us believe that he is hip or cool. Which again coming from a Con like him couldn't be more ridiculous...

hi anon 1:15....I very much doubt that Justin Trudeau will be swayed by the adulation of his fans. He seems very in love with his Sophie, and who can blame him when she seems such a beautiful person. So as I said in my post the only clock that was ticking until it suddenly stopped was the one Stephen Harper was wearing....

hi anon 8:52pm...I don't understand why you believe that lefties are bitter. We're partying so hard we're practically collapsing from exhaustion. At least I know I am. And I don't think Justin needs anyone to save him from himself, when he just saved us from Harper and his Cons. And they are the ones who are bitter...

hi Dan...I'm afraid you're right. They will try to go after Trudeau as hard as they can. But then they did that for years and it didn't work. Because Justin Trudeau is so obviously such a nice guy, attacking him has always backfired on his attackers. And I expect that to continue. But yes the Cons were lousy winners, and now they couldn't be more shabby losers...

hi salamander...I couldn't have lower expectations of MacDougall. Anyone who worked for Harper is in my opinion worthy only of contempt. And why so many media outlets seem willing to publish anything he writes is simply beyond me. But I suppose the Con media will publish anyone who attacks Justin Trudeau, even if it says more about them than it says about Justin. It is simply pathetic, but it will get them nowhere...

hi e.a.f.... yes you're probably right, I don't think many people even care what a Con like MacDougall has to say about anything. The way I see it he's just trying to soothe the shattered Con base, and vent his and their frustration. I think we're in the anger phase now, but it will soon turn to depression, and the Cons will soon start drinking heavily and start slurring their insults, and we can just ignore them...

Hi Simon, I should have taken the high road on this one. I apologize to anyone I offended by using stereotypes. The evening before I had been reading PMs autobiography, particularly about his brother Sacha who was lost in that tragic accident. I lost two cousins in same way ten years before Sacha. I think that those who remember that, and passing of PET two years later can understand the depth to our PM in all of his life experiences. We all go through these things, but he's done it with such grace. Now, to see his lovely family...well pics are 1000 words.

So when anon 1:15 PM posted that comment, I reacted in a viscerally. Again, I apologize if I offended anyone by my use of stereotypes.

Yes, cons are going to go through those stages of mourning with their denial, anger, and depression. Hopefully the latter will come soon enough. They are tiring.

Cheers to you and your sunny ways,

Michel Trudeau was the brother who died in an avalanche while skiing. Sacha is alive and well.

Thank you for correction.