Stephen Harper and the Loonie Apocalypse 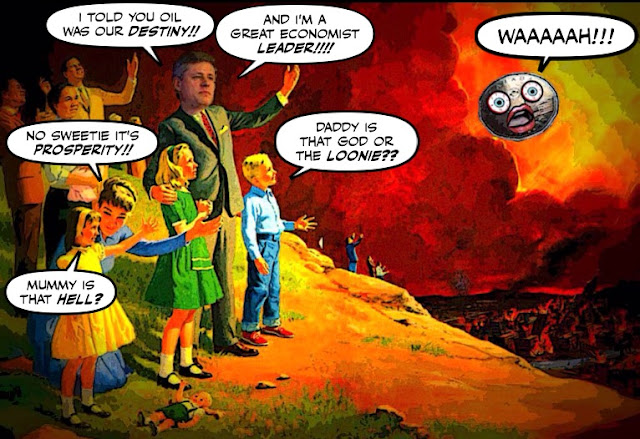 He promised he'd lead us to prosperity, in the golden tar ponds of Albertonia.

He spent a billion dollars of our money trying to brainwash us into believing that he was a Great Economist Leader.

But now the chickens, or the bats from hell, have come home to roost.

And it isn't The Rapture.

It's the Oily Inferno or the loonie apocalypse. 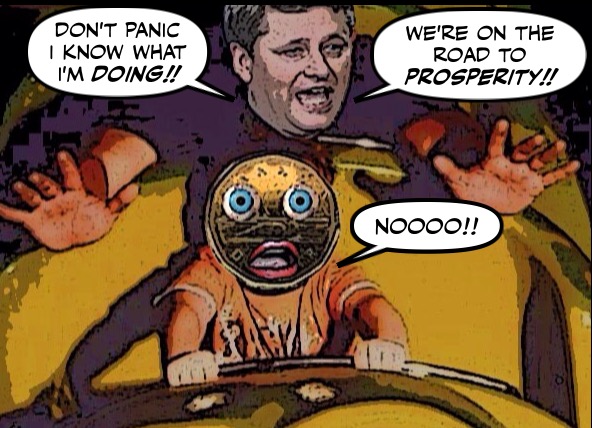 Plunging oil prices dragged down the Toronto stock market by more than 300 points — about 2.4 per cent in mid-afternoon trading — as the Canadian dollar fell to levels not seen in more than a decade.

The price of oil also dropped $2.25 to $37.85 a barrel, falling to levels not seen since the 2008 financial crisis roiled world markets.

Because he didn't know what he was doing. He was no Great Economist Leader. He put all our eggs into one oily basket... 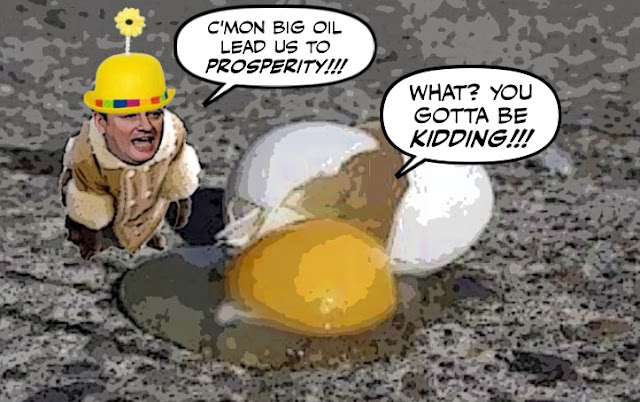 Only to end up with egg all over his face.

And to make matters worse, the tanking loonie couldn't come at a worst time. Just as millions of Canadians are making plans to escape their icy fate... 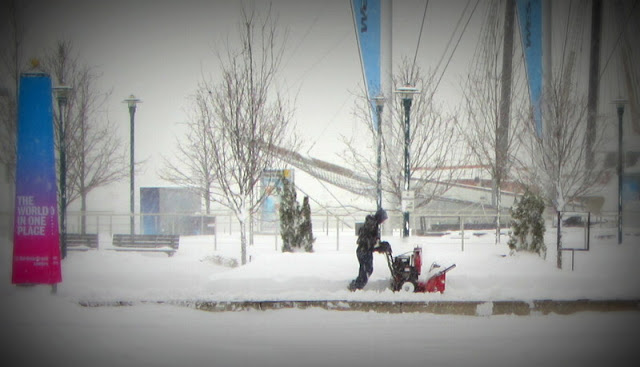 Only to realize, like yours truly, that we're not going to get anywhere near a sunny beach this year... 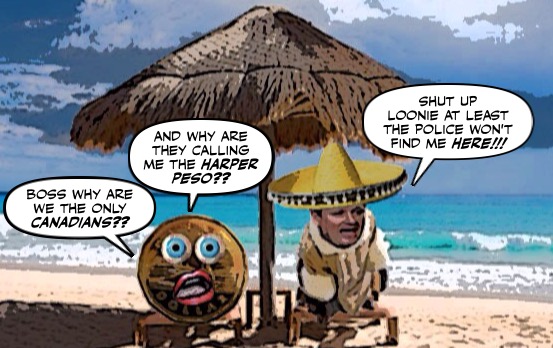 Not with the loonie heading south, and our shrinking credit cards...

The next time the ghastly Lisa Raitt blames the state of the economy on the Liberals, or accuses them of wasting money on child care for the Trudeau children... 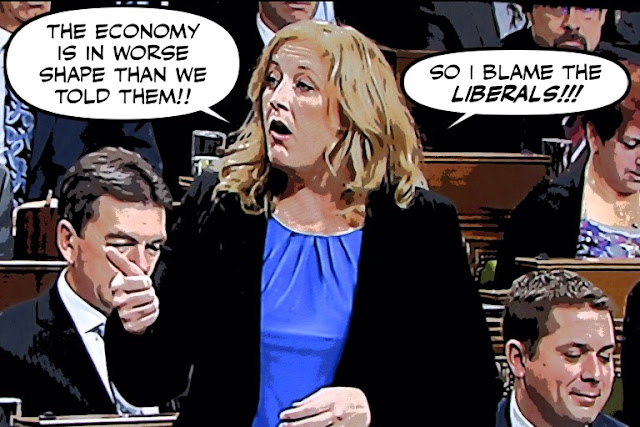 We can ask her to look into her own past... 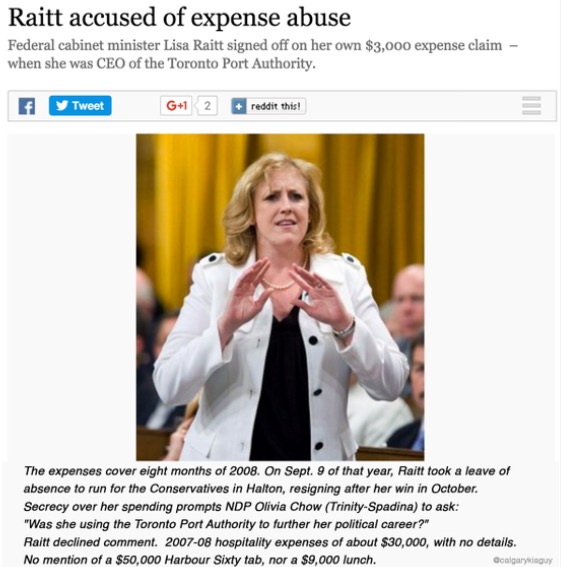 Or ask her to ask Stephen Harper about this one.

Former prime minister Stephen Harper's own department spent more taxpayer money on public-opinion polling in 2014-15 than any other, asking Canadians about niqabs, ISIS and the Senate as preparations for the October federal election kicked into high gear.

Newly disclosed figures show the Privy Council Office spent $554,000 to the end of March this year — more than twice the $250,000 it had originally budgeted — on surveys and focus groups.

Because that's a REAL scandal.

We are going to use that one and all the others against them.

And yes, with a little bit of luck, the whole Con gang will follow their depraved and incompetent leader.

Down the hellish hole where they all belong... 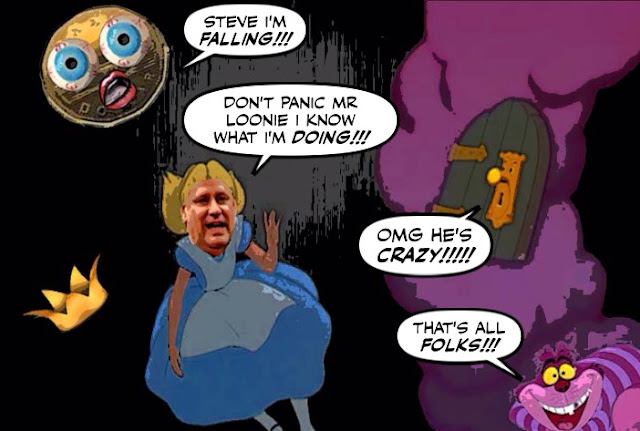 It only seems right to me that the man who made them in his ghastly image.

Should be the one who helps destroy them...

Oh, well if they can't go to warmer climates, they will just have to stay home and spend their money here. I'm not all that concerned about that part of things. What is of concern is the growing cost of food and other necessities as the loonie tanks. salaries are not going up at the same rate. In B.C. people on welfare and disability haven't had a raise since 2007. Every time you walk into a grocery store things have gone up again.

A lower loonie may improve things for some manufacturing sectors. it may help exports and it may encourage people to buy Made in Canada. It costs less.

Our dollar is tanking because it was tied to oil. Saudi Arabia and a few of their friends have decided it isn't a good thing to have others make money on oil, so their decision to pump more, to make other oil more expensive is what is the problem. Some have reported higher oil volumes was to squeeze out Russia as "punishment" for the downed jet over the Ukraine. My take, it was to squeeze out Canada, and the U.S.A. because our oil costs more to produce. With us out of the way, Saudi Arabia and co. are back in the drivers seat and our dollars continue to flow to them. they in turn have money to fund terrorists. this causes the west to spend more money on war, leaving these countries in a weakened economic condition.

North American would just be smarter to not deal with Saudi Arabia. yes it has cheap oil, but what is the real cost? thousands of unemployed in Canada, etc.

The Great Economist didn't hear of boom and bust? Anyone in Canada who has worked at all with natural resources knows this fate. After working in the mining sector in late 80's, I made it my mission to change my career path to stay far away from natural resources. But he had a masters degree from U Calgary, with no working experience, is it any wonder that he fell flat on his face at everyone's expense? If he stays out of jail, I wonder what sort of employment he'll find.

That's easy.... Harper will no doubt get a cushy job on the board of directors of an oil company!

But John McCain shows up for work. Harper has missed the throne speech plus the first 2 question periods. He is becoming a recluse.