Donald Trump and the Disgusting Con War on Women 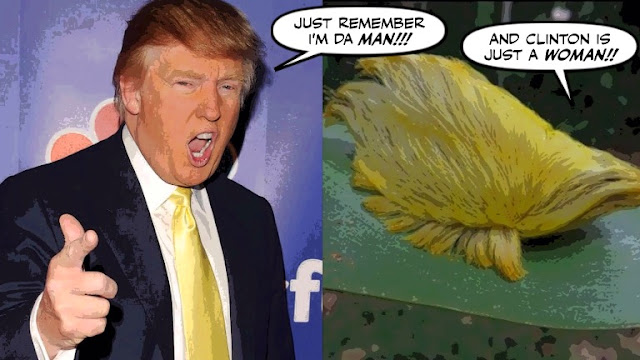 I already knew Donald Trump was a RepubliCon clown, and that every inch of him was poisonous.

I knew he hated Muslims and Mexicans, and anyone who dares stand up to that bully bigot.

But it still stuns me to see how much he hates women.

Republican frontrunner Donald Trump used a campaign stop in Michigan on Monday to make astonishingly sexist attacks against Democratic frontrunner Hillary Clinton.
At one point, Trump told the Grand Rapids crowd that Clinton got “schlonged” by President Obama during their 2008 Democratic primary race.

Trump’s sexist attacks have been an unfortunate hallmark of his presidential campaign. In August, he attacked Fox News host Megyn Kelly after tough questioning in a presidential debate by saying she had “blood coming out of her whatever.” Kelly had asked Trump about his history of describing women as “fat pigs, dogs, slobs, and disgusting animals.”

And it horrifies me to think what his "schlong" problem says about that sexist pig. 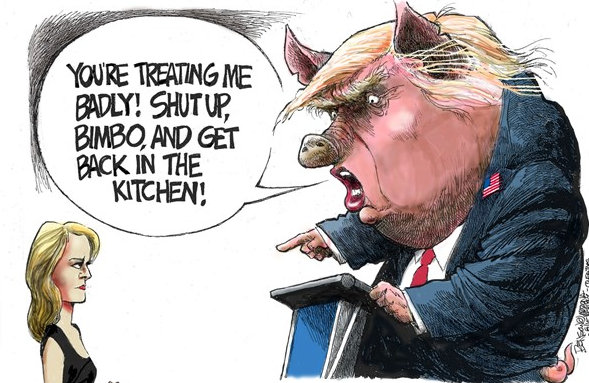 Trump’s primary problem is one loosely oriented around the male anatomy: he thinks people, particularly women, when they lose are getting “schlonged”. He believes that there is nothing more humiliating, nothing more evocative of loss, nothing that epitomizes capitulation in the face of one’s opponent’s triumph than being penetrated by a penis.

If Sigmund Freud could rise from the dead, he’d sit up, point at Donald Trump, say “I told you so” and go back to being dead, assured that his theoretical legacy was secure for another hundred years.

Or the state of gender relations in RepubliCon Amerika.

Fox News host Andrea Tantaros asserted on Tuesday that men in the United States could get their “masculinity back” by voting for Republican presidential candidate Donald Trump.

“The left has tried to culturally feminize this country in a way that is disgusting. And you see blue collar voters — men — this is like their last vestige, their last hope is Donald Trump to get their masculinity back.”

Or what it says about Trump's own obviously deeply held feelings of inadequacy... 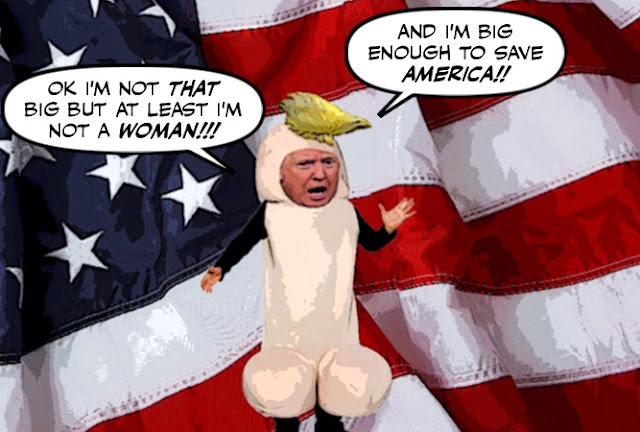 Which explain so much about him, along with his lack of toilet training, or his Great War on Washrooms.

Donald Trump is too busy building a real estate empire and being classy and winning the presidential race to have time to use the bathroom, apparently. No, The Donald doesn't much care for the call of nature. And he has made that abundantly clear.

Although I'd rather not talk about that, lest it bring back bad memories... 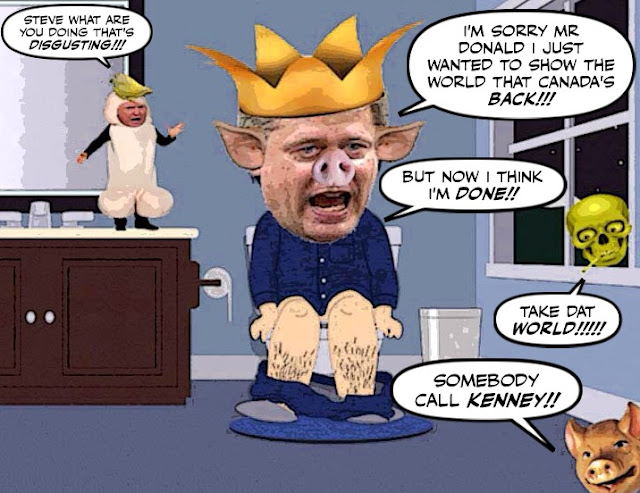 But what I will say is that the Great War on Women and female politicians isn't just happening in Trumpville or Dumpville, it's also happening in Canada.

For as I pointed out the other day, Rachel Notley is being attacked, and deluged with vile threats, for being an NDP leader and a woman.

And now the bigot swine at The Rebel who published those comments, are going after Kathleen Wynne... 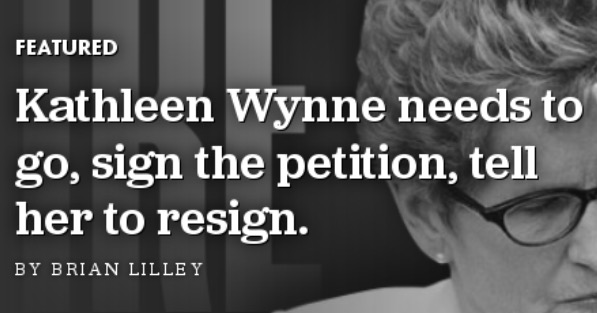 No doubt trying to whip up the same hatred against her, as the Cons have whipped up against Notley.

And Donald Trump is trying to whip up against Hillary Clinton, and other women in America.

When the women in that country are joined by their many male allies, and almost all the young, the Muslims, the Hispanics, the gay people, and all the others who hate everything Trump stands for.

He will be taught a lesson he'll never forget.

One would think that a man who likes to build skyline-altering, metal-and-glass phalluses and slap his name on them couldn’t pantomime his sexual insecurities any louder. It’s hard to imagine the size of the next tower he’ll feel inclined to build when Clinton bests him – will he still call it “schlonged” then? – in the general election.

He will be humiliated or in his mind schlonged further, if that's possible.

And whether he's toilet trained by then or not, he will suffer the same fate Stephen Harper did with his stinky politics of division... 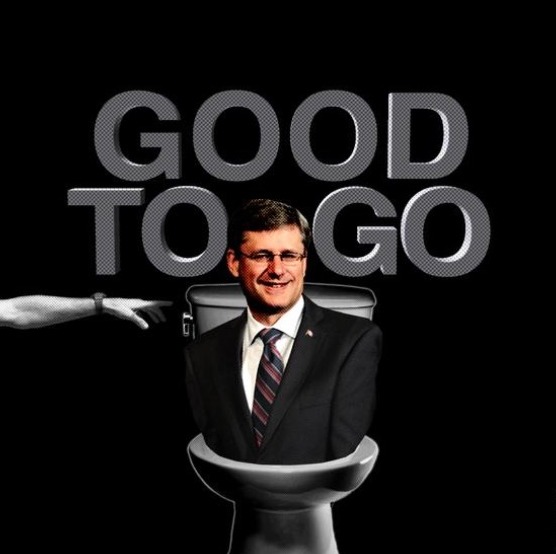 But yes, in this country in the new year, let's make restoring women's rights a big part of restoring our Canada.

Let's demand that our hate laws be enforced.

And flush them all into sewer of history where they so rightfully belong...

Trump, more and more, is sounding like an incredibly insecure person who tries to protect himself with bombast.

He also probably has zero empathy with anyone so attacking any and all who oppose him or even who can get him a small headline in a newspaper or 10 seconds on Fox News is a plus.

He's a bit like a twin of Ezra but most Canadians know Ezra is a twit and, for some bizarre reason, a lot of Americans think Trump is human.

Sounds like a plan. I read somewhere that it would be an idea to appoint only women to fill empty Senate seats. Would not be too difficult to do, and doesn't even need mentioning that they would be qualified, because if JT appointed them, they would be more than qualified. Just look at his cabinet.

All the more reason to join in the fight for clean, accessible public conveniences! This is an important aspect of accessibility, and a public health issue for all, and especially those who have to "go" more often for various reasons. I started a topic on babble on this issue some time ago:

Reactionary moralism and Trumpish disgust have often hampered their development, such attempts to keep women in the home and gay men deep in the closet... So has commodification and privatization of public space. It seems Trump checks off all those boxes!

I do believe Trump doesn't like any one except himself. he just gets up their and opens his mouth and out comes the sewage. Many cheer him on, but I'm sure he doesn't like any of those white working class males either. One of these days some one will get him on tape about that also.

The Donald is an elitist. An elitist of the worst kind, one who has nothing which is elite about him.

Those in Alberta who would blame Notely for the economic problems need to go back and read the newspapers. The problems started before Notley took office. She did not drive down the price of oil. Saudi Arabia did that. they wanted the competiton out of the way. when they started pumping more oil, people thought it was to put Putin out of business, but no it was actually to put Canada and the U.S.A. out of business and they have succeeded.

Alberta's problem is the P.C.s didn't save enough during the good times to tide them over through the bad times and Harper and his Cons thought the gravy train would never end, not thinking Saudi might want to shut him and his anti muslim mouth up.

Many of these men look down on women or hate them. Its because they themselves aren't that great and the only way they can feel better about themselves is to look down on someone else.

hi jrkrideau...on a CNN documentary recently, somebody said that Trump had a big hole in him that he desperately needed to fill. That he is as you say incredibly insecure. And this latest episode only proves that in spades. Unfortunately his no holds barred message resonates with those who see their standing of living eroding, and feel that their world is out of control. And whose ignorance allows them to be easily manipulated. The good news is I don't think his fragile persona will be able to withstand the attack ads the Democrats will fire at him during the real election campaign. But in the meantime the degradation of the U.S. political scene is complete, and couldn't be more disgusting and dangerous....

hi TS...in my opinion we can't have enough women in positions of power, because although one can't generalize thanks to people like Margaret Thatcher, as a whole I find them far more rational and grounded than the men. And I truly believe they are the only ones who can save our world. So yes, appoint them to the Senate, appoint them everywhere...

hi lagatta....yes I really hate seeing those signs on businesses "Our washroom is only for our clients," since as you point out there are not enough public conveniences around. We have a very modern looking and quite large public toilet on our street. I believe you pay 25 cents to use it, and that the homeless can get either the money or a card to use it, so that is a start. But yes we do need to do more...

hi e.a.f...I don't know enough about Trump to guess at what motivates him. But as I said above he is clearly a very insecure person, he has the arrogance of the rich, and there is a constituency out there who want simple answers to complex questions. The reaction of some of his fans reminds me a lot of the way the so-called Ford Nation feels about the Ford Brothers, who although they too are rich are seen to be speaking for those who aren't. Or telling it like it is. That is disturbing enough, and the vulgar way Trump treats women just makes it even worse...