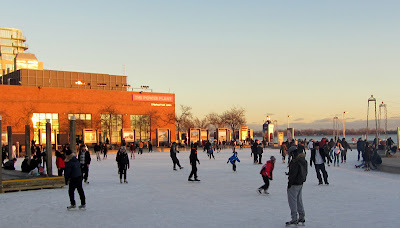 Oh boy. It was such a lovely evening. The setting sun glowed golden. And for the first time this winter it was cold enough to imagine it was almost Christmas in Canada.

For when I went home and put on the TV, I was quickly reminded that it was only almost Christmas in Harperland. 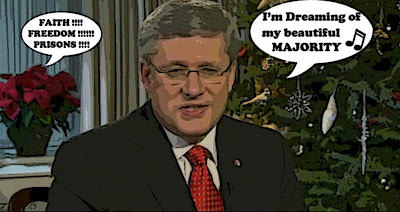 OMG. I don't know what was more scary. When he tried to smile by opening his mouth and baring his teeth. Or when he promised to "keep promoting the things that unite us as Canadians."

But it wasn't until I read Jane Taber, that I really started screaming.

Stephen Harper says the most fun he had in 2011 was winning his majority government. And now Canadians are seeing just how much fun he is having as he pushes through his long-promised agenda of political and justice reforms.

Because after reading the Sixth Estate's excellent if somewhat gloomy Christmas message.

This government has outlawed strikes, blown the national budget buying the better part of $100 billion in shiny new toys for the military, and expanded spy agency and police powers to the point that they can now freely monitor what emails we send and what Internet sites we visit without even so much as a warrant. And so far, they have only held a majority in Parliament for one year. We are at their mercy, and they have only just got started with us.

I also can't help be reminded that this is one Christmas present we gave ourselves. For being too dumb to UNITE.

Oh well, at least nobody can blame me for not trying to warn people eh? I tried, I tried. But of course nobody believed me. How many times have I heard "Oh Simon REALLY, don't exaggerate. They may be Cons, but this is Canada."

And how can I forget this stinging rebuke from Red Tory?

But you know what? I'm not sorry at all. I think my big mistake was being too SUBTLE.

I should have warned people about the dangers of a Harper majority by running this video instead...

But then you know what they say eh? He who laughs last laughs best.

Dear Santa, please bring me lots of books to read in prison.

Putting thought of the crazy scary man aside and sending Happy Christmas wishes to you, your partner and Kerouac.

May your 25th be filled with happy times and belly rubs.

Seconding sassy's best wishes to you, Sebastian and Kerouac.

And I promise to send books if you do the same for me.

Simon, like you, when I gaze out into the next four years of being forced to live in the Harperreich, I fell as if I'm staring into a bleak, cold, black, bottomless that will, in some twisted way, still manage to get worse - much worse - in ways we dare not even guess at yet. But not tonight; not on a night filled with lights and parties, friends, family, celebrations, Christmas trees, good food, and joy. I will put out of mind, for the moment, the evil of Harper, Ford, and the rest of their neo-Nazi ilk, and hope that better, more just, and humane men will somehow soon replace them.

Like you also, I'm an atheist, and the time of year holds no religious significance for me anymore. But you can sense in many people an eagerness for this holiday week, closing the aging year with friends and hoping the New Tear coming will turn the way of the people and not fall further into the clutches who have no need for more wealth or power.

Eat, drink, and be merry for a while. Step away and catch your breath. Recharge your batteries and love those around you and see again with fresh eyes what IS wonderful about this land we love, and what a lie Harper wants it to become for we are under siege and soon the battle for the lives of our countrymen, there freedoms and ours, must be rejoined...

I did not have the balls to turn on the TV to watch Harper spiel his load of Christmas bullshit upon the nation, so kudos for your courage in doing so. Harper simply makes me puke; among so many other things such as pissing all over our democratic structure and Parliamentary democracy itself, he's reached new heights in stopping any progressive environmental policy. Between you and I Canada can't handle conservatives of any stripe. Money is their sole priority, and how fast they can stuff it into their wallets. Dollars to donuts any person you knew in your youth who was an asshole then, is a conservative today. As for Jane Taber I am expecting to see in the new year an episode of Question Period where she actually crawls under the table during an interview with Harper to start blowing him. She's a joke.

hi sassy...thank you and Merry Christmas and Happy holidays to you from the three of us.
We had a very quiet time since most of our friends were out of town, but I quite enjoyed it.
And the four legged one was never so spoiled... :)

Hi Beijing...thank you and all the best to you too. And thank you for your offer to send books. I'm afraid I may have to ask you for a Bible, for I understand that in Harper's prisons, if you memorize one, you get three days off your sentence... ;)

hi Neil...thank you for that good advise and you can be sure I will heed it. As you must have realized by now, I do try too hard sometimes to turn everything into a joke, but only because laughter motivates me to keep on fighting for a better world. Because of course the situation couldn't be more serious. A Harper majority, and most likely a recession, I couldn't think of a worse situation. One of the things that most depresses me is the feeling of helpless despair that is consuming many progressives. So I think your suggestion to eat, drink, and be merry is an excellent one. We should all recharge our batteries and come back stronger than ever. Hopefully with some fresh ideas on how best to challenge the Cons, and eventually defeat them.
All the best to you and yours in the new year...

hi anonymous...I'm glad I spared you from watching Harper's Christmas message, because it really was scary. I was glad it wasn't on the wide screen TV because, and I kid you not, his cold dead eyes never looked more sinister.
I've never been too fond of conservatives,and I fear you may be right:

Dollars to donuts any person you knew in your youth who was an asshole then, is a conservative today.

But I am absolutely convinced that the reason the Conservative Party has fallen to such depths is entirely due to Harper's personality. For history will record that even when he did the most unreasonable insane things, not one member of the Conservative caucus had the courage to publicly disagree with him. So we may be forced to temporarily live in state of depression, but they will live in shame forever...