The Oil Sands and the Banana War 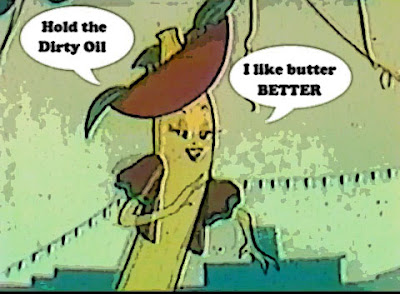 Oh. My. Monkey. It looks like Chiquita Banana is giving Canada's oil sands the cold shoulder.

The Ohio-based company said it will work with environmental organization ForestEthics to eliminate shipping of Chiquita bananas with fuel from refineries that use Canada’s oil sands.

Which of course had Great Banana Republic Leader stewing in his own fumes.

“We will continue to work hard to get the real information out there. Obviously, this is misinformation. And the fact of the matter is the emission from our oil sands are comparable to other heavy oils and that the industry continues to invest and continues to find ways to reduce those emissions,” Harper told reporters in Toronto.

Harper said it is absolutely clear that the need for Canada’s oil is “just overwhelming.”

No doubt preaching to his fruity base.

According to a recent international poll, Canada has the highest number of citizens (22 per cent) of any economically advanced country who deny that human activity causes global warming. We can fairly presume the vast majority of this 22 per cent are in what we might loosely call the conservative world in Canada.

While Ezra Levant, the high priest of that ignorant rabble, was going...um...bananas... 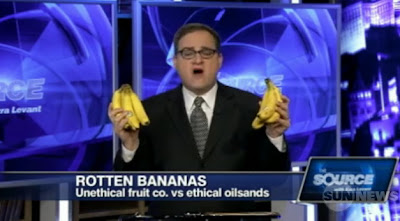 Vowing NEVER to eat a Chiquita again, even if its fried in "ethical oil." While swinging from the roof of the studio. And no doubt blaming the CBC.

Except get used to it. Because now that Canada has proudly declared itself to be an environmental rogue nation, we're ALL going to pay for it.

A right-wing country full of climate change deniers, that is prepared to sacrifice the future of the planet for its short term economic interests, makes a real easy target.

Good one Cons. You idiots. 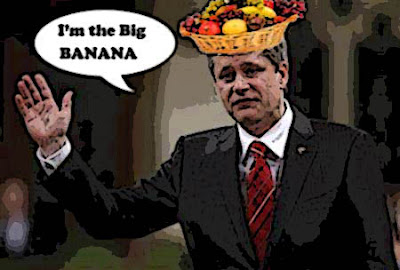 Have to disagree with you on this one (big surprise I know). Better to support strong unionized jobs here than companies that collude with terrorists.

Yeah, because supporting strong unionization is this governments raison d'etre. Give it up already WWU, no one with two clues is buying what you are attempting to sell.

No, Omar that would be my raison d'etre.

"...no one with two clues is buying what you are attempting to sell."

If by this you mean oil, well we seem to be doing pretty good up here.

Look, Omar, I'm sorry I don't have some grand noble cause here. But in the end, as I commented on another post regarding this topic, the benefits I derive support my young son and in the end that is al I care about. If you have a bone to pick with the government, feel free. But don't deride people who just want to do a job and support a family.

I would say your grand and noble cause is as an agitator on progressive blogs. Why are you here exactly? What is your angle anyway, Mr Northern Smooth talker? So you're a big union supporter are you? Great. So am I. Have been since 1979. And how the this sorry excuse for a government treats organized labour is appalling. Simply and utterly appalling. Tell me pal, what do YOU make of Harper and his goons and how they treat the working men and women of this country? Lets hear your take on what is happening all too often to the working men and women in this country under Harper's boot heel. Or is it all OK for you as long as it's just airline employees and postal workers who are targeted and then degraded?

Whenever a corporation does something immoral or even evil, the right wing proclaims loudly that government regulation is not the answer, but that we should vote with our wallets!

Now when some wallet-voting happens that's likely to actually have a real impact, for once, there's nothing but outrage.

And well Suncor's operating in Syria, China's investing in Canada's bitumen sands, and Canadian natural resource countries are the worst globally for being ethical and respecting human rights...

Omar, you obviously don't like the government...okay I get that. You are going all off topic onto side issues now.

You're right, I shouldn't agitate... I should just continue to buy from Chiquita and fuck all those people in central America.

Why the hell can't I just make a simple statement of my opinion without people like you going all ballistic? Am I supposed to be impressed that you've been a union supporter since 1979? Yay! Let me give you a cookie.

"...is it all OK for you as long as it's just airline employees and postal workers who are targeted and then degraded?"

Uh no dumb ass....my girlfriend works for Canada Post. It seems you people are intent on only throwing union workers who work up here to the wolves.

WWU, are you not at all concerned about the future world your young son will inherit? How about all the young children growing up in developing countries which will bear the brunt of climate change?

I don't want to live in a world of dead and dying forests, polluted air and water, extinct wildlife, and franken food. Our government could be proving employment in renewable jobs instead of the Tar Sands, and we could fight global warming, protect the environment, feed our families, and hold our heads high.

LMA....I assume then, since you are so concerned with the future, that you are fully prepared to give up all the modern conveniences that use oil?

I grew up near Toronto. Trust me. I know bad air quality. Its no secret here. You can easily go on line and check it here. And I've seen nothing in the time I've lived here that makes me think its any worse than smoggy Toronto. There are many way to help the environment other than focusing so intently on one thing.

I always find it funny that people who have never been up here think they know what the environment is like here. I would invite you to come up here and see for yourself. You might just be surprised. The city has won Communities in Bloom 5 years running.

Obviously, I care about other parts of the world. That's why I refuse to purchase Chiquita products, the proceeds of which fund terrorist groups. The money derived here, stays here. It benefits not just Fort McMurray or Alberta, but all parts of the country. Fort McMurrayites donate more to the local United Way here than any other city in Canada.

The government could be providing jobs, yes. Personally, I'm not waiting on the government. As you progressives say yourself, it doesn't work. If things were really as bad here as some people say and the environment is about to tank at any moment I don't think I"d be here, obviously.

WWU, you don't seem to understand the seriousness of the situation. Earlier this year in an essay entitled "Silence is Deadly" available @ Climate Progress.org, James Hansen wrote:

"The Tar Sands are estimated to contain at least 400 GtC (equivalent to about 200 ppm CO2). Easily available reserves of conventional oil and gas are enough to take atmospheric CO2 well above 400ppm, which is unsafe for life on earth. However, if emissions from coal are phased out over the next few decades and if unconventional fossil fuels including tar sands are left in the ground, it is conceivable to stabilize earth's climate. Phase out of emissions from coal is itself an enormous challenge, but if the tar sands are thrown into the mix it is essentially game over. There is no practical way to capture the CO2 emitted while burning oil, which is used primarily in vehicles."

With Tar Sands production set to triple by 2020, environmental damage is going to get a lot worse in Alberta, and Canada's GHG emissions are going to soar. By then, it will probably be too late to act, and the youth of today, including your son, will be left with the consequences.

BTW, I am of an older generation and I am used to living with few "modern conveniences". It is the beauty and bounty of the natural world that makes life worth living, not the latest car or gadget.

Interesting how an issue regarding human rights abuses get twisted around and used as an argument against the Oil Sands.

2000 civilians killed by terrorists with US backing.....sorry I don't find that funny.

hi Way Way Up... I don't want to pick on you because you're definitely outnumbered in this comment thread.
But really the only point I wanted to make was that by making a big deal out of the withdrawal from Kyoto, they have only focused more attention on the oil sands, and emboldened its opponents.
Secondly, I did note that Chiquita is a strange company to get up on an ethical high horse.
And thirdly, whatever we feel about the oil sands, surely all reasonable people must be distressed that so many Canadians don't believe that global warming poses a threat to all of us...

I would definitely agree with you on your last point there Simon. I did see to day that the local college, as part of its speaker series, has a gentleman coming later in the spring to deliver a lecture having to do with climate change over geological time here in Fort McMurray. For a minute I thought the sky had fallen when I read that. Not something one would expect to see here. It did however pique my interest and I'd love to hear what the man has to say. I hope others do to.