Attawapiskat and Our New Canadian Flag 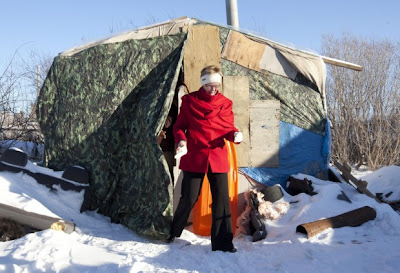 It's going to be -21 degrees and feel like -30 in Attawapiskat today. Where some families are living in tents and plywood shacks like this one.

So what is our hideous Con government doing, more than a month after that poor little community declared a state of emergency?

Preparing to send  them 15 modular homes.

The federal government has bought 15 modular homes for the remote first-nations community of Attawapiskat, but Aboriginal Affairs Minister John Duncan is holding out the possibility that the impoverished reserve may ultimately pay the bill.

Maybe as late as JANUARY.

Mr. Duncan told reporters on Friday that the homes would be delivered as soon as the surrounding lakes freeze and the annual ice roads become open.

And only if that impoverished community pays for them, like they're paying for this Con Injun Agent.

The federal government is forcing the troubled Attawapiskat First Nation to pay a private-sector consultant about $1,300 a day to run its finances — even though the government’s own assessments say the third-party management system is not cost-effective.

Can you believe this outrageous bullshit? Is this Canada, Apartheid South Africa, or North Korea?

And where are our glorious armed forces? When they've finished "liberating" Libya, and serving as a free taxi service for Peter MacKay, do you think they might try to save our own people?

Gawd. You know the other day the Guardian ran a story on multiculturalism in Canada.

And when the story was first published somebody in their editorial department made a really big boo boo... 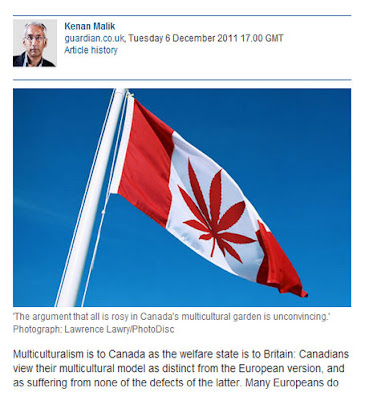 As some of you spotted, the original image used to illustrate this article wasn't a Canadian flag at all, but a very similar one with a Cannabis leaf in place of a Maple leaf. The Cannabis leaf flag was labelled wrongly in our picture database as "Canadian flag" and the rest is human error.

Which would be hilarious eh? If our grotesque Cons weren't ramming through a fascist crime bill that will send even more Canadians to jail for the "crime" of using marijuana.

And if we we weren't living in Stephen Harper's Canada, where CRUEL has replaced COOL. 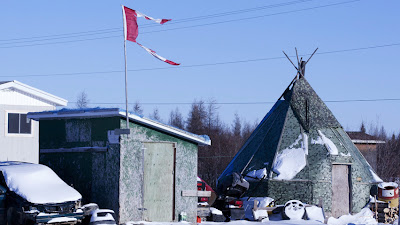 Keep digging stephen. We can still see your head.

Fifteen modulars? Wow. A local First Nations, but non-band funded corporation bought two for three thousand each, because closed down schools didn't need them anymore, and it's hard to find buyers for them. Therefore the cost for them shouldn't be too excessive, and I'm sure the band wouldn't mind paying for them, but if they have to pay up front, then it's going to become a problem, as the Canadian government just doesn't cover that sort of purchase for bands. This sort of deal's going to add further to the band's already debilitating dept.
Sure, it's easy to modify them for specifics needs, but there's the worry if the government transports them to the community, then this 'temporary' solution will become permnament once the newspapers lose interest in the unfolding events. It wouldn't be the first time the Harper government's left a First Nations community with a half-hearted solution for a crisis.
If I were to counsel the band, I don't know what I would choose. Should they accept the modulars? I just don't know, because I have little to no faith in the government, whatsoever. There's just been too much abuse from it.

A BC band under 3rd party management also raised the same points, Sayunsa,
out of their own similar experience - temporary solution became permanent.

Anyone see Duncan's presser yesterday? There's something wrong with him. I don't mean that in a snidey casting-aspersions-about-his -mental-competance-because-I-don't-like-what-he's-saying kind of way. I mean there's something clearly wrong with him. His handlers/minders completely took over answering media questions, then shuffled him away.

This is typical too little too late. And I wish this was an isolated case but it unfortunately isn't. A former student of mine was discussing this situation with me last night on Facebook and told how she always feels like she is returning to a camp when she flies home from university to visit family. 10 years ago gov't hacks visited her community and identified numerous problems with the state of housing in her Nothern Manitoba community. I recall a lot of talk back and little else. She let me know that while the powers that be are well aware of the problems, pretty much has changed in the decade since I lived there. This is beyond pathetic.

I find it disturbing that the government's first response was to make sure we all understood that this crisis wasn't THEIR fault. Instead, they make sure that the now infamous "90 million dollars" was brought up and brought up often, leading everyone to believe that there surely was some sort of internal corruption afoot. To my understanding, reserves have their finances audited yearly, so I fail to see how this could have been such a shock to the feds. The mainstream media has done a good job too of perpetuating this theory of mismanaged funds and missing money, without a shred of proof, mind you. I'm not saying that reserve corruption never happens, it does like in any impoverished (and wealthy too) environment on earth, greed can affect anyone, but it shouldn't be the go-to assumption whenever there is a Native population in trouble. The comments you read from ordinary folks on sites like the CBC, Toronto Star, National Post, etc, etc are very disgusting for the most part, nothing like a story about First Nations people to stir up the bigots and get them into a frenzy. I guaran-damn-tee you if these were little blue-eyed blonde girls freezing to death, the response would have been to fix the situation ASAP, and there would be no talk of how much it would cost the taxpayer. Anyone who even brought cost up would have been labelled a villain...

I did hear that regular citizens managed to raise almost 300,000 dollars in aid through private donations, which does restore my faith in my fellow Canadians a little bit.

hi thwap...by the time the Cons stop digging that hole they should be half the way to China... ;)

hi Sayunsa...I don't know what the band should do, but I trust them to do the right thing more than I do any Con from Ottawa. Because the way the Harper government has treated that poor little community is simply inexcusable. And the only reason they're acting like they are now is because Big Daddy was embarrassed, and now they're going to pay for that. As I've said before this should not be a partisan issue,but everything this government does is political, and they are totally shameless...

hi Alison...I saw the tape of that Duncan newser too, and it appeared to me that he is on his way to a total nervous breakdown. His press people were treating him like a child, and it was both scary and pathetic to watch.
No doubt Big Daddy is furious with him for making him look like Scrooge instead of a world statesman... ;)

hi Way Way Up... pathetic is the right word. It fills me with helpless rage to see our beautiful native people being treated so shabbily. No doubt we need to look for creative long-term solutions. But in the meantime we need to move mountains to help the people of that community, before children and seniors get sick and start dying. If we can't do that, what kind of a country are we?

hi Rev Effect...yes it was truly disgusting to see how the Cons wasted so much time trying to blame others instead of mobilizing every reserve they could to come to the aid of that little community. And yes I have noticed the ugly comments from those who would accuse all native leaders of being corrupt. When the real horror and corruption is that some people should be living like that in a country as rich as Canada.
Also two figures stick in my mind. One that it costs $250,000 to build a house there because of labour and transportation costs. So money doesn't go as far as those bigots think it does. And two, the roughly $9,000 dollars each person receives, is about the same as the amount of money spent to house a federal prisoner each year. Which only makes the situation even more shameful...

Maybe look at where much of the blame should lie and that is with the chief (mayor) and her boyfriend the "financial manager" as well as the other 18 "council members" who all take huge salaries out of the millions that are poured into this community every year. Not to mention the money they get from the diamond mines on the reserve.

Just my take on the situation