Rob Ford and the Big Lie 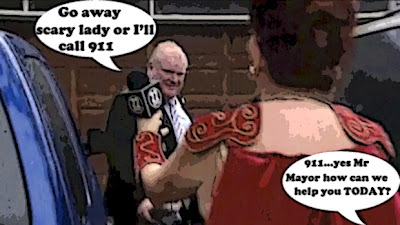 Well at least we know one thing eh? When Rob Ford called 911 because he felt threatened by the comedian Marg Delahunty. And then used the F-word when talking to a dispatcher, because police didn't come quickly enough.

It wasn't because they didn't know where he lived.

According to numerous police and emergency service sources, 911 calls to the mayor’s Edenbridge Dr. home are a reality for the South Etobicoke division. Exactly how many calls have been made is unknown.

Now I don't give a damn what goes on in the Ford household. In fact I'd rather not think about it.

But considering that he used the same dirty trickster whose organization went after Irwin Cotler, to help him get elected. Considering that he has shown himself to be a crass homophobe in a city full of gay people.

Considering that he is raising transit fares starting Sunday, AND reducing service. While riding to work in a van, and giving ordinary citizens the finger.

But couldn't find about one million dollars to save three homeless shelters, including one for women.

So the number of soiled mattresses in this waterfront park just keeps going up... 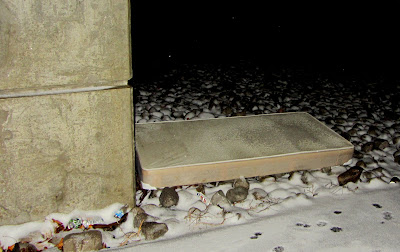 As does the chance that some poor homeless person will freeze to death this winter, while the millionaire mayor sleeps in his warm and comfy bed.

Considering that like his good buddy Stephen Harper he's a hideous bully, and just about everything he says is a Big Lie.

From service cuts to layoffs of city workers to higher user fees for city services, every one of Ford’s election promises has been broken. Those on which he’s delivered have only dug us deeper into a financial hole.

Under his watch, City Hall is a tinpot dictatorship in the grip of a tough guy with a cult-like following backed (or is that created?) by a propaganda machine churning out one big lie after another.

Considering all of the above, the story about the 911 calls only reinforces what I already believed.

When you vote for a classless lout, you get the mayor you deserve.

And of course, no matter how hard you try.

You can't put lipstick on a hog... 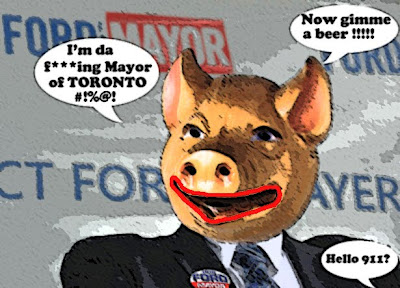 Too bad we can't call 911 to save a great city, or a great country eh?

So we'll just have to do it ourselves.

I've been reading that Rob Ford's whereabouts during the day are often a complete mystery to the press.

If that's true, it might explain why Mary Walsh and crew went to hizzonner's house to film him.

THAT was supposedly a big faux-pas. But if the guy's hiding all the rest of the time, ... well shit'll happen. And it also adds another lie to his list of lies that day: "Why didn't they come to where I work? They know where I am."

Robbie Rich is a typical righty, he likes to socialize the costs. As BCL points out, he should hire his own marriage counselor instead of using 911 for that.

Ford should get out of the GTA and take lessons from our mayor here in Fort McMurray. She's fantastic and though I've only lived here 2 and a half year I don't ever recall hearing anyone utter a disparaging word about her. All this mess wit Ford reminds me why I never liked Toronto and will never move there.

hi Thwap...well I understand he takes a day off every week to attend to his family business which seems outrageous to me.
And one really has to wonder who is the REAL mayor of this city, Rob or Doug Ford?
I fully expect one or the other or both of them to be driven from office by some scandal before their terms are up.
But even if they aren't, they will continue to harm the Con brand, and sooner or later the chickens will come home to roost....

hi anonymous...yes I saw that quip and it fits. He was elected on a promise to get rid of the "gravy." But since he couldn't find any, now he's just informed us that actually what he meant was he was elected to "cut government down to size." Which of course is news to all of us, and plants him even more firmly in the teabagger camp. When the teabaggers go, so will he...

hi Way Way Up...yes I must admit that Alberta is setting an example with their choice of mayors, because the one in Calgary is excellent too.
As for Toronto it has had pretty poor mayors before, like Mel Lastman, the guy who was ridiculed for calling in the army to deal with a snow storm. But somebody told me that at least Lastman loved the city, and Ford just doesn't.
Also don't be too hard on poor Toronto. When I moved here my friends in Montreal told me I would absolutely HATE it, but I've become rather fond of Hogtown, and it does deserve better...