What do Bachmann and Kenney Have in Common? 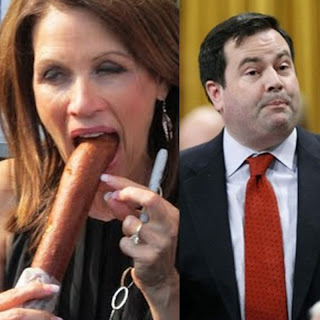 Michele Bachmann believes that gays should be able to get married as long as they marry somebody of the opposite sex.

And of course, so does Jason Kenney.

"Marriage is open to everybody, as long as they're a man and a woman,'' said Kenney.

"It doesn't say you can't marry if you're a homosexual. The fact is that homosexuals have been married and do marry.''

And since they're both religious fanatics, they also probably agree with the crazed Christianists of the American Family Organization.

Who claim that if gays are allowed to marry, people will end up marrying not just dogs. Woof. Woof.

But also buildings and CARS !!!!

And what do I have to say about all of the above?

And since unlike the Cons I have some moral values eh? And I know the Bible says a gay man can only have six wives. Not forty like the others.

I'm going to have to say this too:

Jason, I'm so sorry. But that red devil has stolen my heart. So I'm going to have to DIVORCE you.... 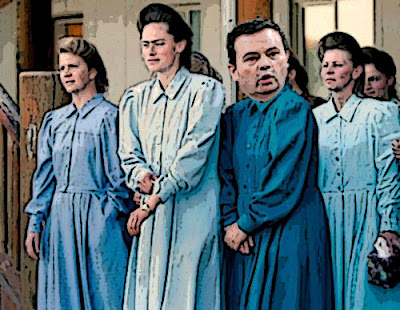 The difference between Bachmann and Kenney?

One is a failed Republican candidate, considered even by moron Teabaggers to be too stoopid to be President.

And the other is one of the most powerful ministers in Lord Harper's majority government. You know... this Canadian government sinister regime.

That still has four years to do with us, as it wishes. Or as its Lord commands.

You know there's something terribly wrong when morons like Bachmann and Kenney can say such profoundly stupid things and get away with it. No challenge whatsoever from a savvy journalist. The mere suggestion of gay people marrying the opposite sex speaks volumes of the level of disrespect they feel they're entitled to hurl which would not be tolerated if hurled back in their direction. Great thing to say if you're not gay, would either of these two idiots marry someone of the opposite sex if they too were gay? Doubt it, but it's ok to force on someone else.

That's the problem with bullies, they're not subjected often enough to the ridicule they richly deserve when holding opinions like those expressed by Bachmann and Kenney.