Peter MacKay and the Outraged General 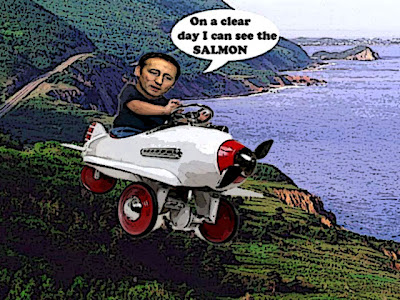 Well if you remember, when we last left Peter Dumbo Mackay he was happily buzzing over Newfoundland, on his way back from a fishing trip, and claiming he was late for a military demonstration.

MacKay ----- Uh...remember when I told you that fishy story? Well it was a whopper.

Defence Minister Peter MacKay found himself on the defensive Thursday over internal department emails suggesting he used a search-and-rescue helicopter in July 2010 for personal reasons and not to participate in a military demonstration, as he had told Parliament.

In fact, the emails — obtained by Postmedia News through access-to-information — indicate military officials intentionally trotted out the idea of a training mission as a way to cover for MacKay's private use of the Cormorant, which military officials had warned would generate negative media attention if discovered.

"When the guy who's fishing at the fishing hole next to the minister sees the big yellow helicopter arrive and decides to use his cellphone to video the minister getting on board and post it on YouTube," Ploughman wrote, "who will be answering the mail that one?"

Meanwhile back at National Defence Headquarters, General Walter Natynczyk, who has had his own Air Tax Payer problems.... 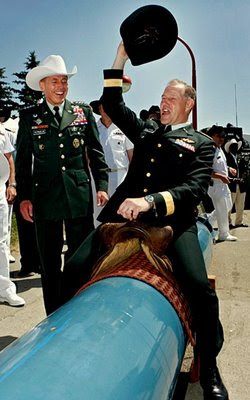 Is no doubt wondering who torpedoed his outrageous outrage.

Canada’s top soldier has written a memo to his troops defending flights he and Defence Minister Peter MacKay take on the government’s executive jets and criticizing media coverage of the matter as “sensational” and “misguided.”

You know when a military that is receiving billions of dollars from the Harper regime, for all kinds of dubious projects.

Becomes so chummy with that regime that it's apparently willing to cover-up the truth, we've got a REAL problem.

Yeah, yeah, I know. I'm sure Peter MacKay would like the taxpayers to give him a shiny new corporate jet, with enough room for his golf clubs and his fishing rods, as a Christmas present. And clearly the General needs a fast and very comfortable way to get to hockey games eh?

But I'm so outraged, I feel the General should only get a shiny box of toy soldiers, if he promises not to let politicians play with them.

He's not cute enough to be a keyboard cat.

This is much more his speed:

hi Beijing...ha ha ha... BRILLIANT. And fishy too. They should definitely nail that one on a wall in his office, so it can greet people when they arrive, along with Dumbo's fake dog... ;)

I guess Canadians have to understand. Harper's tough on crime, does not apply to him and his Conservatives. Our tax dollars, go right down the toilets of, Harper and his thieving Conservatives.

Harper is a fascist dictator. He said, I am the government. I am the law. I make the rules.

No one dared to question Hitler nor Stalin. Harper has the same arrogant attitude. That's why he needs his Stalags. Harper knows Canadians will rise up against him.

Harper wants our military to fight in his stupid wars. However, he will not support them if they are disabled. I would be telling Harper to go to hell, and get out of the military as fast as I could.