The Montreal Massacre and the Murdered Legacy 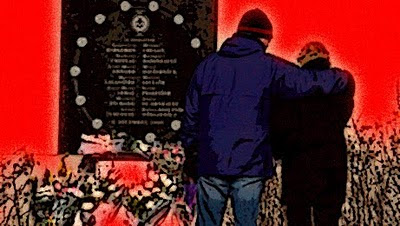 For how could those grotesque Cons mourn those murdered women? When they are greasing up their guns to murder their legacy.

“Even as we mourn the 14 women killed at l’École Polytechnique, this government is taking the last remaining safeguard off the very weapon that murdered these women,” Ms. Turmel said. “The Conservatives are recklessly dismantling the only positive thing to come out of the tragic events of Dec. 6.”

Spitting on their graves, and shattering the lives of those who loved them, and along with so many others worked so hard for 22 years to make Canada a safer place.

Free from this kind of violence...

People like Suzanne Laplante-Edward, mother of Anne-Marie, who is seeing the living memorial to her daughter destroyed by those ugly teabagger Cons. As she looks on helplessly.

Or twisted into something monstruous, by these callous gun nutz.

When in fact the only political agenda was the Con plan to appeal to those too lazy, too cheap, too dumb, or too paranoid to register their guns, like they register their cars. And use it as a wedge issue to inflame and divide Canadians.

I have seen the horror of gun violence up close, and it disgusts me.

So I will never forget what those evil Cons have done, and all those who put their greedy, selfish interests before the safety of all of us.

And of course, until the end of time.

I will always remember them...

I'm actually more outraged at the stupidity of those who voted those shameful western reformatories into power. Essentially that's what they are and their birthplace is in my backyard. To think we have another 4 years of reading about and living their disgusting, racist, backwards agenda. Sickens me and how dare they shame these wonderful women by destroying the registry that has saved countless lives.

hi BC Waterboy...yeah I think about the people who voted for the Cons a lot. I wonder whether some of them at least are regretting what they did. I hope so because their shame will last forever.
But of course, we progressives must also share some of the blame for failing to unite. I wish I could say we have learned our lesson, but I'm afraid that I see no sign of that. As for the gun registry, when I saw how Suzanne Laplante-Edward pleaded for somebody to do SOMETHING, my heart just about broke. What a bestial country we are turning into. And what will we look like in four years?

Actually Simon, this is pretty much exactly what we wanted.

We're quite firmly of the opinion that owning firearms shouldn't be used as an excuse to systematically violate our rights under the Canadian Charter of Rights and Freedoms. C-68, now known as the Firearms act establishes that people who choose to own firearms must in effect also surrender all of our Charter rights, effectively giving us absolutely no protection under the law. We have only the good will of the police keeping us out of jail, and it has been that way since 1996, or 1997.

I don't expect you to be capable of appreciating that unpleasant reality. Or perhaps you feel that this is justified. If this is the case, then we shall have to agree to disagree.

In the meantime, perhaps it would be a beneficial exercise for you to think about who it was who answered the call, when we had the audacity to ask for the return of our precious rights under the Charter.

That's right, it was the Cons you hate so much. And nobody else but the Cons were willing even willing to talk to us.

To answer your question, no, we're not ashamed in the least. Rather, we hope the non-restricted firearms registry is only the beginning.

hi anonymous...look I have always made it clear that I prefer to live in a society with less guns rather than more of them. But that doesn't mean that I don't recognize your right to own a gun after the mandatory checks. All I'm asking is that you register them.
I know the gun lobby is always trying to scare gun owners into thinking that police will take their guns away, but I don't believe that for a moment.
What I do believe is that this issue has been conflated into a bigger one than it should be, and that a little rationality would help us all...

Your prerogative Simon. I'm not one to shove my choices down other people's throats. I just want my Charter rights restored in law.

First the state has already confiscated some firearms - any pistol with a barrel length under about 4 inches, for instance. No, that's not all of them of course. Will it ever happen? I honestly don't know, and it's not something that I'm particularly worried about in the here and now. So you can relax, I'm not here to debate that particular doomsday scenario at this time. Sure, it's possible, and it's happened before, but we're not there yet.

I do have one question. Register them, WHY? Could you explain to me how we benefit from registration? Does it make you feel safer? And why? Personally, I think it's not rational, but hey, give it a shot, I'm always happy to be surprised by something I hadn't thought of.

I'll concede this, the registry in particular would be a non-issue but for two salient points. First, 2 billion is entirely too much for a database. This situation seems to have been caused by friends of the Liberal party who helped themselves to the public trough, but I don't know for sure. On this particular point, I ambivalent. Yes, it sucks. Do I care that much? No, alea iacta est, I can't do a damned thing about past errors. But it does make great political fodder.

Second, are the penalties. It's often said "we register X, Y, P and Q, why not guns?" because these other forms of registration are considered benign and inoffensive. Except of course that if a firearms owner makes a mistake, even a momentary license lapse, they face criminal charges. That means a criminal record which will haunt them. Allan Rock insisted that this be the case, and that seems to have been well-documented.

If it weren't for those two factors, well, I guess I agree, we probably wouldn't hear much about the registry.