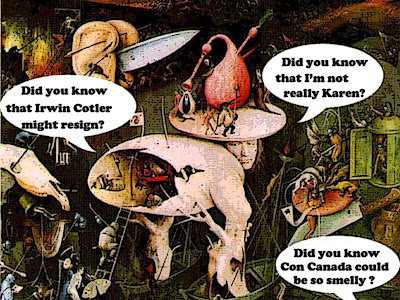 Golly Sherlock can you believe this? The polling company behind those phony calls in Irwin Cotler's riding is feeling a little heat.

A trade association that represents Canadian marketing and polling firms says it is looking into complaints about controversial phone calls into Liberal MP Irwin Cotler’s Montreal riding made by one of its members.

So what does Nick Kouvalis the company's principal partner have to say about that?

“We’ve done tens of millions of dials through our call centre and there’s never been any complaint launched against us,” Kouvalis said. “We’re in the business of getting Conservatives elected and ending Liberal careers. We’re good at it.”

And look Sherlock there's more. It also turns out that the company not only worked for Speaker Andrew Scheer's campaign in the last election.

House Speaker Andrew Scheer’s dismissal of Liberal MP Irwin Cotler’s complaint that he was the victim of a dirty-tricks telephone campaign in his riding meant one of the top figures in the Conservative Party of Canada avoided being called to Parliament to defend his consulting firm’s role in the affair.

Which really makes me wonder about that ruling, and why Tubby Van Loan defended those dirty tricks in such a disgusting manner.

And as for Nick Kouvalis, I'm sure you remember this fake tweeter during Rob Ford's campaign for Mayor.

Who pretended to be a George Smitherman supporter only to smear him over and over again.

And then turned out to be a man.

The Twitter account was the work of the deputy communications director of Rob Ford’s campaign, Fraser Macdonald, and was created with one purpose in mind: getting the whole recording of a conversation between Dieter Doneit-Henderson and the candidate, in which Ford promised the fibromyalgia-afflicted man that he would “fucking try to find” OxyContin for him.

And what did Nick Kouvalis, Ford's Deputy Campaign Manager, have to say about that and a fake call to a radio show?

Kouvalis denied the anonymous call and fake Twitter account were “dirty tricks,” portraying them as a normal part of campaigns done by all sides.

Oh boy. In a column today Noah Richler wonders whether progressives should turn the table on these grubby Cons and their spinmasters.

Imagine if, not so long ago, Michael Ignatieff had responded to Conservative Party attack ads claiming “He didn’t come back for you,” by turning to Harper and saying, “What, you couldn’t get work anywhere else?”

Oh, for someone to turn this demagogic bunch awash in dirty tricks, but apparently immune to scandals, into the thing that would swiftly undermine them — a joke.

Which I must admit is tempting eh? But in this case I would prefer a public inquiry so we can find out what's really going on, and how far the Con rot has spread.

George Orwell once famously wrote that " in a time of universal deceit telling the truth is a revolutionary act."

But I would rephrase it this way. In a time of dirty tricks and the Big Lie, only the truth can make us clean again.

Only the truth can save our country...

“We’re in the business of getting Conservatives elected and ending Liberal careers. We’re good at it.”

Is that legal? I mean, party spending is limited under the Elections Act. Say the Conservatives go to these guys for an election and receive a service costing $100k. Then say that NDP go to these guys but are quoted the exact same service for $300k.

Is there not a hidden subsidy here since the service and its price aren't subject to the free market? Donations of services and things other than money to political parties also need to be declared.

First there were many incestuously close Conservative ties to this marketing group, which raised the spectre that it's nothing but an appendage of the Party and its partisan apparatus. Now the company's principal partner says straight out that they exist only to support the Conservative politburo. If they're providing Con MPs special deals with a nod and a wink, that should count against Conservative spending.

Are there any "shadow" partners funding this organization because they've already hit their yearly political donation limit?

The speaker had a clear duty to declare this conflict of interest and recuse himself this matter but instead he laid bare his partisanship. This is going to be a much longer four years than I ever imagined even in my most darkest of nightmares

hi anonymous...you ask a lot of good questions for which I have no answers. All I know is that something about this really stinks, and I hope that some in the MSM will try to dig up the truth. I'm finding it hard to distinguish between the activities of the polling company and the hideous Con war room.
The destroy your opponents mantra seems awfully familiar, and the dubious activities during the Ford election campaign make me wonder what other dirty tricks may yet to be uncovered. We have truly reached the bottom of the barrel and we need some sort of inquiry...

hi Kev...yes both Scheer and Van Loan do have some explaining to do. And since at least 40 other Cons have apparently used the services of that ghastly company we all need some answers badly. I detest dirty tricks no matter what party they come from, but coming from the Cons it is truly frightening...