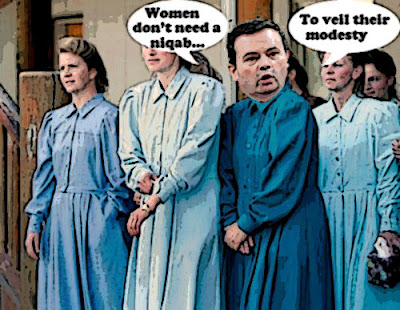 So I find his new war on the veil totally ridiculous.

It seems unlikely that a woman would go to the trouble of applying for citizenship, taking the test and paying the fee without a genuine desire to be classed as a Canadian citizen — just so she could secretly get away with not saying the oath.

And not just for all those excellent reasons, but also because even if nobody was wearing a veil at one of those mass swearing in ceremonies, how would we know that anyone in the room was REALLY reciting the Citizenship Oath?

I mean have you ever seen a group of Canadians singing O Canada? At first glance they would all seem to be singing the national anthem.

But if you were a lip reader you'd realize they were really singing something like this:

Because they know that when in a crowd, as long as they keep opening and shutting their pie holes, nobody will know the difference.

I mention this because a lip reader has just examined the tape made by Rick Perry, a Christianist fanatic like Kenney.

You know this tape... 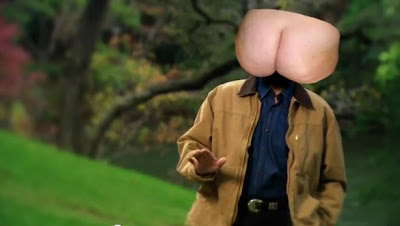 And discovered that it wasn't an anti-gay message after all...

Bad Lip Reading: Rick Perry's "Strong" ad - watch more funny videos
How could it be? When the music was a rip off of Appalachian Spring by the great American composer Aaron Copland.

The gay Jew who supported the Communist Party.

So now I'm thinking eh? If you can't trust what you see and hear, what difference would a veil make? And what is Kenney's problem?

Is it an attempt to distract us from other more important stories like Attawapiskat, or Kyoto?

Or is it just bigotry?

Why should administering a citizenship oath be so problematic?
Unless, of course, the government is simply singling out a tiny number of women to curry favour with the majority. But that would be bigotry. Kenney believes in “full and equal” membership in society. A good place to begin would be to resist the impulse to punish those who are different – however much we disagree with their beliefs.

And I'm sure you know what I think eh? All of the above.

The Harper Cons; distracting the dumb, and dividing the country.

Crap that WAS Copeland too. I thought the background music rang a bell for some reason. This sad video has become even more pathetic in my book now as Copeland is arguably THE iconic American composer of the 20th century.

The contempt party are experts at timing. This policy announcement comes right in the middle of the Shafia "honour killing" trial.

hi Way Way Up...Gawd. Try not to make me look ignorant eh? I'm afraid I had no idea that it was taken from Copland. But I did think I was the best part of that horrible ad. And now that I do know I find it wonderfully ironic. Honestly if that guy ever became President we'd all be in a lot of trouble...

hi Beijing...I hadn't thought of that, but of course everything the Cons do is planned by their monstrous War Room, so I wouldn't be surprised. Muslim Canadians have been shocked and smeared by those horrible killings. So you think they might have shown a little class, instead of pouring gasoline on the fire.
Oh boy. Sometimes I just can't believe what is happening in Canada, it feels like a nightmare that just goes on and on...

Is anyone really fooled into the thinking the extreme Roman Catholic Religionist Jason Kenny gives a damn about womens equality?

If he did he would also ban the husband and male relatives of the woman in the veil from taking the oath as well.

We just took our citizenship test this month and should there be a woman who is forced to remove her veil at our swearing in ceremony. My first act as a Canadian citizen will be to apologize for the behaviour of my new country. We will fight to stop the conservative menace from destroying this beloved nation.

A citizenship oath is a public act. It can't be undertaken behind a mask or cover of any sort without damaging its integrity. And wearing an islamic covering is also not a socially neutral "choice" that one makes only for oneself. Coverings of these sort are essentially a political marker indicating full, visible submission to islamic law and its enforcers on earth (the woman's male guardians). Consequently, the failure to wear it soon becomes a visible act of defiance and an emblem that a woman is refusing to submit. Such a woman is not protected by the islamic social contract and may be attacked and harassed with impunity as a punishment for her defiance of the visible norms of shariah. Because of this dynamic within the islamic community, submitting to sh*t like this is basically an act of aggression and a threat directed at women who choose not to wear it - both muslim and non-muslim. Moderate muslim countries like Turkey and Tunisia have, in the past, enacted partial bans in order to disrupt this very dynamic (so pretending it isn't real - or a real threat - flies in the face of both onserved reality and common sense).

" . . . Norhayati Kaprawi is a Malaysian activist whose recent documentary Aku Siapa (Who Am I) deals with the issue of how women in Malaysia should dress. She found some women unwilling to show their faces in her film - not on religious grounds, but because they feared reprisals. . . "