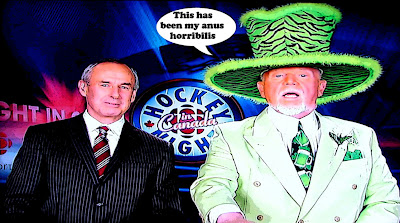 Well as you no doubt know Don Cherry has probably had his worst year ever eh?

All those NHL concussions, and all that terminal brain damage, have no doubt taken the shine off his rock'em sock'em videos.

Now even Raffi is going after him for being such a bully.

And I'm afraid it's only going to get worse.

“Geez, you never know what he’s going to say any more do you? He’s like a nutty uncle mowing the lawn in his underwear, isn’t he?,” James says.

But all I can say is he may be our nutty uncle, he may be a bully, he may be the leader of the Moron Nation.

But who knew he was so talented?

Golly that was good. I can hardly wait until he plays a zamboni.

Play him out Keyboard Cat Man...

For some reason I was thinking about Cherry's declining popularity myself today. (Albeit for only a couple of minutes.)

I think that to a degree Cherry was treated as a change from the ordinary by a lot of Canadians. He was boorish and loud, but he was a family man with his wife and his dog (though people tell of seeing him with young ladies at his table at one of his "Grape-vine" restaurants).

But now he's become the poster-boy for this right-wing, bullying, in-your-face-stupid-and-lying-and what are you going to do about it? mentality that we've seen far too much of.

A sizable minority of shit-heads like that sort of crap, but most Canadians don't. They might shrug their shoulders in the face of it, but they also get up to get something from the fridge or go take a piss when something like that comes out of the tv screen.

When he talks hockey he knows his stuff, when he pontificates on non-hockey subjects he can get pretty silly.

Nothing wrong with a good solid hit in hockey but the cheap head shots are turning our beloved pass time into a farce.

And let's not forget that Cherry's mentality spreads like a disease and (potentially) costs talented young players like Sidney Crosby, their careers.

Time for Cherry to fade into obscurity.

hi thwap...if I was writing a book about the decline and fall of Canada I'd give Cherry a whole chapter. Because not only has he contributed mightily to the goonification of our national sport, he has also played a huge role in the glorification of our military, and the mixing of the two. Just like they do in the United States, where no game is complete without a trooping of the colours.
As much as I support the CBC, I can never forgive them for letting that old reactionary from prattling on for so long...

hi Way Way Up...I'm afraid I don't agree with you that Cherry is a good hockey analyst. The only smart thing he has ever supported is calling an icing as soon as the puck crosses the line.
But apart from that most of his analysis is so disorganized and full of absurd Cherryisms, for a serious look at what really happened I'm forced to watch hockey games in French.
As for the state of hockey it's truly depressing, with so many good players sidelined with scary head injuries.
But it's not just the rules that have to change, or the equipment that has to be improved, I honestly don't believe we can make the professional game safer unless we make the ice surface bigger. And of course that would mean taking out seats, so good luck with that one...

hi BC Waterboy...I completely agree with you, the greed of the NHL is mostly to blame of course, but Cherry has been their cheerleader, and his bad influence has negatively affected the game all the way from the NHL to the Pee Wee Leagues. The man is an absolute disgrace, and if I didn't have that piano video to share, I probably would have been harder on him. Damn... ;)