The Homophobic Zombies of Jamaica. Again. 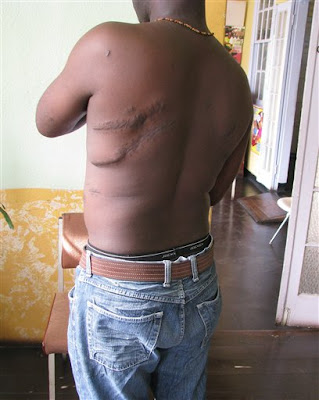 This is what homophobic violence can look like in Jamaica.

A group of men kicked him and slashed him with knives for being a "batty boy" — a slang term for gay men — after he left a party before dawn in October 2006. They sliced his throat, torso, and back, hissed anti-gay epithets, and left him for dead on a Kingston corner.

Where you can't count on the police because they are no better than the bashers.

Sherman, meanwhile, is simply trying to move on with his life. But he said he will always remember how, after his attack, patrolmen roughly lifted his bloodied body out of their squad car when a man admonished them for aiding a "batty boy." A woman shamed them into driving him to a hospital; they stuffed him in the car's trunk.

And if you're a lesbian it's OK to rape you.

In 1996, when she was 20, Chin came out as lesbian on the Kingston UWI campus. She said she was ostracized by her peers, and one day was herded into a campus bathroom by a group of male students, who ripped off her clothes and sexually assaulted her.

"They told me what God wanted from me, that God made women to enjoy sex with men."

So all gay people must live in fear.

"I'm living in fear on a day-to-day basis," he said softly during a recent interview in Kingston. "In the community where my ex-lover was killed, people will say to me when I'm passing on the street, they will make remarks like 'boom-boom-boom' or 'batty boy fi dead.' I don't feel free walking on the streets."

In a country thousands of Canadians visit every year. Soaking up the sun and the cheap rum, while gay people are being attacked and murdered.

And nobody says or does anything to stop it. Especially not Stephen Harper's Cons, whose rabid base hates gays as much as those homophobic zombies do. 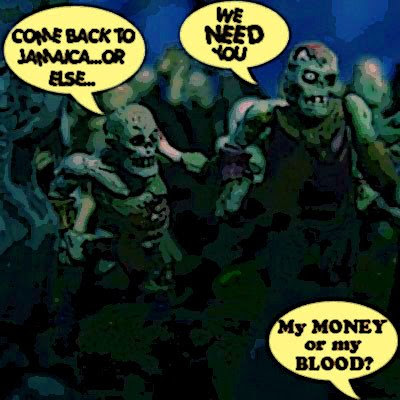 Who are so crazed with hatred they are killing themselves with their own poison.

The dread of homosexuality is so all-encompassing that many Jamaican men refuse to get digital rectal examinations for prostate cancer, even those whose disease is advanced, said Dr. Trevor Tulloch of St. Andrews Hospital.

"Because it is a homophobic society, there's such a fear of the sexual implications of having the exam that men won't seek out help," said Tulloch, adding Jamaica has a soaring rate of prostate cancer because men won't be screened.

Help save the poor gays of Jamaica from this madness. Help give the homophobes the finger.

Tell their evil government to stop the HATE.

i woudln't go to jamaica on several grounds:
1. homophobic
2. too much violence
3. the 'new' rastafarians suck and bob marley is probably rolling in his grave (though there's a group of serous rasta musicians that gives the thumbs up or down to some of the wretched lyrics)
4. jamaica and rastafarian are totally patriarchal...even though the original artists like marley were cool with their music, they thought it was ok to have harems and oodles of children with the mothers taking care of them.

the gay bashers there are probably on 'the down low'.

oh ya, famous stupid people is on!

Hi Scout...I wish I could go to Jamaica, I visited it once and it was beautiful.
And I absolutely love reggae music.
But you're right it is a violent and patriarchal society that has been sadly corrupted by the religion of the colonialists...who were the ones who introduced all these anti-gay laws to the Caribbean, and to so many other places.
I'm still hoping the island will become a better more friendly place for gay people.
But I'm afraid the hate is so pathological I'm no longer optimistic...