Stephen Harper and the Christian Nation 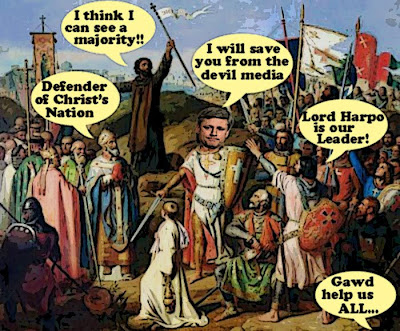 Well I see the strain of his disastrous and horribly embarrassing European tour has finally driven Stephen Harper off the deep end.

First he allowed the sinister theocons in the PMO to go after the gays. Then he ran away with the holy cracker. Then he started attacking Iggy for something he hadn't said...like a man possessed. Then the ratzy Pope blessed him with a fountain pen in the shape of a religious column.

Now he's declaring himself the Defender of the Christian Nation in Canada.

And attacking the heathen media for trying to stir up religious intolerance.

Prime Minister Stephen Harper has blamed the uproar over his handling of the Holy Communion host at former governor general Romeo LeBlanc's funeral mass on people trying to cause embarrassment and create division between Catholics and Protestants.

"People who want to cause embarrassment in religion and drive a wedge between Protestants and Catholics" are driving the controversy, Harper told a Catholic news agency in an exclusive interview after his meeting Saturday with Pope Benedict.

Holy Moly. Great Embarrassing Leader accusing others of causing embarrassment and playing wedge politics? How much more of this SoCon insanity can we take? Do we call a psychiatrist, Jason Kenney, or an EXORCIST?

And are these Cons deranged religious fanatics, miserable homophobes, or just IDIOTS?

Pride Week is not the celebration of diversity its supporters claim. Rather, it's a polarizing special interest event which represents a narrow cross-section of society. It's not a festival that brings Canadians together in the same way Canada Day celebrations, supporting our troops rallies, and Santa Claus parades do.

Yes, some heterosexual conservatives don't understand the gay lifestyle for religious and/or personal reasons--but that doesn't mean they want to lynch them or bring back sodomy laws. Rather, it's typically recognized as a difference of opinion, and that's that.

The Santa Claus parade? The gay LIFESTYLE? A "difference of opinion" over who we ARE ? The Cons are NOT homophobes?

Do these wretched bigoted SoCons take Canadians for idiots?

And are they wrong?

Because let's be brutally honest. Any country that is prepared to tolerate this hateful nonsense and this mix of religion and politics. And doesn't see the danger...or the madness of a man possessed.

And can't even unite to face this threat.

Will not long survive as a country.

And deserves what it gets...

Check out this video...

Couldn't have said it better myself.

Except add the word DANGEROUS....

I'm still hard pressed to find anything done by Harper that would indicate a Christian spirit in the man.

Remember the court challenges program? Status of Women and its defanging?
And those are only two.

I challenge anyone to find just ONE thing Harper has done with totally unselfish motive--just one.

And that piece in the Canwest papers was parroted yesterday by Kevin Newman on Global National.

If you don't get Canwest one way, you'll get it another way.

Time for a major shakeup in this land and I don't mean just the Harperites. I also mean Canwest Global.

I'm still hard pressed to find anything done by Harper that would indicate a Christian spirit in the man.

My advice? Don't bother looking for it because it's not there.
Harper is one of those Christians who use religion to force a vengeful order on their confused world, and bludgeon their opponents. i.e. NOT a Christian.
As for CanWest Global...I'm one of those few lefties who is hoping it survives. Because despite their right-wing tilt, there are some decent journalists, and the more of those the better.
And also because frankly the others ain't much better...