The Bigot Burning of Diane Ablonczy 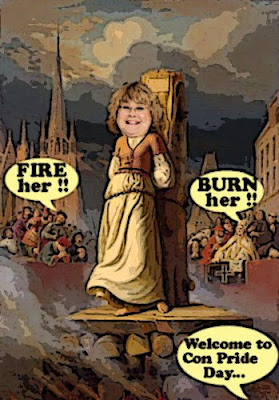 Once she was a Reform Party star from Peoria. Then Stephen Harper clipped her wings because she was too close to Preston Manning...and he hates powerful women.

Now they're burning her at the stake for supporting the Gay Pride Parade.

Saskatchewan MP Brad Trost, a fellow Conservative, told the anti-abortion website LifeSiteNews that Ablonczy was being punished for the decision to give $400,000 from the Marquee Tourism Events Program to Toronto's Pride Parade, which was held this year on June 28.

And what is the Con Ministry of Propaganda and Disinformation saying about her public humiliation? It's just a....um..... coincidence.

Cunningham confirmed that the program is being reviewed, but he said that also had nothing to do with the Toronto parade and was simply a matter of good government practice.

Oh boy. Why do those lying Con porkers always take us for IDIOTS?

When in fact they are in a squealing panic because the dumb homophobe Brad Trost has just given away their most closely guarded secret. By revealing who is REALLY running the PMO.

You know, these sinister theocons.

I warned they were burrowing into the PMO like maggots, and now they're calling the shots. Religious fanatics like the piggy homophobe Charles McVety.

The guy who claimed he could get Stephen Harper on the phone anytime he wanted. And is now running this petition on his website.

The porker who started squealing about the Gay Pride Parade two weeks ago which just happens to be when the Cons decided to review the program.

Coincidence? I think not. In fact, I think we finally have the Cons just where we want them. I think we should use the next two months to plant a seed of doubt in the minds of Canadians.

By asking them who is REALLY running Canada?

And what do Canadians think might happen to the rights of women and gays, and our country's precious values, if these shadowy theocons and their sinister boss ever won a majority?

Golly. I have to say the Gay Pride Parade turned out even BETTER than I expected. 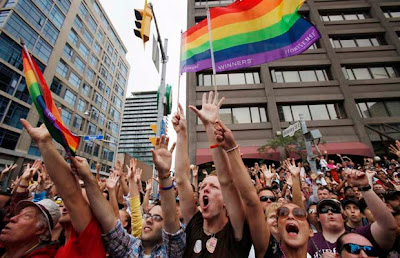 Spare a thought for poor Saint Diane of Peoria...while she figures out how to stay cool.... and what to do with that gun.

Ablonczy is referring questions about herself to the Industry minister's mouthpiece. I guess she hasn't figured out what the gun left on the table in her office represents.

Then prepare to roast these evil bigoted Cons, and drive them from power.

Before they torch our country...

P.S. Congratulations to BigCityLib for breaking the story.
Posted by Simon at 9:19 PM

Simon,
Thanks for helping us out on this one; You seem to love it so much that you took the bait the hook and the sinker.
Cheers,
Your arch enemy.

hi anonymous...oh no not YOU again. I thought you had learned your lesson...
And now you're my arch enemy? And who would that be I wonder...the Joker or the Penguin?
Now go take your medication...you creepy old homophobe...

I've always noticed that Diane Ablonczy always has something to bring to the debate in the commons or in committee. Deborah Grey is like her, also. Notice also that Ms Grey left before Harper came to lead the opposition. Smart woman!

Stephen Harper must feel threatened by such powerful women and keeps them on the sidelines.
Ablonczy is a Minister of State . . . not a cabinet minister.
She doesn't fall into the category of Lisa Raitt or Diane Finley--in other words--trained seals in his circus.

I don't know what's worse; Harper allowing his religious views to interfere with grants and subsidies or Harper's undercutting all people who are independent thinkers.

He seems to reduce cabinet to trained seals who can play O Canada on their horns but that's the only type of cabinet we have seen from him.

Democratic deficit? Now it's greater in the last few years.

I'd love to see the cabinet rise up and defend Diane but that won't happen. The evangelical infiltration of Conservative politics has indeed succeeded.

MS, heck, haven't you read McVety's petition? He doesn't want to stop Gay Pride parades, he wants to stop gay *sex* parades...which are apparently cropping up across the country thanks to federal funding...and I missed them. Did you miss them?

Given that he and his ilk are always on about how 'gay' sex is insidious and dangerous because it's way more better pleasureful than dull, dutiful heterosex, one wonders what frightens him so much. His own biological urges because queer folk are celebrating in the streets while the window dummies are being changed at Kmart?

BTW. I.did.not.know.you.were.TheBatman. Here I thought you were the Mont Reale Ranger. With your loyal sidekick (in your keister) Sebastien.

You talk about window dummies.

They're certainly harmless. It's the dummies in the pulpit and the media that we have to watch out for.

I heard about this and its terrible! People really need to realize the kind of prejudice and ignorance that the Conservative party represents and remove them from power! But I honestly don't know how people couldn't know that already. Example-A guy from my high school tried to get me to support the Conservative Party via Facebook and when I mentioned their being largely homophobic, he got all defensive and said:
"Why do people keep assuming that Conservatives are homophobic?"

Um, because most right wing conservatives are. Hello!?

I sill do not understand what this tempest in a teacup is all about??

Mr. Michael Ignatieff, the new leader of Liberal Party of Canada, wanted to cast himself in the eyes Canadian public as a populist politician and in order to accomplish that task he wanted to march in Gay Pride Parade in downtown Toronto. Ms. Ablonczy decided to accommodate his wish and she made sure that Toronto Gay Pride Parade went as planned. This is not news, this is old style politics; I scratch your back when you need it, and you scratch my back when I need it.

Michael Ignatieff is a grown up man who has ambitions to become next Prime Minister of Canada and Canadian government of the day has an obligation to nurture and prepare him for that job.

If Mr. Michael Ignatieff decides to hang himself while he is waiting to become next Prime Minister of Canada, Canadian government of the day is dully obliged to supply Mr. Ignatieff with as much rope as it takes to get that job done properly.
This is a very serious issue and it cannot be taken lightly.

If Canadian government of the day fails to supply a rope to Mr. Ignatieff while he is the Prime Minister in Waiting and decides to hang himself, and than Mr. Ignatieff becomes a Prime Minister of Canada one day and than one day he decides to jump over the cliff and take us with him the damage inflicted in such scenario is very difficult to predict.

Considering magnitude of a potential national disaster that government of the day was able to avert with this $400,000.00 dollars grant to the Gay Pride Parade in Toronto Ms. Ablonczy should be given the Order of Canada for being one of the most astute, foresightful and responsible politicians in Ottawa.

Please do yourself a favour and read more carefully before you make such assertions.

You're rabbiting on about the wrong person. It's not him; it's about Ablonczy and if you don't understand the importance of a minister of state having her wings clipped publicly and undermined by a so-called prime minister, then maybe you should do something else.

Try gardening for example. The s**t you dish out here can go a long way to feed the vegetables and whatever else you could cultivate.

As Bob and Doug McKenzie would say:

Hi Torontonian...I don't have any time for any of those old reformers, although nowadays they do seem a cut above the present Harper gang. And I did have a soft spot for Deborah Grey and her motorcycle...until I discovered she wasn't a lesbian... :)
But then Harper was once her executive assistant so she know him too well, and got out while the going was good.
I just think the combination of neocon ideology, religious fanaticism, and an authoritarian streak is something we can't afford.
This degradation of our democracy simply has to stop...

Hi Niles.... Gay Sex Parades? I wish. If that was the case I wouldn't have missed the last one... :)
As for McVety what a loser. If you notice how the petition is so closely connected with his fundraising drive, it's obvious he's just using prejudice to raise money. The piggy.
As for my superhero role...I prefer it if Sebastien plays Batman and I play Robin... ;)

Hi Hannah...yes it's sad how the Conservative Party has been dragged into the gutter by Harper and his political thugs. But at least this incident has revealed the prejudice just beneath the surface and can serve as a warning to us all.
Now that we know who they really are it should be easier to fight them, and bring some real Canadian values back to Ottawa...

hi anonymous...You say you don't understand what the fuss is about, but then I don't understand what you're talking about. So I guess that makes us even... :)
Are you seriously suggesting that Ablonczy is a Liberal?
Oh. You are?
Buh bye have a nice evening. And please take the next comment by Torontonian to heart.
Because I agree with him...

Hi Torontonian...thank you for helping anonymous out. And yes maybe he should concentrate on raising vegetables. I'm sure it would be easier than figuring out how politics really works.
And *plop* *plop* wouldn't that be a blessing... :)