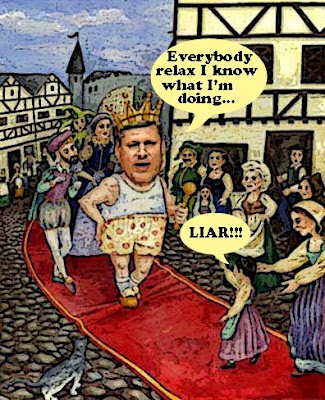 Not just because of his deeply disturbing authoritarian tendencies. Or the fact that despite his bizarre and embarrassing behaviour almost nobody dares tell him that he isn't wearing any pants.

But also because when the going gets tough he retreats into a fantasy world.

After doing his sums, the Prime Minister, who doubles as chief faux economist, forecasts only blue skies, even if they arrive later than first promised. Forget the damage to the manufacturing sector, threatened federal revenues and the staggering debt of its sustaining trading partner, Canada will surge from bust to boom and back to surplus with no structural deficit.

Much to Harper's annoyance, Parliament's independent budget officer Kevin Page, along with real McCoy economist Dale Orr, beg to differ. Infuriating the Prime Minister once again, Page's latest report predicts that come 2014, Ottawa's optimistic turnaround year, the federal government will still be $17 billion in the red. Supporting Page, Orr predicts it will take to 2019-20 to balance the books if Conservatives refuse, as Harper insists, to raise taxes or cut programs.

Realism wasn't central to Conservative strategy in the last election; it's apparently not what they have in mind for the next. Hoping voters will suspend their disbelief a second time, the ruling party is again dangling the prospect of a pain-free future.

And then there's the REALLY crazy part.

When he starts channeling Sarah Palin.

For Palin and her fan club it's about blacks and immigrants who take jobs from “real Americans,” looming socialism, the pinko mainstream media who pillory her, people who speak French and eat unprocessed cheese, and sometimes even the Wall Street geniuses who caused the economic meltdown.

It seems evident that some comparable resentment drives Stephen Harper, but in a very mysterious way. Last week's outburst from Italy against Michael Ignatieff is another good example of the almost uncontrollable partisanship to which Harper's devils drive him.

Why is Harper such a troubled man? Why are those who disagree with him enemies, not opponents? No one has a clue what's eating him deep down.

Gawd. I'm not sure I want to know. But how on earth did this incompetent, angry, Con weirdo ever become Prime Minister?

And how long will it be before Canadians understand that it really is time to check this Great Mad Loser into the insane asylum..... or the Fraser Institute.

Before he ruins our country. Or takes off his underpants.

And embarrasses us even further...

P.S. The latest Angus Reid poll shows that Harper is losing support as the leader best able to manage the economy. If we portray him as a madman who doesn't know what he is doing, I think we can help that process along.

Golly.That should be easy AND fun eh?

Harper resembles Emperor Norton of San Francisco--except for the bit about the Chinese. Norton also endeared himself to the population whereas Harper increasingly isolates himself.

Norton had a legacy

Harper will have none. Can you imagine a high school or sports arena named after Harper?

By the way, is there anything named after Mulroney?

But really, who on earth wants to see Stephen Harper other than fully (if badly) dressed?

Cheers, Montreal Simon, and happy pride where ever we find it, eh?

Yours always, Liz from Van.

By the way, is there anything named after Mulroney?

The *ought* to be a sewage plant or sewage lagoon named after him, the traitorous maggot.

Hi Torontonian...Emperor Norton or Emperor Jones?
But you're right about the legacy. The only thing Harper will be remembered for is killing the old PC party, and turning our Parliament into a toilet.
So I think a fitting tribute to him would be to name a kibo after him... on a hog farm named after Mulroney.... :0

Hi 'berto....sorry we already have a sewage plant named after Dubya, so I think the hog farm idea is better. The one with the Stephen Harper Memorial Kibo, right next to the Schreiber sausage factory... :)

But I guess the out of control Liberals would be doing none of what Harper does? Must say i love the painfully partisan scare tactics, how lefty of you! Problem is, there's nobody worth voting for but Harper in Canada right now. As well, if your little Communist Coalition didn't hold the Newly Elected Goverment hostage and insist on all those stupid stimulus monies we'd be back in the black years ahead! But let's not let the truth get in the way of a good hate speech. At the present moment, thankfully we have Mr. Harper!
P.S. Let's keep this between us, since you'll probably not let this comment through. Seems to be angry Canadians style in the last couple of weeks!!!

hi Jay...well there you go surprised you eh? I am a lefty partisan but I don't censor comments unless they are ugly or bigoted. But guess what? You call the coalition Commies, while I don't call the Cons Nazis. And I criticize my own side, which is more than I have ever seen the Blogging Tories do. So you are definitely more partisan than I am.... :)