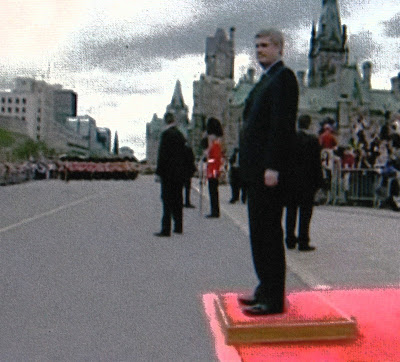 Uh oh. I knew it. I leave the country for a few days and Stephen Harper tries to pull a fast one. When I Ieft he was pretending to be a Liberal...and a nice guy.

Now I see he's pretending to be the Governor General.

Harper managed to get the military to give him a salute that's normally reserved for the Governor-General. As Heritage Minister James Moore explains in the video, this was something that the Prime Minister apparently wanted.

Caramba. Is this Canada or Honduras?

And where was Bruno when we needed him? 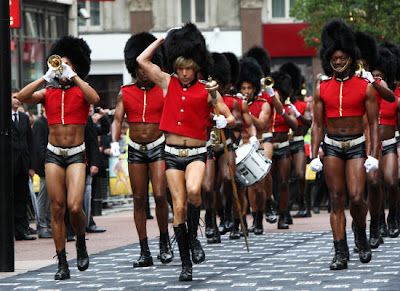 But seriously people..... we have a problem.

Our Parliament is a gong show.

Our government doesn't know what it's doing. The economy is tanking. Our international reputation is shattered.

And now the most sinister and authoritarian Prime Minister in Canadian history is organizing military salutes to HIMSELF?

Golly. Who does Great ,, , Ridiculous Nerd Leader think he is....Napoleon or Stalin? And can you IMAGINE what he would do if he ever got a majority?

Oh wait. We don't have to imagine.

Whenever the election does come, Harper has one plan in mind for afterward: the elimination of public funding to political parties. A punishing blow to his opponents. Sure, the idea caused a showdown last autumn, the adviser said. “But in retrospect, we should have stuck to our guns. It was strategically smart. It’s still strategically smart. We’re going to run again on it. And we’re going to do it, if we win the next election. It’s coming.”

It was a holiday so maybe just cut him a bit of indulgence.
It works the other way too. Just look at Gov. Gen. Vincent Massey and his outfit.

He really wasn't really a military man and I think this get-up gave ideas for NBC about their colour program peacock.

And a happy (belated) Dominion Day to you too.

I'm still voting Tory. Nobody has been able to convince that they're not worth it. Indeed I'm even more sure that the alternatives are worse.

Your stuff is worth reading, even if I really disagree with what you wrote. keep it up.

Benjamin -- You wrote, "I'm still voting Tory." -- What, you're moving to Britain? There ARE no "Tories" left in Canada (except in some provincial parties). Federally, the Tories were wiped out by the Harpokon Reform-Alliance fundamentalist reactionaries. And if you REALLY are "even more sure that the alternatives are worse" than THEM, then you're obviously too far gone for rational discussion.

Hi Oemissions...yes indeed !!! It's too bad we have that English Queen instead of the one from Alice in Wonderland. So she could look up from her game of croquet and shout "Off with his head!!!!" :)

For some reason your link doesn't work for me, but if we're talking about chicken feathers I want Harper to have them. A dozen on his head, and another dozen glued to his behind.

Hi Benjamin...and a Happy Canada to you eh?
Being a Conservative is bad enough but a monarchist as well? That's just too awful... ;)
But I forgive you as I always do. And I'm not trying to convince you not to be a Tory.Just to bring back the old Tory and true Canadian Party and get rid of Stephen Harper.
But thanks for the kind words I appreciate them. Although you realize they do prove me right AGAIN. You're far too nice to be a Harper Conservative... :)

Hi 'berto....now don't be too hard on Benjamin. He may be a Conservative,and as stubborn as a mule, but apart from those glaring faults he's a really decent guy. :)
And I'm still hoping that Tories like him will finally realize that they'd be better off without Harper and fire him before he destroys their party AND our country...

How is out international reputation tanked? I don't think we have any bad reputation besides the one of the worst health care system in the world, but that one is just a huge hoax from the US media.

I think that if the world were paying any attention to us, then our reputation would take a hit, but no one is really looking. Examples like breaking the election law created by the conservatives to have an election before they are too low in the polls to win. They could see their popularity slipping, so they disrespected the rule of law to serve themselves.
Or how about the litany of take it or leave confidence votes? When finally confronted, they shut down parliament to aviod the confidence vote they demanded.
Taxing income trusts, immediately after saying they would never do it... it was an election issue...
When in opposition, his party was only focused on preventing parliament from functioning... they only disrupted, and were not constructive in any way.
Currently, it seems there whole platform is how bad everyone else is. I would not mind to here something positive from a leader, instead of constant put-downs and insults. He and his party are an emarrasment.
Harper is a liar and a thug, but like I say, the world is not looking.

hi Burnaby...yes this little incident may be absurd but it is rather symbolic. The hyper take no prisoners partisanship of the Cons has poisoned our parliamentary democracy. Turned the House of Commons into a pig sty. It's all about destroying your opponents instead of building up the country.
I blame all of this on Harper and that's why I can't wait to see him go...