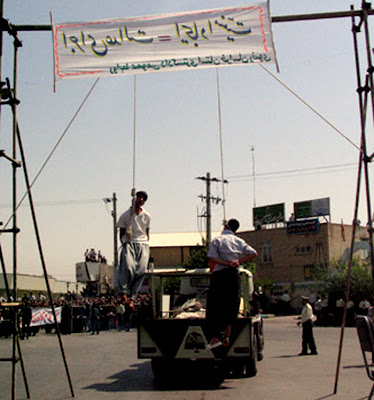 About two weeks ago I wrote a post about how the Iranians were planning to hang another young gay man...for having sex with a friend when both of them were thirteen.

And I asked everyone to write to the Iranian authorities.... like people all over the world were doing. Even though I didn't think it would do any good.

Well I was wrong.

Makvan Mouloodzadeh, a 21 year old an Iranian Kurd, had been sentenced to death in the city of Paveh, following his conviction for an act of sodomy that he committed while still a minor, aged 13, with another minor, also aged 13.

"This is a stunning victory for human rights and a reminder of the power of global protest,"

Of course you can't trust the Iranian religious fanatics as far as you can hork....

Homosexuals deserve to be executed or tortured and possibly both, an Iranian leader told British MPs during a private meeting at a peace conference...

He argued that homosexuality is against human nature and that humans are here to reproduce. Homosexuals do not reproduce.

Or stick a fork in them.

But any good news out of Iran is something to celebrate.

Thanks to those who helped put pressure on the Mullah regime.

As the old Jewish sage said....save a life.

From that part of the world, any good news is great news. They're still bastards, but maybe there's hope...

There's no hope yet, I hate to blow an idea but, guys are still dying because they were raped and thrown away to prove the power of being straight.

I don't talk about it much, but my brothers die in unspeakable ways while I sing the praises of my freedom in Canada. It really pisses me off.

I guess as the time goes on,many more will understand what they have done is really unforgivable.

Hi JJ! Yeah it is good news...but I'm going to have to read some Iranian blogs to try to figure out what it means.But one thing is for sure...they're still bastards. :)

Hi Bruce!! I'm afraid I have to agree with you.Maybe the Mullahs decided that hanging someone for what they did at thirteen would be one hanging too many.
And not good for their campaign to try to make us believe they're not planning to build nuclear weapons.
I dream of the days when the Mullahs topple...but I'm not holding my breath :)

Hi Ur Merit!! Yes that's for sure. History is on our side.But we must never stop fighting until the last gay person is free.One day the homophobes will be scorned and reviled.And we will be celebrated for having helped bring them down...Sounds good to me!!! :)

heres the thing, these kids were 13, they may not have even been homosexuals ... ive heard of plenty of really weird stuff going on in boyscouts, and nowadays you wouldnt ever think those people were gay, some girls go through phases when they are making out (possibly doing more with other girls), i bet you guys whether muslim or not wouldnt be turned off with 2 chicks making out, regardless, lets say they both turned out to be gay, do you think they deserve a brutal execution? ... they might as well have ran a boiler room or ponzi scheme, or maybe even murdered people, where i come from god is good, all the time, and all the time, god is good, would he approve of these brutal executions to frightened young men? thank the lord the leader of this nation had the sense to stop this, makes me think he actually is a normal living person.