The Bad Sex in Fiction Awards 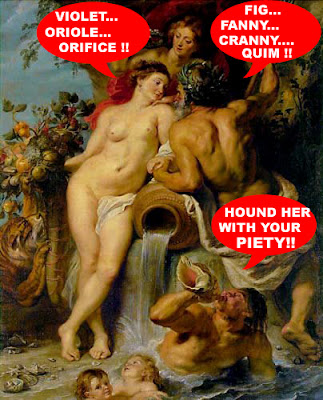 When you see an author being humiliated for writing about sex like this:

You know it's time for the Bad Sex in Fiction Awards. My faves!!!

And how DELIGHTED I was to see the late Norman Mailer take home the piggy biggy...for this priceless shite:

Uncle was now as soft as a coil of excrement. She sucked on him nonetheless with an avidity that could come only from the Evil One - that she knew...The Hound began to come to life. Right in her mouth. It surprised her. Alois had been so limp. But now he was a man again! His mouth lathered with her sap, he turned around and embraced her face with all the passion of his own lips and face, ready at last to grind into her with the Hound, drive it into her piety.

He so richly DESERVED it. For everything the sexist lout ever wrote. Although after looking at this year's short list....

O glorious pubes! The ultimate triangle, whose angles delve to hell but point to paradise.Let me sing the black banner, the blackbird's wing, the chink, the cleft, the keyhole in the door. The fig, the fanny, the cranny, the quim - I'd come close to it now, this sudden blush, this ancient avenue, the end of all odysseys and epic aim of life, pulling at my prick now, pulling like a lodestone.

For daring to suggest that the glorious bard would ever write poop like that.

And that if there was any justice... Gary Shteyngart should have SHARED the prize with Mailer:

Her vagina was all that, as they say in the urban media - a powerful ethnic muscle scented by bitter melon, the breezes of the local sea, and the sweaty needs of a tiny nation trying to breed itself into a future. Was it especially hairy? Good Lord, yes it was.Mountains of kinkiness black as the night above the Serengeti with paprika shoots at the edges - the pubic hair alone must have clocked in at half a kilo.

"Yeah, do me," she kept saying, after issuing a few grunts so male and assertive they startled me into a brief homosexual fear, a fear compounded by one of her sharp nails digging into my tight rectum. "Do me, daddy," she said....

You know...... the more I read that hairy prose....the more I believe that if Mailer didn't have the "coil of excrement" ....Gary woulda WON. Isn't life shitty?

But then could ANYTHING this year beat some of last year's entries like this ode to culinary sex from David Mitchell?

If Dawn Madden's breasts were a pair of Danishes, Debby Crombie's got two Space Hoppers...Tom Yew got on her and sort of jiggled there and she gasped like he was giving her a Chinese burn and wrapped her legs round him, froggily.....
Now her grubby soles met like they were praying. Now his skin was glazed in roast pork sweat. Now she made a noise like a tortured Moomintroll.

Or how about this lyrical orgasm by Julia Glass?

And then before her inner eye, a tide of words leaped high and free, a chaotic joy like frothing rapids: truncate, adjudicate, fornicate, frivolous, rivulet, violet, oriole, orifice, conifer, aquifer, allegiance, alacrity ... all the words this time not a crowding but a heavenly chain, an ostrich fan, a vision as much as an orgasm, a release of something deep in the core of her altered brain, words she thought she'd lost for good.

Sex. A bird that can sing Mozart? Not.

But isn't it GREAT to see decent authors making asses out of themselves? I can hardly wait until next year!!!

In the meantime my advice to anyone thinking of writing about sex is just DO it instead.

Speaking of authors....a great Canadian one has died.

Her contribution to gay culture and gay liberation in Canada will never be forgotten. Before everyone else arrived she was there...the lesbian they couldn't ignore.