Finland and the School Killer

In a quiet snowy forest a teenager plays with some apples....

And then goes on to kill nine people including himself.

Then because this NEVER happens in Finland everyone wants to know WHY?

Was it because he was bullied?

Or was it the weather?

At this time of year it is sunk in almost permanent half-light and Finnish families count the days to their winter holidays when they can flee to the bright sunlight of south-east Asian resorts.

Clinical depression is high, the suicide rate too. But above all the Nordic winter isolates the young in the small towns: they arrive at school in the dark and leave it in the dark, travelling long distances to their homes. Friendship in the traditional sense is often a summer luxury.

And so friendship becomes virtual......in Finland the high-tech world has become a normal, rather than an exceptional, substitute for the world of human contact. A youth isolated at school sinks even deeper into isolation when he has left the school gates: a recipe for trouble....

As for the killer... 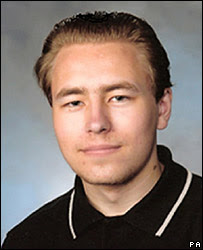 Here's what he had to say...six months before he opened fire....


Sad. But so familiar. I've heard it all before. In the court of Eric Harris...the Columbine Killer.

And unless more is done to deal with those problems.

Are we talking about Finland or Canada?

RE: Here's what he had to say...six months before he opened fire....

Articulate, lonely, frightened, intelligent, angry, sad - from reading his words, born Pekka-Eric Auvinen, (died "The School Killer") seems to be all of those BUT evil, he was not - he tried, and failed (or rather the world failed Pekka-Eric).

The walking wounded, some never recover from the assault of cruelty/bullying and …. the rest of the world …. will continue in denial.

Simon - Bullying, teenage anger, and guns make a really deadly mix. - I add that guns and many things make a deadly mix..

Hi anonymous...yes I KNOW what you mean...but if it's even worse than here the situation must be DESPERATE...

Hi Sassy! yeah he was bullied and judging from that tape I wouldn't be surprised if he was gay.And then there's the anger directed at EVERYONE. As for the denial...the Finnish government which leads the charge against the EU gun controls was of course denying that the availability of guns had anything to do with it.