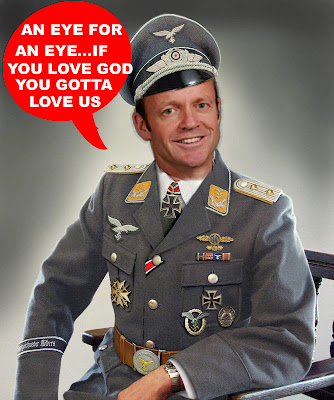 It wasn't easy deciding who really deserved my Best Halloween Horror Costume Award this year. But in the end I decided to award it to the religious wackjob and sinister so-called Minister of Public Insecurity Stockwell Day.

Not just because the idiot homophobe wears his costume so well. But also because he really knows how to play the part.

"We will not actively pursue bringing back to Canada murderers who have been tried in a democratic country that supports the rule of law," Day told the House of Commons on Thursday.

"It would send a wrong message. We want to preserve public safety here in Canada."

Huh? Wot? Just because Day is dum enough to believe that Jesus rode on a dinosaur instead of a donkey.....or that Barney was real and the Flintstones was a documentary.... doesn't mean the rest of us are IDIOTS.

This outrageous betrayal of another of our noble Canadian values, is obviously just ANOTHER attempt to polish the asses of the Bush Cheney administration....with their traitor tongues.

But also the latest move in their secret campaign to send out a message to their religious wingnut base. Help us get a majority.... and religion will be back with a vengeance.

And so will the death penalty.

Which also explains why they fired this Tory candidate.

Conservative officials have been actively resisting Warner's emphasis on housing, health care and cities issues, he said, even blocking him from participating in a Star forum on poverty earlier this year and pointedly removing from his campaign literature a reference to the 2006 international conference on AIDS in Toronto – which Warner attended but Prime Minister Stephen Harper did not.

To send out a message that religious homophobes and their deranged ravings will also be back...if the creepy Stephen Harper gets the majority he craves. So he can change Canada beyond recognition.

The good news is that these anti-Canadian yankee licking Cons are so desperate to get the wingnut base on side before an election.... their masks are starting to slip. So if you look really carefully you can see Stephen Harper's hidden agenda slithering like a viper behind the curtain.

And the long shadow of the hidden cross... 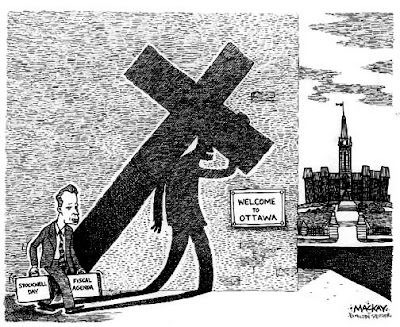 The next election won't just be the most important election in Canadian history. It will be a battle for the very soul of Canada...with the religious monsters who would DESTROY it.

As I've said so many times before...if you love this country.

P.S. On the bright side....the religious freak of nature Ann Coulter gets her song...

Just because these Cons are crazy and evil.

Stephen Harpers new Canada needs a new name. I suggest Narnia. Read the Witch the Lion and Wardrobe. Its a quick read. Note Aslan the strong leader figure never tells the kids what is right or wrong. Harper is pretending to be Aslan in Canada. This is a book by the great Christian writer CS Lewis on of Harpers favorite people. Lewis wrote that being born of God we have morality. Morality is proof of God (not of evolution). The bad people therefore know when they do wrong and therefore must be punished. That includes death for the Canadian who murdered in America. Canada needs a new Flag. I suggest two blue bars on each side with a face of Aslan/Stephen Harper replacing that corrupt liberal thinking icon Canada's red maple leaf. The challenge for the flag is to have the eyes of Aslan/Stephen Harper to follow you so you know they are watching you, waiting for you to do wrong so you can be punished. If was a good organizer I would get people to raise funds for a prize for the best team of 5 people to come up with a flag that represents Narnia the new Canada. Predators fear teams of 5 people, its is the reason must predators are extinct. Stephen Harper is a predator just like a lion, he may not eat children but he intends to replace the nice place we call Canada with a place as nasty as he is.

it's so easy to hurl the words evil, demons, devils and what not about the cons....because they are. they may not be aware of it, i don't think they are, they think they have been sent by gawd.

this latest bit, about not fetching back the canadian murderer facing death row.....what a sliimey lead in to persuiing the death sentence.

may the voters think beyond their gst cut!

Do you think Stephen Harper and his followers will stop at the resurrection of the death penalty? If so, you're sadly mistaken.

This abandonment of Canadians abroad is just the beginning of what Harper has in store for Canadians at home.

Stockwell Day is one of the most dangerous of creatures on the planet: a lizard with a blood-lust of Biblical proportions, and just the right smattering of "righteousness" to be believable by lower life forms such as those who vote for him and attend his sermons or heed sermons by those like himself.

Be afraid. Be wary. Be brave. Toast that lizard by raising a blazing fire of human rights-ousness that he nor his ilk have ever seen. Make it look like their own personal Armageddon and make it one they will never forget.

Make this lizard wish he HAD been left behind in the dinosaur age, by Jesus.

"Stephen Harper is a predator just like a lion, he may not eat children but he intends to replace the nice place we call Canada with a place as nasty as he is."

You can't say it better than that. I just hope that more Canadians will see Harper as he really is...and that our beautiful Canadian values are worth saving...Mostly I'm optimistic But sometimes I'm not.Ugh.

Hi Scout!! Thanks. I must admit that one was pretty good compared to my usual standards. Although you know I like to think of them as the Grandma Moses of Photoshop art! Er....NOT. :(
As for this death penalty stuff...if Canadians don't revolt against that...they never will.
Although I can't wait for an election campaign where we can say if you want the noose...vote for Harper. The last time I checked Canadians were five to one against it!! Heh heh heh...you don't think the crazy neocon might hang HIMSELF??? Excellent....

Hi anonymous!! Don't worry I believe these crazy Cons like Harper, Day and some of the other good ol boys are capable of ANYTHING.
I wouldn't bother to blog about politics if I didn't honestly believe that these Harper Cons are the greatest internal threat Canada has ever faced.
But of course I'm not the slightest bit afraid of them...I know our side is going to win because we're better than them.
But you're right we have to be SMART as well as brave. And I would add a little ruthless too. You know be even worse them for a while, until they are defeated....and we can all be better... :)