The RCMP and the Killing of Robert Dziekanski 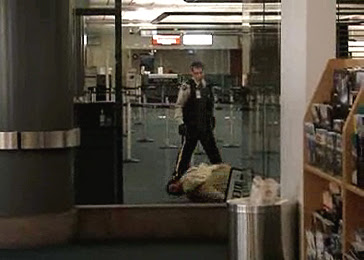 I don't know what exactly happened in that Vancouver airport lounge, but from what I've read, and from what I saw .... and heard.....on that ghastly video, it looked to me like legalized murder.

The dying screams of Robert Dziekanski will be heard around the world. Many people will be shocked to see such well known symbols of Canada acting like brutal thugs.

But we should know better. We should know that the reputation of the once revered force has been going south for a long long time..

From the days when they hunted homosexuals with their so-called fruit machine.

Or looked for communists at the CBC.

To more modern times and other scandals.

And let's not forget how they completely bungled the Air India investigation. The biggest mass murder in Canadian history.

Or their disgraceful role in the deportation and torture of Maher Arar.

Or the sleazy way the high command handled the pension fund.

Or the way they all but elected Stephen Harper and his Conservatives by publicizing a dubious complaint against the Liberals in the middle of an election campaign.

The cold hard facts are that the RCMP is a ridiculously old fashioned force with anachronistic military style training, a corrupt and cliqueish command structure, and an antiquated mentality that needs to be completely overhauled and brought into the modern age.

It's not a question of rotten apples....the whole tree is twisted and sagging of old age. The problem is systemic. And many ordinary officers are also victimized by it.

And I'm not saying that there aren't many good and dedicated ones trying to do their best. Because I know there are.

But as for the RCMP as a whole...surely what happened in that airport lounge to a poor, hungry, tired and confused man like Robert Dziekanski ...whose only crime it appears was that he couldn't speak English and was feeling lost and desperate....has to be the last straw.

Because if the Mounties are going to be a national symbol, not just here but all over the world, we better make damn sure that the force can live up to our Canadian standards and values.

If we want to be proud of them.

Instead of ashamed of them as I am now..

P.S. Dr Dawg and Chet Scoville, Unrepentant Old Hippie and Bruce at Canuck Attitude have more on the story.

So does the Western Standard. And so does Aaron Unruh.

Isn't it nice to see people put aside their differences ....if only for a day.... in these hyperpartisan times?

And faced with a shocking act of violence.

And the Western Standard, too. Who'd a thunk it?

Check out the cop using what appears to be a baton repeatedly smashing it into Dziekanski's head at 5:36 segment two of the video at the Van Sun:

I think this is one issue where there'll be surprising alliances.

I was pleasantly surprised by that excellent post at the Politic -- very libertarian. No libertarian (right or left) could stand for state goons going around beating on people.

oh stop the crocodile tears and over-reaction, legalised murder, give me a break.

Hi dr Dawg! I was very pleased to see that criticism crossed party lines if only for a day.It really was disgusting and the tape is going to disgrace us all over the world.
Although I suppose I shouldn't be surprised. The indefensible is the indefensible...

Hi JJ!! Yes I must say Aaron surprised me.Now we have at least three square feet of common ground!!! :)

Hi anonymous...thanks for the link.
It's good to see so many Canadians care about that poor guy who was so excited to be coming to Canada ... but never made it out of the airport...

Hi Steve...maybe I should have called it legalized manslaughter. I know they didn't intend to kill him...but their casual brutality was sickening.
Talk about over-reaction. How can anyone defend that?
What kind of society do you want to live in?
The last time I checked this was still Canada.
And ...no crocodile tears...but that wasn't....

I wrote you in July about your Spartacus post. Good to see you are hanging in like only you can ;)

Your post on the killing of Robert Dziekanski is why I am writing you today. Weird isn't it, that even sworn enemies have come together on the issue of this death. Good for you making a bridge like only you can.

This killing is awful. It has hurt my heart and soul to see it happen in Canada, or anywhere else for that matter, but it actually happened in Canada. In Vancouver. One of the more forward-thinking of Canadian cities. (Besides Montreal of course.)

Only one good thing about my brother's death is that he never had to see it, nor bear the awful truth that this debacle occurred in a city he loved beyond anywhere on the planet, and he'd been around this world and would tell anyone he met that Vancouver was the best place on earth. In fact, I think the 5-ring circus and the BC govt stole that saying from him! He wouldn't have believed it could happen here. I am happy he was spared that knowledge.

Thanks for keeping this issue in people's minds like only you can. You are a warrior. My brother would have liked to have met you. You seem to be kindred souls. He was a loving person and a fearless foe when necessary. Scot, eh.

If ever you're out this way many of us too would be honoured to meet you.

All the way from Quebec, Montreal Simon stands up for Canada, Canadians and our visitors!

A Straight Lover of Lovers of all Kinds