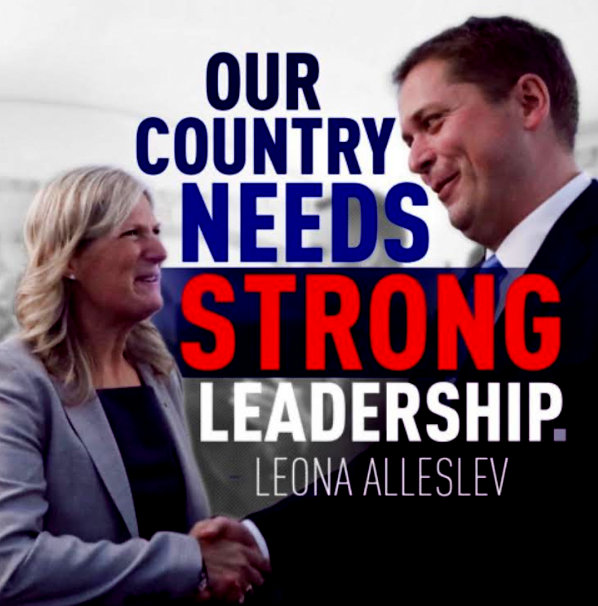 I have no idea why Andrew Scheer made the Liberal defector Leona Alleslev the deputy leader of his demoralized Cons.

But if I look at the poster the Con propaganda department made to celebrate her defection just over a year ago, it's clear she is easily impressed. And not too bright.

For anyone who believes that the increasingly desperate Scheer is a strong leader must either be REALLY dumb, or living in a parallel universe, or simply out of their minds.

And sure enough, when Alleslev was asked some simple questions about climate change and carbon taxes, she looked like an absolute Con clown.


Asked where she stands on carbon pricing — something she supported as a Liberal — @LeonaAlleslev said, “the carbon tax is punishing our economy.” #cdnpoli pic.twitter.com/MTCR7xFRLS
— Power & Politics (@PnPCBC) November 28, 2019


For that was not just bad, it was painfully bad. And of course totally wrong.

If Chris Ragan’s math is right, Alberta and Ontario should be thanking Prime Minister Justin Trudeau for imposing a carbon tax on their residents.

Without naming names, the commission shows over and over again how an escalating carbon price accompanied by rebates — the Trudeau way — is the most transparent and the least costly for the economy and taxpayers.

Carbon taxes are the easiest and best way to fight climate change, and encourage the greening of the economy. And the rebates that the Cons always forget to mention, can help stimulate the economy not punish it.

But as if that wasn't embarrassing enough, the hapless Alleslev then went on CBC radio and made an absolute fool out of herself. Again.

By trying to defend Scheer's refusal to march in a Pride Parade... 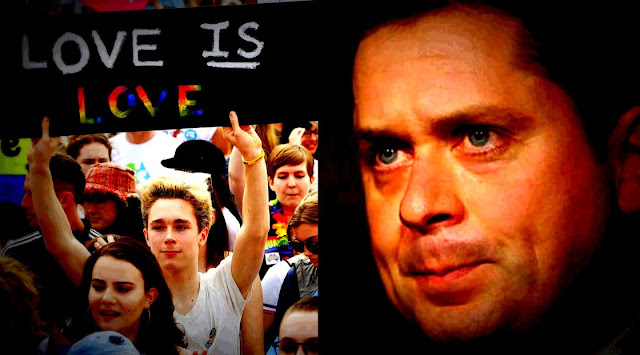 And landing flat on her face.

"I think that that's obviously his choice and we live in a country where that's his choice," Alleslev told host Chris Hall. "Have we asked anybody if they marched in a St. Patrick's Day parade?"

Which needless to say caused quite a reaction on Twitter, on all sides of the political spectrum.

One of the ugliest and most offensive things I've heard in a long time.

This made me very angry. It's also the road to electoral oblivion, but that matters less than the awfulness of the statement itself.
— Rachel Curran (@reicurran) November 30, 2019

150 years ago, it would be fitting to ask a Conservative leader why he refused to march in a St. Patrick's Day parade.
in 2019 Andrew Scheer needs to say why he refuses to celebrate Pride. @LeonaAlleslev better hope her party doesn't take 150 years to figure this no-brainer out. https://t.co/H1xjLpBVAq
— Charlie Angus NDP (@CharlieAngusNDP) November 30, 2019

Where even her apology bombed.

‘Pride parades represent a wonderful celebration of the LGBTQ community and are an important symbol in the fight for LGBTQ rights.’

this is not what Andrew Scheer believes. At all. Quite the opposite.

So good for you for apologizing but...


And after reading this.

I can only imagine how Michelle Rempel must be feeling...

And I'm thinking this is going to end badly, with the Cons tearing themselves to pieces.

You know, I thought I was going to miss the Con clown Lisa Raitt... 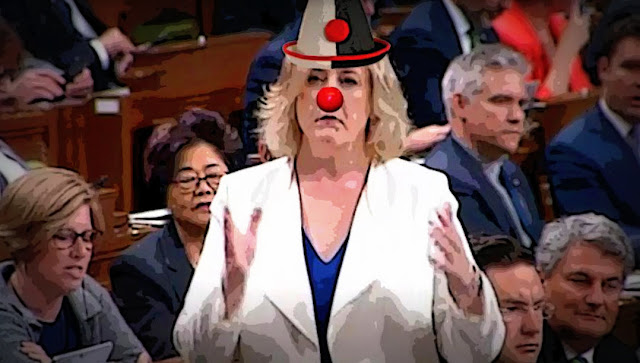 But now I think Leona Allesev could be even more hilarious... 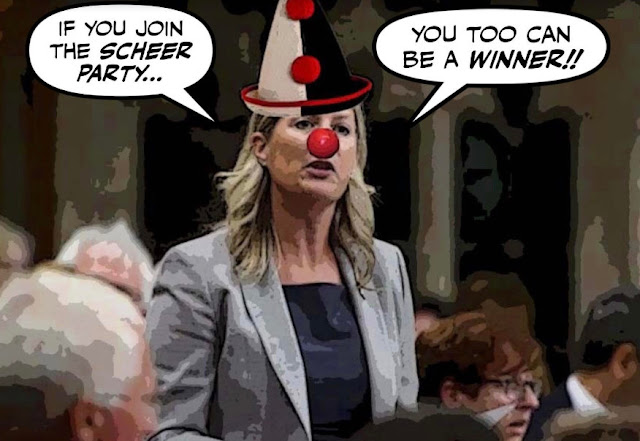 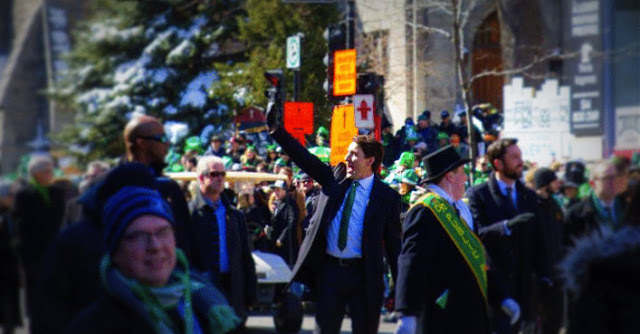 Unlike the loser Scheer, he's a Prime Minister for ALL Canadians.

Give the man another majority...
Posted by Simon at 1:27 PM

Alleslev is the ultimate political opportunist even more so than Scheer. She road the coattails of the LPC/Trudeau in 2015 to get elected as an MP and she defected to the CPC because she saw them and the best vehicle to get reelected. She squeaked through in 2019 and had she made this statement during the campaign she would not have been re-elected. The voters of Halton grew weary of Raitt's antics so hopefully the voters of Aurora see fit to kick her ass to the curb the next go round. What a thoroughly asinine analogy to make.

I don't want to be cruel, but Alleslev even looks dumb. That interview was almost too embarrassing to watch, and the way she looks at Scheer is even worse. I reminds me of the way a dog looks at its master. The Conservatives have really hit rock bottom.

Fun to watch on QP bad guy tenckeye beat up on weak andy with his stupid con logic. Can someone please do an audit of the silverware at Stornoway.

To be honest I find it hard to be outraged or disgusted by her comment about St. Patrick's Day. A decade ago, sure, I would have been bothered by the trivialization.

Today it's the sort of attempted quip so dated I'd expect to find it in the jokes section of a museum of paleontology.

I fully encourage all Conservatives to vent their spleen and speak freely on all subjects over the coming months. We support diversity of opinion here and want to know all of yours, belched and grunted as loudly and publicly as possibly.

Fox News Aryan bimbo is the CPC "type". Maybe she has a crush on weak Andy the soda jerk and wants to share some chocolate milkshakes at the local five and dime. 🤢 🤮

This Log Cabin Tory bullshit is kabuki theater anyway. No one with two brain cells to put together really believes that Cons give a dog's tail about LGBTQ+ people. If Scheer had won we wouldn't even be having this discussion. They're just trying to come up with an easy answer for why they lost instead of doing some serious self-examination for ALL the reasons why they're abjectly horrible. Every single one of them. Including this idiotic turncoat who the Liberals are better off without.

Besides, all these "never Scheer," never-Trumper types are Harperites first and foremost just like Scheer himself, including the vaunted Rona Ambrose whose homophobia towards Trudeau has apparently been shoved down the memory hole. If LGBTQ+ acceptance is so important to the CPC, why doesn't anyone ask them why Dear Leader didn't march at Pride for 10 years? Trudeau has made it very clear how proud he is to be the first sitting PM to do so. Meanwhile, the Cons have been eviscerating him as effeminate for as long as he's been in politics. So why the sudden change in attitude, eh, Rachel? Why didn't Steve boot Andy from caucus when he made his obnoxious speech on the floor of the HoC? Or make a principled stand when he had the chance, and show up to the parade arm-in-arm with Ray?

Sure Trudeau walks in the annual Pride and St Paddy's marches. But would he join his fellow Catholic Andrew Scheer in the annual March for Life? Checkmate, libs.

I hope this is sarcasm. Hard to tell on the internet. But Trudeau would never show up to a misogyny march. Scheer might attend with some of the yellow pests he gave enthusiastic support to. Maybe even join in a Kenney Klan Karaoke session singing the official anthem of Gilead. Under his eye, in all our sons' command!

Aww, look at you thinking you're so clever now.
Yeah, let's celebrate religious bigotry! Let's celebrate the state deciding what women are to do with their womb! Let's celebrate a raped woman being forced to keep her baby or God will be mad!
Yeah, totally the same thing.

Maybe we should have some sympathy for that sick woman. It is clear that as soon as she joined the CPC she caught the disease. A severe form of cerebral CONStipation borne in the western hemisphere and that quickly spreads. Verbal vomitimg, significant losses in thougt process and paranoia are the main symptoms. Also known under its clinical name 'Harpes'. The effects on the host are very devastating and it's almost impossible to cure. That poor woman is doomed.

Another example of false equivalency. Pride is a march for acceptance and equality. March for life is to force anti abortion values onto others. Suspect that if march for life became a march to honor and protect mothers from discrimination and conjugal violence Trudeau would be there.

Hi anon....I agree, Alleslev is a craven political opportunist. For some inexplicable reason she seems to have a high opinion of herself, and since the Liberals didn't recognize that "greatness" she defected to the Cons. She still hasn't shown any talent, and I predict that Scheer will rue the day he chose her as deputy leader...

Hi anon....I agree with you. Not only does Alleslev sound dumb she looks it as well. And yes the picture of her staring up at Scheer does remind me of a dog and its master. But then that's one of the reasons Scheer chose her, if Lisa Raitt had survived his humiliation she would have been a mortal threat to him as deputy leader. But nobody will ever think of Alleslev as Con leader...

Hi Steve...I too am enjoying all those heavy Con hitters ganging up on weak Andy. They know that as long as that loser leads the party they won't be going anywhere....

Hi Sixth Estate....I feel the same way. Alleslev is not a homophobe, just incredibly dumb. But she will reflect badly on Scheer, and every time she sticks her foot in her mouth it will only underline Scheer's lack of judgement. I understand he wants to show that the Cons can be a home for "disappointed Liberals" but I'm afraid he's the one who is going to be disappointed...

Hi Jackie....it's true that the Cons have never been fiends of the LGBT community, even though Harper's office was full of gay closet queens. But times change, and what was OK back then is not OK now. So the gay issue is one that serves to show that the Cons are out of touch, and definitely too reactionary to attract the support of most young Canadians.

Hi anon@8:36PM....Why would Trudeau, or any modern leader, join a so-called "March for Life." A woman must have the right to control her own her body, and my position is if you don't want an abortion don't have one. There is nothing Biblical about the anti-choice movement, it's just an attempt to make women second class citizens. So checkmate that one Con....

Did you deliberately say "fiends"? We actually do have an important Irish related issue here in Mtl now, as what seem to be a great many human remains from famine refugees who wound up dying in fever sheds here have been discovered while building the REM, under the Black Rock commemorating them. The question is whether there will be an adequate commemorative site.

Yes, fortunately the Orange Order parades are a distant and dismal memory now. Perhaps one day so will be homophobia and fake "pro-life" marches that are all about controlling women's bodies and not at all concerned with caring about children once they are born.

Anti abortionists want to make fetuses legal persons, and presumably a suitable lawyer for the fetus can assert its rights despite being entirely enclosed inside another person who apparently must accept the government in the wombs of the nation. At the same time the anti gays want to make gay people not legal persons so they can be killed with impunity.