In one of my last posts I wrote about Andrew Scheer's bizarre performance after emerging from a bruising seven-hour caucus meeting.

And how he tried to convince us that his Cons were united, and that he was really a winner not a loser.

Which didn't really surprise me. They don't call him a serial liar for nothing eh?

But what did surprise me, was the way the Con media is going after him. 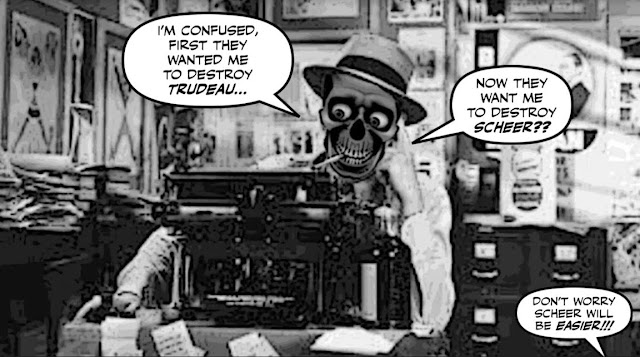 After fluffing and blowing him forever, and doing their best to elect him prime minister, our hapless hacks seem to have finally realized that Scheer is a religious fanatic.

Who can't even answer a simple question like this one:

Q - "Do you believe that being gay is a sin?"
Scheer – “My personal opinion is that I respect the rights of every single Canadian” #cdnpoli https://t.co/84zLLKzjvj pic.twitter.com/js8Ghk2KnQ
— Mackenzie Gray (@Gray_Mackenzie) November 7, 2019


Or as even the faithful fluffer David Akin points out, can only answer a question that was not asked.

Scheer fell back on a variation of the same answer he gives whenever he is asked about Pride parades, same-sex marriage, etc. This was his “gay answer.”

While John Ivison suggests that Scheer is living on borrowed time.

Scheer has been like a puppy chasing its tail. His talking-points-heavy campaign offered little worth voting for and then he wondered why people didn’t elect him prime minister. The lack of ambition shrank the party’s appeal to its base and he failed to make an emotional connection with people where he needed to, particularly in the country’s largest cities.

The sense of those emerging from Wednesday’s meeting is that caucus has put Scheer on notice that he has six months to figure out how to win in central Canada or the membership will sort it out for him.

And so do many others in the Con media, who are now asking the questions they should have asked long ago.

Which to me can only mean their porky bosses now want Scheer to be toppled as soon as possible... 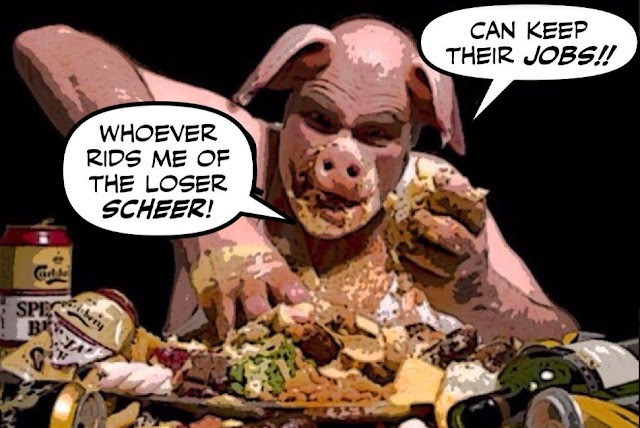 So the Cons can get a better candidate to go after Justin Trudeau.

Which suggests that things are going to get REALLY ugly for Scheer, and explains why he's looking and sounding so desperate.

This is hilarious. The "man of the people" glides around in his chauffeur driven limo, claiming only his Cons can unite us when nobody has done more to divide us. And he wouldn't know what ethics are if they jumped up and bit him. Is Scheer desperate or what? https://t.co/WpajvdK227
— 🇨🇦 Simon 🏴󠁧󠁢󠁳󠁣󠁴󠁿 🌈🏂 (@montrealsimon) November 8, 2019


As for me, I can't decide whether I want Scheer to go, or stay, so he can be used as a piñata by all the Cons who want to destroy the Ugly American... 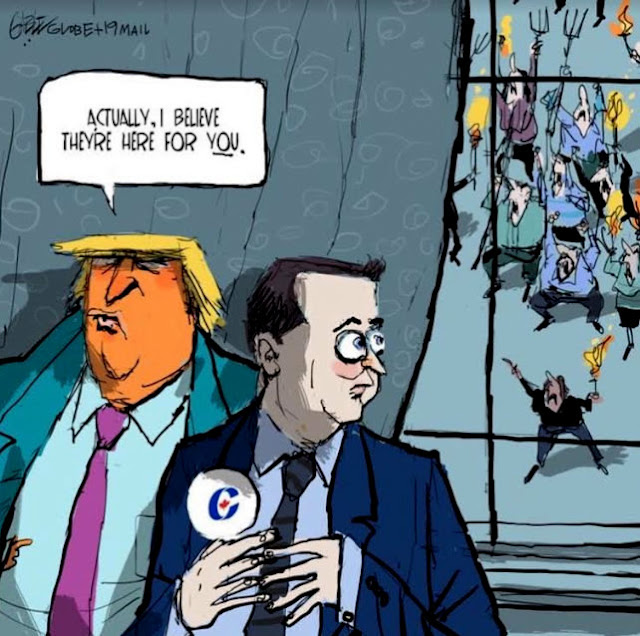 But one thing is for sure, when he does go down, and he will. 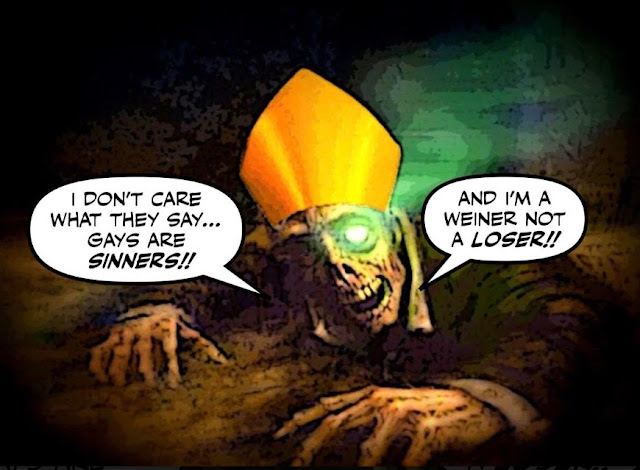 I dunno, I'm worried, Simon. What if they do get a better liar and fluff that guy up, or pump the Dippers' tires some more to split the vote? Or the Greens again, now that their incoherent interim leader is again trying to court JWR to replace Dizzy Lizzy? I'm hoping the Liberals can again make a connection between provincial and federal Cons by pointing out Jason's house of horrors and the hellscape that Ontario will look like after 4 years of Dystopian Doug. Or reminding everyone that it was MacKay who sold out to the devil in the first place. The Cons have gone off the rails and become radicalized with Trudeau Derangement Syndrome just like the Republicans in 2012 when they were so sure they could beat Obama, and then look what happened...

I wouldn't worry Jackie. The reformatories had a beauty contest last time , got rid of anybody with any ability early and it came down to Sheer vs. Mad Max. Oh boy ! They'll have another convention next fall or winter and someone crazier will win.

Its been interesting to watch Post media and their backers float up various opinion pieces to see which one can best manipulate and inspire the 905 crowd to deliver a Con majority in the next election. Suspect that the reformers are just too entrenched to root out without annihilating the party so their choices boil down to selecting a much better liar or Scheer has a fake epiphany, dumps Hamish and employs a life coach to navigate the troubled waters. Its amazing how the thought of loosing all of the perks and future monetary opportunities can sharpen the mind. The man is a puppet, Hamish pushed his messaging in one direction but overlooked the perceptive importance of Scheers personal qualities, a good coach can attune both to attract more of the 905 crowd while keeping enough of the zombie base on social media life support. Either way the result is a new veneer but the same old reformer rot underneath, hopefully Trudeau and the Liberals will prove an elusive target and continue to just keep getting wiser and better with age.

Simon, will we see an article on Jason Kenney, Preston Manning and Wanksit? The first two are downright Machiavellian and sinister, but the rubes are so desperate and deranged it's pathetic. "Foreign-funded environmentalists" (with bonus anti-semitism against Soros and the Rockefellers), bashing B.C. and Quebec (while including BCers in their calculations despite their stated desire to have no part of this, and outright copying the Quebec separatists), racism against First Nations modeled on Afrikaner militia rhetoric about land expropriation, and some of them even think Greta Thunberg is Justin Trudeau's out-of-wedlock daughter with the nonexistent mystery student from West Point Grey Academy! That she was given up for adoption and went to the Montreal climate march to seek out her biological father! I guess that makes Fidel Castro her granddad? 😂

That's just the usual glue-sniffing conspiracy theory talk, but the really scary part is that the organizers, Peter Downing and Pat King, are white supremacists with a criminal record. Yellow Vests Canada and Anti-Racist Canada have reported on this, but the useless media keeps legitimizing this massive troll operation with their usual one-sided coverage. I think you should let the Wexit wankers know that while it's obvious they've never cracked a book in their life, they could start by reading a history book. Because it's not like prime ministers named Trudeau have a reputation for backing down to violent separatists. "Just watch him"...

Scheer's got 5 months to prove he's worthy of going up against JT, regurgitated as Harper 3.0. My my, look what the cat coughed up. I am impressed with his "4 key priorities" in that he could write comedy or fictional writing(eg. his resume) once he's been exorcized from his position. Laser focused says he that he will be. Hahaha, that's funny. There will be focused lasers alright, right on Andy's pasty white ass as the whisperers plot his ultimate demise.
This will no doubt be Scheer's winter of discontent as the sword of Damocles dangles over his head. Then one day it will drop, followed by the moving trucks hauling away his excessive "luggage" from Stornoway. Bitter and defeated, he will once again feel the ultimate embarassment of losing because of Justin Trudeau. This election is turning out to be a gift that just keeps on giving.
JD

They look at religious fanatics as an asset and, just like their precious B&R boys, one of the single-issue segments on which their coalition was built. They don't have any problem with any of them until they realize that they may have cost them votes.

the cons are caught in a trap, they cant walk back
cause they love a rolex wearing jesus
the roots of the party are all pious
and they cant stand the thought
of a gay baby

The Dishonorable MP for Calgary Nose Pick might be first in line for Alt-Right Andy's job. Giddy up! *hic*

Interesting observation, single issue voter groups are just another resource to be exploited and dumped/Trumped when they cost votes rather than increase them. They managed to convert "tarry oil" into "ethical oil" so it remains to be seen if the cost-benefits analysis shows they should do the same with the leader of the religious fanatics or dump him.