Andrew Scheer And The Return Of Stephen Harper 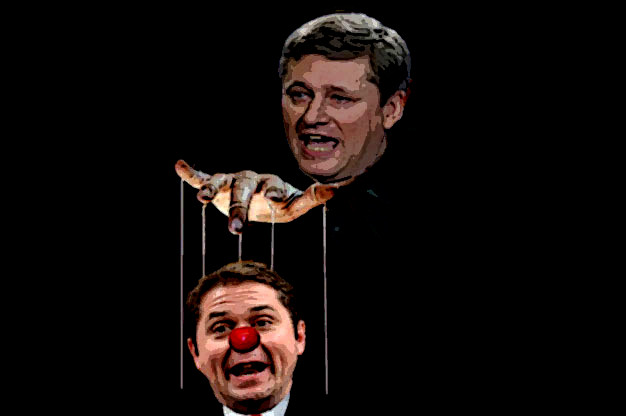 We always knew that Stephen Harper never really went away. And that he was still lurking in the shadows whispering into Andrew Scheer's ears. And pulling his strings.

The two men were always were very careful to keep their close relationship under wraps.

But now Scheer is desperate, he's been slipping in the polls.

So now Harper is coming out of shadowy closet.

Some say that Scheer needed to reassure his base that Harper is still in his corner, to restrain those who might be tempted to defect to Maxime Bernier's People's Party.

Other's say that Harper wanted to come out of the shadows because he still thinks the last election result had nothing to do with him. And he wants the credit if Scheer wins

I have to admit I have no idea.

But what I do know is that those who vote for Scheer and his sinister Cons will also get Harper.

And the only leader who can prevent that is the one who gave Harper the boot the last time. 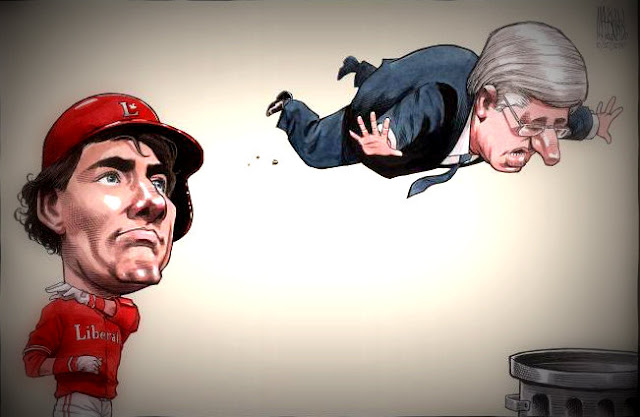 So now more than ever.

And choose forward not backwards...

Thanks Simon. If I have nightmares and can't sleep tonight I will have to blame you.

How the fuck do they think this will help them? This would be like Trump coming out of the woodwork to endorse Pence! Is Emperor Steev Harpertine really that arrogant? Obviously he is! Stephen Herpes, the disease that just won't go away!

One thing is for sure, the IDU needs to be fumigated and shut down once and for all. Canada does NOT need its own Paul Manafort being a shit disturber everywhere in the world. Go away fat cat. Shoo!

Here's an old link to one of several discussions about Harper's role in Canada...
https://unpublishedottawa.com/letter/13987/canadas-quiet-coup-how-cia-shoot-helped-install-stephen-harper-canadas-prime-minister

Also: US President Putin (R-ussia) wants control of the Arctic. Hence his bought stooge Pompeo issuing challenges to Canada's sovereignty. Sarah Kendzior has written extensively about how the world's oligarchs plan to profit from disaster capitalism by installing climate-denying fascists, who would accelerate the destruction that's already happening to gain access to the plentiful resources within. There's a more sinister motive underpinning Trump's otherwise outlandish claim to Greenland. Harper sold the wheat board to the Saudis, why wouldn't he offload the north to Russiamerican prospectors or let them duke it out in a bidding war with King Bonesaw as long as the price is right?

Furthermore, Putin also hates Trudeau and Freeland, personally. The former because of his staunch support of LGBT rights and the latter because she literally wrote the book on Kremlin bagmen. He also backs the fascists in Eastern Europe and, along with US right-wing billionaires, is bankrolling an international white supremacist Christian dominionist movement. Fun fact: Harper's buddy Orban shuttered a Soros-backed university in Budapest where the dean was none other than Michael Ignatieff. Another score with a hated Liberal settled by proxy through one of Harper's pals.

The IDU is part and parcel of it all. They are all corrupt to the core. Fascists by any other name. Seems to me Trump's daddy and Canada's own IRL Bond villain share some common goals: Power at all costs, the untermenschen be damned. Ernst Stevero Blowhard using his own version of SPECTRE to wage a personal vendetta against the prodigal son is just icing on the cake. Who is like the beast? Et tu, Comrade Andrei...?

OT but does anyone believe in serendipity? Or... reincarnation?

The Liberals have nominated a two-spirit Métis candidate in a SK riding with 13,000 indigenous people. He is looking to unseat a prominent Conservative candidate who has demonstrated a... Scheer amount of bigotry over the course of his career and in just the past week alone.

The riding, of course, is Regina-Qu'appelle. The candidate's name is Jordan Ames-Sinclair. If you take just the initial of his first name, he's....

So Justin's grandpa (more or less) is running in Scheer's riding. LOL.

Thought that was, well... interesting. Cinematic, to say the least.

Weak Andy made a very weak statement in support of Gay and Abortion today. Bill Carrol the ultra conservative passed the death sentence upon him, he said I cant vote for this intolerant person.

Like the Echo chamber is telling Harper, you were the best. He was in fact the worst, never listen to John Ibbiston or the Globe, and at an entrirely other level we have the Sun and the National Discrace.

No way the CIA wants to control Canada, some other agency already does

wipe out that evil with one vote, one draw one vote, get high on good deeds done well to dirty people.

I guess that makes three. McDougall yesterday and now Rachel Curran on tonight's PnP. Rachel said Andy failed at "issues management". I guess that kind of Orwellian business-speak is how RoboCons process the concept of "a firm commitment to human rights". Weaksauce scolding but a scolding nonetheless.

If Andy gets turfed, let's see if they run Drona next time, that is if JT doesn't steal the ball and give her a Senate post or ambassadorship first as a gift for being on the NAFTA panel. Who's left in their shallow swamp? Mad Max? Drunk Rempel? LOL. If Lisa loses to Adam and Skippy loses to Chris, that'd leave them with little more than a knife fight between Dug and Kloset Kook Kenney. The latter of whom got outed today on As it Happens, in the same breath as Baird, when the panelist started talking about gay Cons who've marched at Pride. Ooops. Grab some popcorn, the fireworks are about to start.

My first impression of the Harper video is that he has not aged well and and seems to have taken on the grey waxy appearance of Conrad Black. Then again perhaps he is just made up to resemble an image the financially greedy Cons resonate with. Wow and they complain about Trudeau's socks.
For what its worth ( and probably not much) a recent survey determined a certain subset of Cons overwhelmingly preferred Harper to Scheer. Suspect Scheer has a wet behind the ears preacher man image problem with the its all about the money older Tories. They need to be assured the guiding hand of waxy Harper will give him direction otherwise they might just stay at home due to apathy. Although Harper might comfort some of them he carries a lot of baggage that has not completely faded out of the working populations memory especially when the Cons are trying to project a forward image with a backward leader from the past that did not bestow new found wealth on the general public. Wonder how many Harper "knows best" ads they can run before incurring negative voter return on their investment?
Perhaps one is already too many!

We know very little of what Harper's been up to but I am assured that he's been plotting JT's demise since he was thoroughly humiliated 4 years ago. Kicked to the curb like a drunken lout except Stevie was drunk with power and having that taken away left him inconsolable and invisible for months. In the closet, as it were, with only a Ray of light to console him.
This video is weird and creepy. Harper's almost catatonic and on the verge of involuntary twitching. Much like he would have been in 2015 after his reign had ended. It lacks passion, sincerity and like everything with Scheer, a plan.
He should have stayed in the closet.
JD

HI rumleyfips....I don't blame you. Harper looks like one of those animatronic creations at Disneyworld. I'm afraid that four years of living in the shadows has done him no good. But to me he is an absolute gift. I downloaded the video and will use it to make some of my own...☠

Hi Jackie....I would really like to know what on earth led to Harper's appearance. The Cons are flush with money so it can't be that, and surely they must realize that Harper is still not popular and can only help the Liberals paint him as the boogy man. But Hamish Marshall never does anything without focus testing it to death, so it probably has something to do with holding on to their base or motivating them to go and vote. But as I told rumleyfips I'm loving it!!!

Hi Steve...Having someone like Bill Carroll say that about Scheer is music to my ears. I'm glad that Scheer wasn't able to fool him as he has so many others in our shabby media...

Hi RT...As I said above I thought Harper looked really weird. He needs to get his old makeup artist back, because whoever did it this time must have used a trowel to apply it. As for why they had Harper make that spot you could be right. They might feel they need him to give Scheer some weight. But unless I'm completely out of it, I can't see how it's not going to backfire. And of course if it does work I'll be leaving this country as soon as I possibly can....🏂

Hi Steve...That's such a great name. I've been trying it out on my friends, and they also think it's hilarious..l

Hi JD...That video is creepy, and it looks like Harper has been in a very dark place. He does look almost catatonic and I can't for the life of me understand why he is doing it. As I said, the Cons don't need money so that's just an excuse which makes me wonder what this is all about. Maybe it's about keeping Harper's most of extreme followers from defecting to Bernier because Maxie has definitely been gaining some support and just a few more percentage points could be fatal. Oh well as I said, I look forward to using it in my own videos as I seen others already have. Although I have a brand new video editing program that is so complicated I'm going to need a lot of time to master it. And time is the one thing I don't have...l

Hi Jackie,...I saw Curran's comment and since she is such a loyal Harperite I wonder whether what she said could explain Harper's sudden appearance. Maybe some in the Con establishment are having second thoughts about Hamish Marshall. If that's the case something must be going really wrong....