Mike Duffy and the Final Agony of Stephen Harper 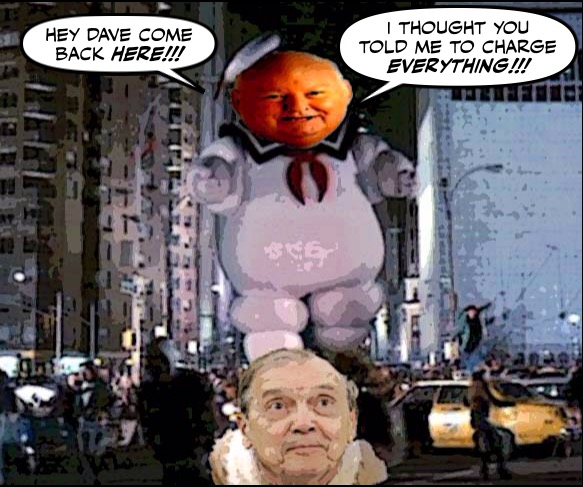 Oh dear, I see that the Mike Duffy trial just keeps on getting messier for the Cons.

Telling the court that Tkachuk told him to claim every expense he could.

On his second day of testimony at his criminal trial, Senator Mike Duffy told the court that Conservative Senator David Tkachuk instructed him it was essential he claim every expense he was entitled to, even for food, while living in his Ottawa house.

Otherwise, Tkachuk told Duffy, critics, including a P.E.I. professor who wrote a newspaper op-ed about what he said was Duffy’s lack of qualification to sit as a P.E.I. senator, would continue to question his legitimacy as an occupant of the Red Chamber.

And although Ol' Dave is denying that.

He too has a credibility problem.

A group of senators, including a Conservative, say senators David Tkachuk and Marjory LeBreton should step down from a committee that will deal with the fall-out of the Auditor General's report into Senate expenses.

The senators say, given what happened two years ago, they are not comfortable allowing Tkachuk and Lebreton to handle the next group of senators with problematic expenses

The senators say they are also concerned about recently released RCMP court documents that suggest Tkachuk and LeBreton were in close contact with the Prime Minister's Office while they were handling the Duffy case.

And as even John Ibbotson admits, none of this is good for Stephen Harper's legacy.

The legacy of Stephen Harper’s government, at least in part, ends with neither a bang nor a whimper, but a groan, as Mike Duffy finally testifies in his marathon fraud trial.

The best is still to come.

There is much more to come – about Nigel Wright’s infamous cheque and the circumstances leading up to it, about how the senator convinced himself he could claim to live in PEI and file travel expenses when in fact he lived in Ottawa, and about his relationship with the former prime minster generally.

And for Harper and his humiliated Cons it will be AGONY... 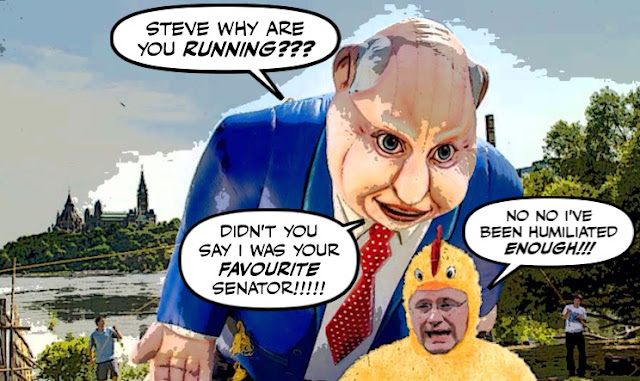 For Conservative true believers, these days of testimony will be agony, as Mr. Duffy dredges up some of the Harper government’s dirtiest laundry.

And it couldn't be a more fitting end to a sordid story.

Ol' Duffy came back to remind Harper how close they once were.

And they both went down together... 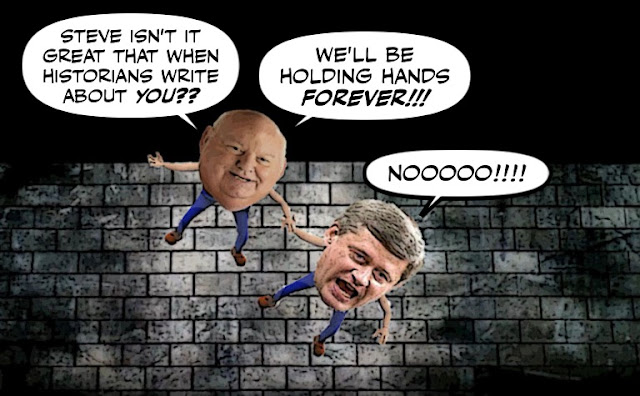 We get to the heart of the matter. If he is the senator for PEI then his Cavendish Cottage must be his primary residence. That's what he was advised. No one will contradict that fact. Sooo... it must follow that his Ottawa condo is his home away from home. Just like the other Con Senators appointed to the "wrong" province by the PM who thought his word was the law, Monsieur Le Premier "L'etat c'est Moi" Harper.

Beauty eh? I liked where Bayne compared Duffy's travel claims of $700k to Tkachuk's $700k+ travel claims over the same period. And Duff was acting frugally on behalf of the public because his $30 per diem was much less expensive than staying in a hotel while in Ottawa. Hee Hee Hee

Christy Blatchford's video report today is hilarious as she notes poor Duff's claims, of self sacrifice and self interest, were exactly the sort of claims the Duff she knew would make. I can't link to Blatchford here out of respect for you Simon.

PS Simon I'd still like to provide you with the libation of your choice.

Is there any chance that Harper could be forced to testify? I haven't paid close attention to this part of the story...

As an MP, Harper (AWOL from HoC) is protected.

It must be bad if a shameless, stool-licking Con hack like Ibbitson has to admit it. (Ordinarily, I'm not interested in a single thing that Ibbitson has to say. But this is a treat.)

He did spend a fair of his ample air time yelling about wasting yours and my tax money (which is bad when done by any government, but never or rarely when Cons did) yet became the worst case scenario when he got the opportunity at the public trough.

Even if he is found not guilty, the fact that he was publicly exposed as a hypocritical fraud and helped bring down the Cons he worked for will probably be his (unwanted) historical legacy. Having worked with folks like the Puffster, the public humiliation and (well deserved) disrespect of him will bother him a lot more than the actual jail time.

It's not at all clear that Harper can avoid testifying at a criminal trial because of his MP status.

I thought there were possible ways around that depending on what comes up in Duffy's testimony. Here's hoping.

hi p2p...well thank you for not linking to a Crusty Blatchford video, I find her written articles alarming enough. I confess I have no idea what's going to happen at the Duffy trial, but considering the cesspool he was swimming in, I can easily see him being acquitted. So all I'm hoping for is that he can damage the reputation of the Harper Cons further. If that's possible. And thanks for your offer, but as I said before if I accepted one I'd have to accept them all, and I can't do that. But I am grateful and I do consider myself a lucky person...

hi anon...I think Northern PoV is right, and I have to believe that's the main reason Harper is clinging to his seat as an MP, and not resigning like other Prime Ministers before him. But there is a grey area, and if Duffy testifies about Nigel Wright and the cheque, and his version is substantially different from what Wright said, I could see a situation where he could be asked to help clarify the situation. Which even if he refuses could be embarrassing....

hi thwap...yes Ibbitson has been a long time Harper fluffer, and let's not forget his book on how the so called "Laurentian elite" was doomed to surrender to his glorious Alberta. So I too enjoy it when he is forced to admit that he wasn't as right as he once thought... ;)

hi Dan...I have to admit that after reading about his many health problems, I'm starting to feel a bit sorry for Duffy. I know, I'm like that, and he doesn't really deserve any sympathy. He trolled for the job for years, he helped bring down Dion in a most disgraceful manner, and he did behave abominably. But as you point out, he did help bring down the Con regime, and for that I am willing to award him a shiny bottle top, also known as the Order of Simon... ;)

hi anon...yes I said above, there is a grey area. But Harper would be able to tie any request to get him to testify up in the courts for years, so considering the state of Duffy, I don't think Bayne will go down that road. But as long as the trial continues, hope still lives...