Stephen Harper and the Wall of Shame 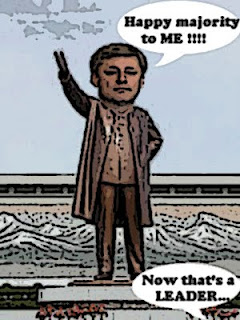 Well I see we are still a couple of days away from the one-year anniversary of the dark day Great Ugly Leader won his precious majority.

But that hasn't stopped some in our Con media from already rushing to buff his bronzed legend buttocks.

One year after winning his first majority government, a milestone he marks on Wednesday, and more than six years after becoming prime minister, Stephen Harper bestrides Canadian politics, a principled economic and social conservative who is reshaping the nation.

For anyone who could call Stephen Harper "principled" or ask this question:

Is this Prime Minister determined to dismantle the progressive state, built up over decades by previous governments? Or is his truly a moderate, centrist regime that has abandoned its radical roots and betrayed its conservative base?

Without ever properly answering it.

Is either unable to see the forest for the trees.

Or in hurry to get to the Senate... 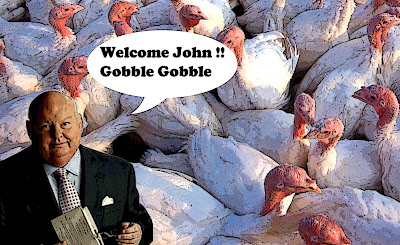 For surely Ibbitson is not talking about the mad Dictator of Petrolia? The power hungry control freak who has plunged our country into The Great Darkness, is raping our Canadian values, turning our parliament into a fascist circus, our country into a prison state. And shaming us in the eyes of the world.

And surely after six years of the Harper regime, it shouldn't be too hard to call him what he clearly is; the ghastly leader of the worst and most dangerous government in Canadian history. And a pathetic tool of Big Oil.

But then Ibbitson is not alone. In fact, when the Harperites are finally defeated, we are definitely going to have to build a Canadian Media Wall of Shame.

Where we can keep the memory of their shame alive. And the Cons can go to drown their sorrows. Mourn their lost leader, who by that time should be in prison... or Paraguay. Light candles and leave offerings.

And thank all those in the media who helped keep him in power for so long... 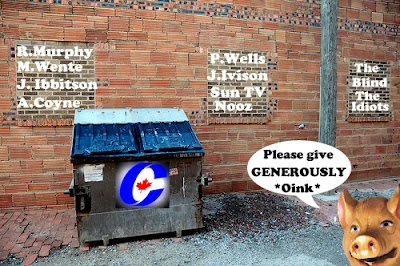 For he couldn't have done it without them.

The ones who made what he was doing to Canada sound normal. The ones who saw genius instead of evil. The ones who called him an economist, instead of a quack, and a rabid ideologue. Or the mobster leader of a Con gang capable of stealing an election, or cooking the books.

Oh boy. I realize their corporate masters have them on a tight leash. I realize most of them live in the idiot village of Ottawa where politics is just a game. I realize there are some honourable exceptions.

And some honest journalists.

But the fact is most of them let us down when Canada needed them the most.They should have known what Stephen Harper would do to this country if he ever got a majority.

But too many were too afraid to call a spade a spade. Others were too cowardly to say anything at all.

Until it was too late, and the darkness was upon us.

And what more can you say or do eh?

Except wear a black armband on Wednesday. And now more than ever, unite to defeat this ghastly regime and its morally depraved leader. Before they destroy this country.

Before they corrupt us all...

Cocooned in their own little world, comfortable because they've scored positions as paid toadies to corporate Canada, hacks like Ibbitson really don't see how they've completely shredded their credibility.

Millions of us know, and we just roll our eyes at their pomposity and stupidity and their self-delusion.

hi thwap...you know what really bothers me? Not the pomposity, or the fact that so many Ottawa hacks treat politics like a game, but the absolute lack of any moral dimension.
When a political party acts like a bunch of thugs, it doesn't matter what side of the great ideological divide you are on, they should be condemned by EVERYONE...