Hate Crimes and the Fatal Blindness 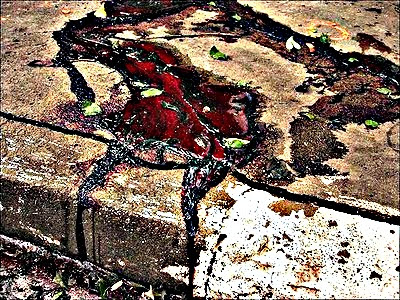 I'm glad to see that reported hate crimes are down in Canada. It's really good news for most people. Just not so good if you're gay.

The report said, though, that while the rate of racial hate crimes was down 20 per cent from 2009 and the rate of religion-based incidents was down 17 per cent, rate of crimes linked to sexual orientation was relatively stable.

Which is disturbing eh? For who wants to be attacked by strangers on the way to the supermarket? Or watch your lover's head being bashed in with a baseball bat. Just for who you are, and who you love.

But what's even more disturbing about this story is that the CBC, and CTV, and a number of other media outlets forgot to mention this bloody little detail.

Gays were more likely to be victims of violent hate crimes. Two-thirds of incidents targeting gays were violent. A third of racially-motivated offences and 17 per cent religiously-motivated crimes were violence.

Talk about a fatal blindness. That old devil homophobia still blinds so many.

Golly. You don't think Stephen Harper's government might launch a national anti-homophobia campaign? Like so many other countries have. Do you think we could have a blog burst like we just had on the abortion motion? Or a Twitter tornado?

Nah. I didn't think so either.

But I'm not discouraged eh? I'm determined to live long enough to not collect a pension and die in poverty. In my bed instead of on some sidewalk. I have studied martial arts, which might be helpful.

And if somebody should ask will it ever be safe to be gay in Canada? 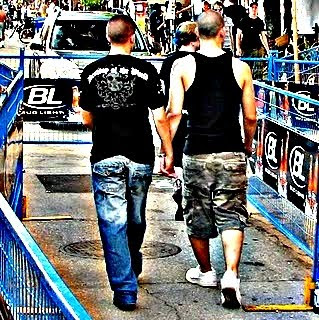 I would say DEFINITELY.

For I have seen the future and it's BEAUTIFUL.

I may hate pink eh? But when I see young Canada, in all its glorious diversity, standing up for bullied kids, and against the hate that kills. And I see how the movement is spreading across the country.

I know that they will be the ones who will finally destroy the old demon homophobia.

The present is still dangerous.

But the future will be safer...

I fancy myself a strong Conservative with a libertarian streak. It actually pisses me off that so many morons have issues with gays. Are gays/lesbians bothering you? no. Are they infringing on your property or physical person? no. Are they stealing from you? no.

Honest to fuck, Conservatives, they are not going to hit on you or grab your butt or "convert" you into their "life style" choice. They are NOT interested in that. So relax.

For a group of people that claim to respect individual rights, the Right seems rather hypocritical in this regard. The one response I seem to get most is that gay sex is "gross". WTF? Grow up! Honest to fuck, some people (FOX commentators, Republicans and some church leaders think more about gay sex than gay people do).

Really wish these people would give their pin-heads a shake and get the hell off my side of the spectrum. Sorry for the rant here (obviously I've surpassed my caffeine intake for the evening), but seriously, the more stupid comments I read and here on this topic from some quarters is several levels beyond moronic.

If these ass clowns were true conservatives they would respect individual liberty, the liberty they claim to be so sacred...except sadly if its the liberty of an individual with whom they happen to see differently.

hi Way Way Up...what an excellent comment. Well said. I think you're right. A true conservative wouldn't persecute gay people like the modern ones do, especially in the United States. But the pattern in the U.S. was set right from the start by the Puritans who first repressed and then murdered the native people who had far more liberated views than they had. The mixture of religion and politics is a curse that haunts them still. And unfortunately some of it spills over into this country, and is made worse by the Catholic hierarchy of the ghastly Pope Benny. I will never understand why some people are so threatened by gay people they want to kill them. It's absolute madness...