My New Version of the Brawl on the Hill 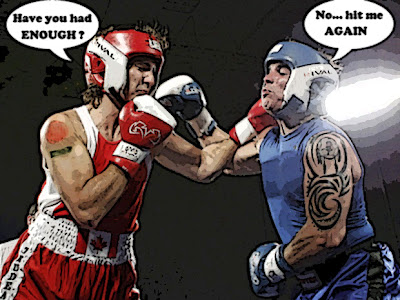 Gawd. I'm in the doghouse again. Some of my friends have been beating up on me for my post about the Thrilla on the Hilla.

For they were shocked and appalled that I should "glorify" such a brutal spectacle, and then crudely bait the Cons. And by so doing lower myself to their level.

I tried to explain to them that they don't call me Raging Simon, or the Beast from Montreal, for nothing eh? And the only reason got carried away in the heat of the moment  was after listening to Ezra Levant's grotesque commentary.

I told them they should fast forward this video to the two minute mark and ask themselves whether THEIR heads wouldn't explode to hear such nerdy nonsense ...


But my friends said that I should know better than to listen to ANYTHING Ezra Levant says. And of course, for that I had no answer.

So now I agree that I should have written the post this way:

In Canada, home of the National Concussion League, where Don Cherry is a god, and the Prime Minister is a bully, two politicians got together to try to beat their brains out, to raise money to fight cancer. Millions of Cons were hoping that one of the fighters would killed just because he's the son of Pierre Trudeau.

Stephen Harper revealed himself to be a bad loser:

Mr. Brazeau said he received a phone call from Prime Minister Stephen Harper a few hours before the bout to wish him luck. The senator said he hasn't heard from him since his loss. “I don't blame him,” Mr. Brazeau said.

But the managing editor of the Ottawa Citizen declared the spectacle so honourable it might qualify both fighters to become future Prime Ministers.

Will either Justin Trudeau or Patrick Brazeau go on to lead their respective party? Might either someday become prime minister?

Who knows. But if either man does go on to become more than he presently is, they will say that it all really started in a boxing ring, on a Saturday night in a hotel ballroom, in Ottawa's east end.

And in the House of Commons today, the Liberals were reciting poetry and wearing boxing gloves.

So did I go overboard in my post about the The Thrilla on the Hilla? The Gorilla Show in Ottawa?

Oh probably. But I am not the only one eh?

You are who you are.

Ah, ... while I'm a little surprised how many "progressives" think that Justin Trudeau is prime ministerial material because he won a boxing match, (or that winning a boxing match helped), I don't mind boxing entirely.

There's something to be said for the skill, endurance, self-control, displayed in a good fight. It's sort of like prostitution. The main thing that mars prostitution is the often non-voluntary nature of it.

So long as people go into boxing or any sort of combat, because of poverty, it's problematic for me.

I thought I'd listen to Levant's commentary for laughs but then I remembered how much I utterly loath him so I didn't.

All I could think afterwards, the kid, Trudeau, maybe tougher than I thought he was. I don't think either is qualified to be P.M. but then if you look at Harper, ya maybe the liberal kid. We;ve had enough of the conservative p.m.s for a 100 yrs or so.

hi Thwap...I'm not a fan of boxing. I think it's dangerous because so many blows are directed at the head, and too many palookas get into the ring, who should never get near one. I much prefer martial arts, because they offer calm and discipline, and are more technical, artistic, and less brutal. On the other hand I trained for a number of years at a boxing club,and I found a lot of boxers to be extremely gentle and pleasant people. Also Olympic boxing is quite a bit better than the professional jungle. But brain damage is brain damage. Which reminds me, you made a wise decision
to not listen to Levant. For he was never more revolting, and I have rarely been so disgusted...

hi e.a.f...I think Justin needs to mature a little more before he can aspire to be Prime Minister. But I admire his idealism,his heart is in the right place, and we need all the youthful energy we can muster at this critical time in our history. So I wish Justin all the best. And of course I'll take ANYONE but Harper... ;)

I like the part where Ezra comments about one of them taking a hit to the "tummy". Wtf.