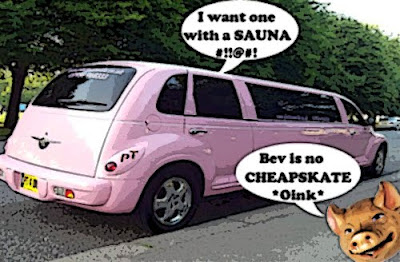 Oh no. Somebody call Limousine Anonymous. I see poor Bev Oda has had another unfortunate relapse.

Oda was originally supposed to stay at the Grange St. Paul's Hotel, the site of the conference on international immunizations she was in London to attend. The Savoy is two kilometres away and Oda hired a car and driver to shuttle her between the hotels and around London over her three-day stay.

And as usual, the taxpayers were stuck with the bill. Except that this time not only were the limos expensive. So was the even fancier hotel.

The bill for the three-night stay at the Savoy was $1,995 or $665 per night, and the pricetag for the chaffeur service was $2,850, according to the Canadian Press. On the first day of the conference, the Canadian government paid for the car to be on call for 15 hours.

She also expensed a bottle of orange juice from the mini-bar at the Savoy that cost $16.

But Bev's not apologizing for having good taste. Like Charlie the Tuna.

Oda said she has "nothing to be embarrassed about" and that ministers have a responsibility to represent the country well while abroad. She also said the criticism from the opposition parties over her travel bill was "extremist."

And who can blame her eh? I mean would YOU stay in this hovel? 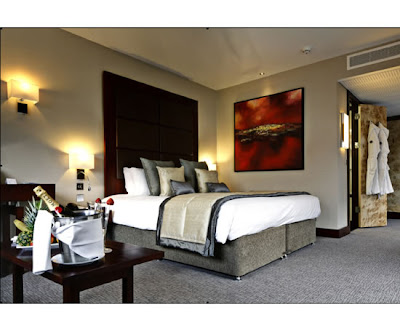 Even if you didn't have to pay for it.

Just look at that giant smoke detector right over the bed. Where was Bev supposed to have a drag....in the walk-in closet or the cavernous TOILET ????

And besides, how was she to know that she was being naughty again, when the last time she played Ivana Trump, or just went hog wild, Stephen Harper didn't  spank her. He patted her on the behind.

Why would she have to settle? Why would she throw caution anywhere except to the wind? She did what she did and her party did better and she did better and the PM gave her her job back. There’s no orange juice too good to celebrate the way that must feel.

Which only leaves me with two questions eh?

One, how much booze do the hunky bartenders at the Savoy put in that orange juice to make it so expensive?

Because after listening to Oda  I feel the urgent need for one two three of them. Please?

And secondly, after her brutal cuts to CIDA.

Twelve of the world's poorest countries - including Afghanistan, Pakistan and seven nations in Africa - are going to be hit as the Conservative government looks to slash $377 million in foreign aid over the next three years.

The exact impact on each country is unclear, but the cuts are expected to prompt anger and frustration from the affected countries, which rely on international assistance to provide food and other services to millions of citizens

What would she say to this starving child? 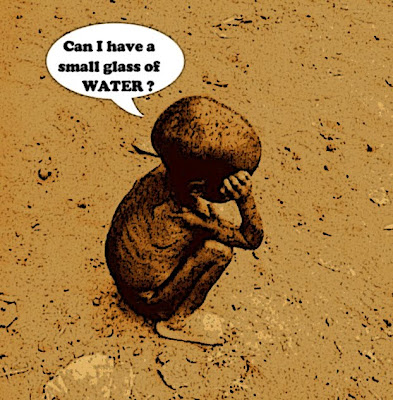 They're living it up, partying like there's no tomorrow, while cutting jobs in Canada, and slashing aid to the most desperate.

Buy Bev another orange juice from me eh?

If we can't arrest those ghastly Cons, when can we defeat them?

Apparently the more expensive hotel is equipped with indoor smoking rooms. That might have been the main goal and the limousines and $16 orange juice were just a nice (and expensive) bonus.

Please tell us that she gets the boot. Isn't there a conservative M.P. that could and would do a better job and give some respect back to the Conservative government? I think many of us are disappointed in our political representatives. Please politicians you are supposed to be working to make Canada a country to be admired, not a joke.

Flaherty and Mackay like their $1,300 luxury hotel suites too. Our tax dollars are a free for all, Harper and his Conservatives help themselves to our tax dollars every day.

Harper gives billions of our tax dollars to, banks, mines and gas and oil corporations. He gives them huge tax reductions, on top of the billions.

Did Harper need the $1 billion dollar, stupid fake lake? Harper's $45,000 spent to go to a ballgame. The $11,000 per hour jet, to take in a hockey game. Harper's whopping $47 million dollar security bill? No way is he worth that. The $50 million thieved for campaign money.

Harper is a Neo-Nazi Reformer of, his Northern Foundation Party, from 1989. The skinheads organized harper's fascist party for him.

To expect anything good from Harper, is an exercise in futility.

hi anonymous...I'm sure that's what it was. I only wish I could have seen the look on Oda's face when she found out she had been booked in a non-smoking room. But what can explain her love affair with four or six-wheeled vehicles? She is truly incorrigible...

hi anonymous...I am sorry but she definitely won't get the boot. As Paul Wells explains in the post I linked to, nothing she does seems to bother Great Ugly Leader. She does a lot of his dirty work for him, especially with women's issues, so she can get away with everything. To think those Reformer rode into Dodge City claiming they wanted to clean it up, and now they can't get their noses out of the trough. It would be funny if it wasn't so pathetic...

hi meadowlark...don't worry I don't expect anything from Harper and his Cons. All I expect is that progressives will finally get their act together and do what is necessary to defeat them...

Really such a great hotel for enjoy and fun.