Danielle Smith and the Lake of Fire 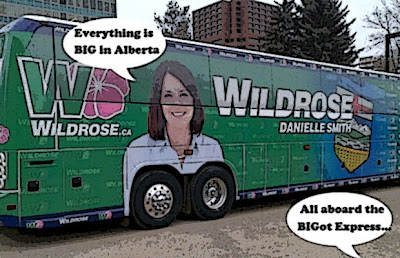 Until about ten days ago I clung to the hope that all I ever needed to know about Danielle Smith was that she was the new Evita of the Alberta Teabaggers, and Big Oil's Bubbah Barbie doll. The one with the big wheels.

That she had vowed to make it easier to drink and drive. That she had been cruelly accused of not breeding enough...like a good Alberta cow. And that Tom "Strangelove" Flanagan was her campaign manager.

But of course now that polls suggest she could be the next Premier of the right-wing petro province, I've been forced to pay more attention to the Wildhog campaign and the stench is overwhelming.

Not only because her redneck party is full of some of the worst cranks and crazies this country has ever seen.

Including this grotesque anti-gay bigot.

If you "were born this way" are you going to "die this way?"Well if that is true, and it is, then you have fallen right into the trap that is as old as time. That trap is what satan wants for you, but is that what you want? You see, you can live the way you were born and if you die they way you were born then you will suffer the rest of eternity in a lake of fire, hell, a place of eternal suffering. Now at this point I'm not judging, I am just stating a fact !

But also because she's shameless.

“I’m not going to be the sort of politician who engages in discrimination against religious candidates,” she said.

Let’s be clear. The issue isn’t Hunsperger’s constitutional right to his sacred beliefs. The issue is his public position that Edmonton schoolkids shouldn’t be protected from discrimination on the basis of sexual orientation, and that public schools are wicked for trying to create safe, equal classrooms. He’s not the victim here. The victims are our community’s children, who deserve to go to school without fear, without being told by their aspiring MLA that they’re damned to eternal torment because of who they are.

I mean really, how many rodeo klowns does it take to ride a burro back to the 1950s?

A leader who can't tell the difference between free speech and hate speech doesn't deserve to be elected dog catcher. And a party so full of  depraved  wingnuts  shouldn't be allowed anywhere near power.

And I mean ANYWHERE.

Oh well. I'll never understand why there are so many homophobic bigots and other drooling crazies in Alberta. Or why those firewall fanatics hate Canada so much.

But I think I found the Lake of Fire eh?

Somewhere between Sodom and Calgary. 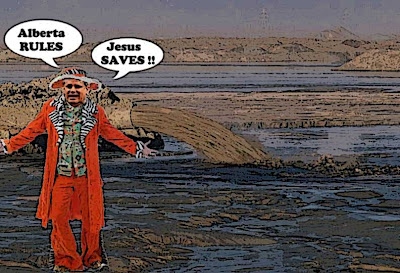 Alberta, the shiny oily new heart of Canada. The New Jerusalem of the West.

My bringing up Albertan intolerance and bigotry over at Far and Wide saw me sent to a link about this mornings murder of a gay man in Halifax. The implication being it's the same all across the country. It's not of course. Not even close, but some seem incapable of getting their heads around that.

I hope that this clown doesn't become the new Premier.

I think you'd find that Alberta is no more socially conservative than Saskatchewan or rural British Columbia.

The right-wing economic delusions arise out of the oil industry. Sometimes that mixes with pseudo-Christian silliness.

It's pretty clear that in the capitalist-driven USA, there's been deliberate cultivation of Christian-based insanity by the moneyed classes. Perhaps something similar is at work in Alberta?

Oil is very delusive. It requires hard work to get out of the ground, but the work is extremely well compensated. Thus the people who extract it fall into the delusion of thinking that ALL hard work is well compensated, and that if someone is poor, it means merely that they are lazy. May they all be reborn as fishermen in Newfoundland.

It would see as if you are a little misinformed on this article. First of all, is their views on gays are not discrimatory in any way. The option that the pc party would like to see is that priests who object to, and believe they are aiding a sin, would be FORCED to marry a gay couple (who could also walk down the street to find a ordained minister to marry them, but act like that is just such an inconvinience that they no longer want to get married or something). The same goes for doctors who oppose abortion, they would also be FORCED to perform a abortion and rip the baby out of the mother. The are protecting peoples moral and religious views. It may be the fact that it is a catholic issue, because I do not believe that they would force a muslim person to ignore their beliefs. It also seems as if you have never listened to any of the debates, and only have interest in the articles that put the wr in a negative light. If you lived here in Alberta you would very quickly realise how much the rest of Canada piggybacks off of Alberta resources and finances. The people who work hard on the oilpatch (Which I dont but I do understand where they are coming from) absolutely despise the fact that they are being underpaid (and anybody who says they arent has never done a shift at the mac) to put some grown adults through school.

hi Steve...I suppose a fatal attack could happen anywhere, but I've never so many candidates in a political party spouting bigoted views, and not getting at least reprimanded by their leader. It's a disgrace, and I don't call them the Wild Hog party for nothing....

hi anonymous...I share your dismay. Once again a Con has managed to fool a lot of people. Danielle Smith should know better, but then so should a lot of Albertans...

hi thwap...you may be right, because both those other places you mention are really socially conservative. But somehow over the years the one's in Alberta seem to be the loudest bigots in the land. I actually think the oil industry may help change that by attracting young workers from all over Canada. But Alberta has always had a special relationship with the U.S. and is bound to be affected by what's happening in that country. And what's happening there is madness...

hi sunsin...that's an interesting thought. And yes, may they all be reborn as fishermen in Newfoundland... :)

hi Mr D...I hear what you're saying, and I do believe in freedom of religion, even though I'm an atheist. But what really bothers me is when people like Hunsperger direct their criticism at programs intended to protect children from being bullied. For I consider that totally unacceptable. And I must say, since I was raised a Christian, I can't remember Jesus going around spouting hated against gay people. In fact I'm pretty sure he never said a word about that, and only asked people to love one another. Or am I reading another Bible?
As for the people of Alberta, I hope they realize that Smith is just a complete puppet of Big Oil, and that she doesn't really care about them and will only help Big Business turn Alberta into a low-wage province, just like the Harper Cons are doing to the rest of the country. But it looks like the WR is going to win the election so they will find out, the hard way, sooner rather than later...

Danielle Smith was FIRED by the CFIB and The Calgary Board of Education....for using those organizations to advance her own political career, instead of doing her job(s). I hope that the people of Alberta realize that Danielle Smith doesn't care about anybody but herself!