Mike Wallace and The Homosexuals 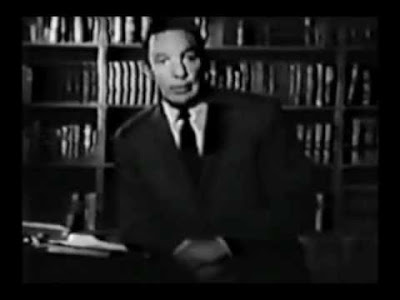 I see that Mike Wallace is being given a grand send off and is being called a journalistic hero.

The newspapers are full of glowing obituaries, and TV stations have been running clips of his most famous interviews and documentaries.

But funnily enough nobody mentioned the famous documentary LGBT activist Wayne Besen has described as the single most destructive hour of anti-gay propaganda in U.S. history.

The one where Wallace said this:

The average homosexual, if there be such, is promiscuous. He is not interested or capable of a lasting relationship like that of a heterosexual marriage. His sex life, his love life, consists of a series of one–chance encounters at the clubs and bars he inhabits. And even on the streets of the city — the pick-up, the one night stand, these are characteristics of the homosexual relationship.

I can't imagine what a young gay person would have felt watching that broadcast.

I can't imagine what it must have been to live in a time like that one.

But the next time some old straight person waxes nostalgically about the good old days, I'm going to ask them what they did to stop gay people from being treated like subhumans?

And if they say they didn't do anything, I'm going to ask them why not? And do they even feel the slightest bit guilty?

Mike Wallace may have been a good newsman.

Your link says that Wallace still hadn't recanted his erroneous beliefs by 1995. (Don't know what happened after that.)

That piece seems to have done way more harm than good, though admittedly I'd never heard about it before today.

Change a few words around and that same quotation would apply to a lot of camp workers that come here from other parts of the country.

I have difficulty believing MW never recanted this. But, since you ask, I'm your "some old straight person" and, like plenty of other old straight persons, I did what I could to stop gay people from being treated like subhumans, beginning right within my own family. So stop being such a pompous fucking git.

I can only cringe at hearing this. J. Edgar Hoover was an overbearing influence of this age, remember. We just have to work to make sure pieces like this are regarded as a laughingstock. "The problem..." Fuck, get real!

Don't let it get you down Simon. I know a few teenagers today, and for them being gay is not a taboo. It's a style. That is a monumental improvement from when I was a kid in the playground, pointed at and called (derisively) <>! i knew then i was a subhuman in their eyes. Wankers.

hi thwap...I'd heard of it, but I'd never seen the video, and I must admit I was stunned, not just by the words but by the images. That's how you set people up for genocide. First you portray them as shadowy subhumans, then you make them seem threatening, then you kill them. But then Wallace was just a creature of his times. How awful they must have been...

hi Way Way Up... I'm sorry to hear that. Humans seem to have a streak in them that makes them want to destroy "The Other." I knew we should have gone with the Bonobo monkeys instead of the chimpanzees.
And of course they never ask themselves this question: Would you really want to live in a world where everyone was the same? What a boring place that would be...

hi Mound... a pompous fucking git? An annoying fucking git maybe, but never pompous. And what are you being so grumpy about anyway? I watch a video, I'm shocked, I wonder how society could have treated gay people that way. And just because I add something to the sum of Mike Wallace's life, and you're wallowing in nostalgia, I have to apologize?
Mound please, it's Spring, try to be nice eh?

hi Scott...I suppose you're right. One day we will treat those clips like the ones in Reefer Madness.
But I was surprised at how shocked I was when I saw the video, because I honestly didn't realize it was that bad. But don't worry I won't let it get me down. I see how things are improving. The other day I saw two young teenagers strolling off the ferry hand in hand. And rather than think of it as was it that bad such a short time ago? I prefer to think of it as boy have come a long way in such a short time... :)

Wow. That was a bit of history that I hope remains history, but your more recent post on Bill 13 scares me. :(