Stephen Woodworth and the Abortion Debate 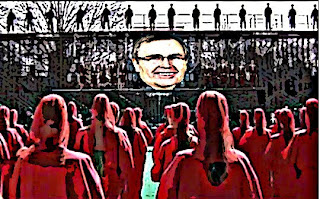 Oh. My. Gilead. When I saw those women in red on Parliament Hill today, I thought  the Harper Cons were getting ready to re-enact their favourite scene from The Handmaid's Tale.

When the women are brought before the men, told to be submissive as Lord Harper's missionary church commands them. And a gnarly old man gets to grope their rights, and instructs them to breed or ELSE.

And sure enough they were.

Abortion rights are at the centre of a debate set for Thursday as MPs consider whether to hold a special committee to look at when human life begins.

Except that the star of this absurd wingnut pantomime, Stephen "Woody" Woodworth, seems to have changed his script at the very last moment.

When he announced the motion, Woodworth had argued he was simply interested in updating the law to agree with 21st-century medicine. But speaking to Radio-Canada on Monday, he admitted his motion is linked to abortion.

"It certainly allows us to have an honest discussion about the abortion question. How can we honestly discuss all of the complicated issues around abortion if we cannot decide whether or not a child is a human being before the moment of the complete birth?" Woodworth said.

So now even Woody admits it's just a sneaky way to re-open the abortion debate. After denying that for months. Gawd. Satan release him. Doesn't he even know the Ninth Commandment?

But then why should we be surprised eh? When he's a religious fanatic who believes that life begins at conception, and he's a member of the Knights of Columbus... 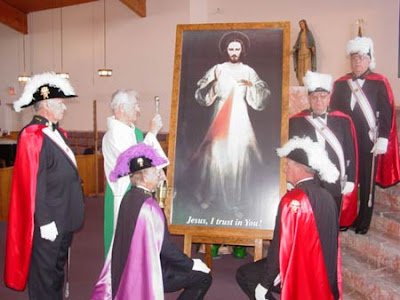 You know, the old geezers with the funny hats.

Oh boy. Save me Jesus. Or fan me with a turkey feather. And the good news?

You know all those women in red on Parliament Hill today? Well some of them WERE playing handmaids.

But they're not submissive... 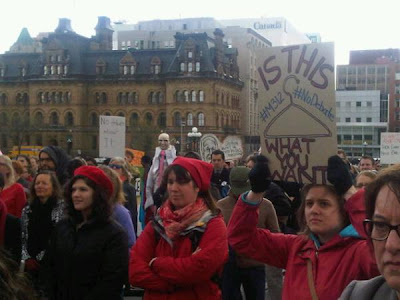 And of course, I'm with them eh?

Because we need to re-open the abortion debate in this country like we need a hole in the head. And those who would jail women for having an abortion, would also jail me. Or cast me into the Lake of Fire.

Tell those Cons to stop trying to control women's bodies.

Tell Stephen Harper to stop feeding his rabid religious base.

And of course, as I've said before. For it can't be said enough.

Tell Woody to go screw himself, and have as many children as he wants... 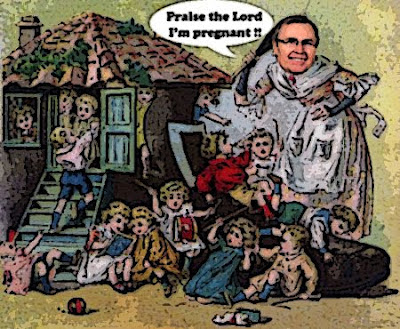 I am sad tonight. Maybe even pissed right off. I know the Conservatives might try to pull off this kinda crap. The Liberals have done so in the past as well. I had hoped that under Bob Rae they would grow a spine.. They haven't. Rae is allowing a free vote on M312 today.

At the same time he is allowing a free vote the the Liberals are asking people to sign a petition slamming the Harper Conservatives on the motion.

They can't have it both ways. Either the Liberal party supports human rights of women, or they don't.

Who in the Liberal caucus tomorrow will vote with the Conservatives? I really hope they won't. I really hope Rae is playing a game and all Liberals will vote against M312.

What's equally disappointing is the Liberal bloggers. I have yet to see one of them call on Bob Rae to reverse his decision to allow Liberal MPs to vote against women's rights.

Any Liberal MP who supports this so-called "private member's bill" will be in my mind a Harper Conservative.

I agree with Pamela - excellent to both Rick and Simon. You know, Rae stated a long time ago that he had wished, when he was premier of Ontario that he had whipped the vote for gay benefits.
I guess he forgot about that previous progressive experience and is repeating history. What an idiot - he learned absolutely nothing.

Very true, but knowing Mr.Harper and his Conservatives, this is not over. Harper is not stupid enough to come out and debate something like this in the open, this if anything could of been a testing of the waters sort of bill request.

I do fear that in the coming months and if the recession shows more signs of continuing on, that something like an abortion debate might show it's head, but be covered up by using the economy as an excuse.

For example: We need to restrict certain parts of the system in an attempt to save money, whether this requires women to go through more a process in order to get an abortion or by only covering half the procedure in order to cut spending.

You may think this is over reacting and not a possibility, but with this government in a majority, do not be surprised if it happens. Feel free to read my own blog entry and add in your thoughts as well.

Hi Ricky...I can't understand what Bob Rae is up to, it just doesn't make sense. But I seem to recall that the Liberals did the same thing with the SSM vote, and this is just as disgraceful. Oh well, at least the NDP did the right thing. The more I see of Mulcair, the more I like him...

hi Cold North Wind...thank you I enjoyed writing it. You know what I always say, when they fight you it's one thing, but when they laugh at you it's OVER... :)

hi jan...yes I told Ricky, I can't understand why Rae did what he did. A matter of conscience? Didn't he even see what happened to the Wild Hog Party? Maybe you're right, the man is an idiot...

hi Anthony...I agree with you completely. You can't trust those Harper Cons as far as you can spit. Especially since once the public funding for political parties is ended, the Cons will depend on their rabid base more than they ever have before.
And no I don't think you're paranoid. As was once explained to me by a very wise old activist, paranoia in a time of tyranny is a higher state of consciousness... ;)

hi Skinny Dipper...if the Cons come out of this fiasco looking better than the Liberals, I think it's safe to say that the Liberal Party's days are numbered. Rae shouldn't have been allowed to get away with it, but somehow he was...

When will these "bleeps" from Harper's Fairyland understand that they do not have control over another person's body - male or female.

What if someone they loved was raped and then forced to carry that child for nine months.

While I am on my rant tell Harper to bleep off with the Queen and Royalty. Trudeau, my parents, and many Canadians fought hard to get the bleeping Royal Family out of our country and this JERK is letting them back in and pissing off the Americans in the process by touting the War of 1812 as something good???? - maybe for the States because they kicked the bloody British out and we were stupid enough to let them stay. HE is mad, someone should send him a straight jacket.