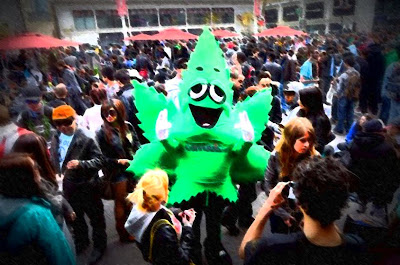 Not an annual protest.

A crowd estimated at more than 10,000 people gathered outside the Vancouver Art Gallery Friday for the annual marijuana smoking event known as “4/20.”

That just keeps getting bigger and bigger.

But who can blame them eh? With Stephen Harper preparing to send more and more young Canadians to jail for the "crime" of smoking marijuana.

And who can explain why the Liberal Party set out today, on a marijuana cloud, to attack the NDP instead of the fascist Cons?

"This is a new NDP, and we are going to tell people about it," said Samuel Lavoie, president of the Young Liberals of Canada, in a statement issued on April 20, a day widely known in marijuana culture as "4/20," when thousands gather for "smoke-ins" in cities across North America.

Especially since when the smoke did clear I STILL couldn't tell the difference between the two parties. Neither of them apparently mentioned all the Canadians who are going to go to jail. And both are too chicken to say it like it is:

The war on marijuana is the most absurd part of the absurd and failed Great War on Drugs. Nobody but NOBODY should go to jail for smoking pot. Nobody who drinks should criticize anyone who smokes, because marijuana is a much safer, and gentler drug than alcohol, that turns humans into ANIMALS.

And of course, and above all, Stephen Harper is a deranged punishment freak.

Harper has not embraced legalization, however, saying April 16 in Santiago, Chile that "very, very few leaders think that anything should be done other than fighting this particular scourge on our populations."

And the real scourge of this land.

As for me, I don't smoke as much weed as I once did. It makes me sleepy, and if I get high, and then think of the state of this country, I'm afraid I might have a panic attack.

Or stare at the sun and deliberately blind myself, because I so hate what I see.

But I will say this eh? The day the monster Harper and his gang of "law and order" criminals are defeated, I'm going to roll me one the size of a baseball bat, and party until I DROP.

For it will be a glorious day.

I am a New Democrat and I support legalizing pot and other drugs. I do accept that the first step may well be decriminalization. This matter will likely go that way if the NDP forms a govt, minority or majority after the next election.

What about those who don't want to subjected to the nasty smell? Just asking. I know it gives me one hell of a headache.

With Harper's new dumb on crime laws, one of my concerns is for those who may grow their own plants and/or smoke it for medicinal reasons, some of whom, even supported by a doctor.

Mulcair really went on the wacky side when he said that pot causes mental health issues. I work in the mental health business. The consulting psychiatrist even has no worries about pot. Hmmm, a psychiatrist? I'll take her word for it.

I am also a NDP member (60) and support legalization.

Now that's funny, coming from someone who practically lives in the tar sands of Fort MacMurray. Tar sands, I'm sure smell like pot pourri by Febreeze.

hi Rick...I can settle for decriminalization until society grows up, but I would like to see the NDP come up with a clear determination to do that....

hi CK...I agree that Mulcair must have been watching one of those Killer Weed movies, but at least he clarified his position.

And as for the Liberals, how can they attack anyone, when they promised to decriminalize weed, but never delivered?

hi anonymous...good for you. And if you're sixty even better. We all need to get something going before even more Canadians are sent to jail for no good reason...