Stephen Harper and the Moral Abyss 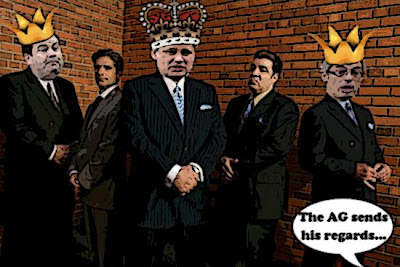 First they were fingered by the Auditor General for diddling the truth.

So that's it then: They knew and they lied. To Parliament. To all of us...if the AG is to be believed — one has to qualify, so explosive are his remarks — then the Harper government's credibility is in tatters, as is the prime minister's personal credibility. With more than three years to run in their mandate, the Tories have driven the bus into a concrete wall of their own making.

Then Stephen Harper invoked the mob's Code of Silence, so he didn't have to answer the obvious question.

When did the Prime Minister become aware, for the first time, that the true cost of the aircraft proposed was $25 billion and not the $16 billion fiction that he has been presenting to the House of Commons for 21 long months? When did he know?”

The Prime Minister stood, but ignored the question entirely.

And Peter MacKay who should have been fired, or have the decency to resign, mocked an NDP member for being bald.

“The member can light his hair on fire, or not,” he mocked, “but he can listen to the Auditor General’s words and be accurate.”

Then Christian Paradis who also should have been fired for his unethical outrages, was forced to defend one of his staff for using a government credit card in Las Vegas.

And it was revealed that Bruce Carson, Harper's former advisor and very good buddy, is still struggling with his own ethical problems.

But get this eh? Even as they splashed around in the mud, like hogs, the Cons still found time to call an ordinary citizen, and congratulate him for being a crime fighter.

Muahahahaha. Can you believe that? This isn't a government this is a Con klown conspiracy.

You know Andrew Coyne calls it a "government in collapse."John Ivison writes that "Canadians were nearly played for fools."

But I want everyone to know that they NEVER fooled me. I always knew, even when I was younger, that those were the people my parents warned me about.

I always knew that Stephen Harper would lead the Cons into a moral abyss. For the man hates Canada, and everything he touches he corrupts.

I always knew that this foul regime would collapse under the weight of its many crimes. And now it's finally happening.

The Cons may think they can get away it. But they are wrong.

For we will remember, we will defeat them.

And there WILL be justice... 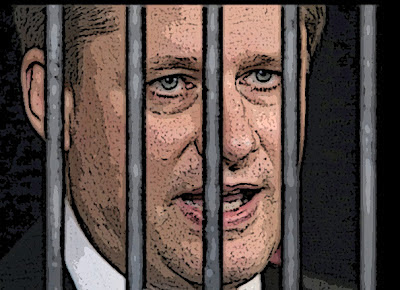 It's all over but for the squealing. And you bet those fuckers will squeal.

I tell you, our ears are going to hurting from the squealing. The whining. The accusations. The disgusting hypocrisy.

But eventually, it will all be over. Their leaders will be in prison. Their party bankrupt. Their stupid-ass supporters shouted down whenever they lose their sense of shame.

And this country will rebuild.

You knew and I listened to you. Thanks for carrying the banner strong and high!

I never called it a "government in collapse." I said the F-35 affair illustrates that our "system of government has gone to hell," but that's a different idea.

I didn't expect much from the neo con harperits. I read Stevie Cameron's book, "On the Take" about the Mulroney yrs. Of course Mulroney just looks like a piker next to the harperits.

I always found it amuzing that parties who promised fiscal conservatism didn't deliver what people thought they would. I came to the conclusion fiscal conservatism means to these neo con parties, everybody but them needs to conserve their financial resources so the neo cons can "steal" it.

Canada spent less under the Federal Liberals than the "Conservatives". There is nothing conservative about "Conservatives". They spend like there is no tomorrow, lie & cheat, tax to the limit the citizens of the country while they sell our natural resources to foreign corporations & governments.

Time for Haper & his crew to go to jail. There are so many scandals we are starting to make some other dictatorships look good.

hi thwap...I knew I could count on you to keep my spirits up. ;)
I too believe that even in this debased country reason will eventually prevail. When you look at the Con's record, it's so long and so wretched it boggles the mind.
History will judge them harshly, and hopefully so will we...

hi anonymous...thank you I appreciate that. I haven't achieved much in my life, but at least I can prove that as long as five years ago I knew what would happen if Harper and his gang ever got a majority. So a D for achievement, so far, but a B+ for prophesy... ;)

hi Andrew...sorry for quoting you so loosely. However I feel I must say that since the system was jimmied by the government, the difference between what you said, and my misquotation seems a trifle academic...

hi e.a.f...I completely agree, the Cons have made an art out of standing the truth on its head. They spend like drunken sailors, then slash and burn like maniacs, then call themselves good money managers. It's more than outrageous, it's absolute madness. And hopefully one day it will also be their downfall...