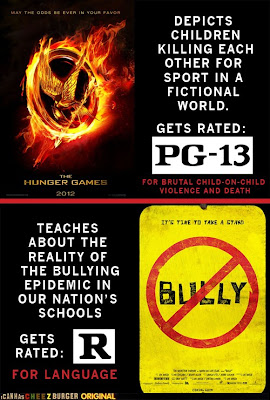 It never made any sense. A movie where children kill each other gets a PG-13 rating, a documentary about children getting bullied gets rated R. So I'm glad to see that Bully has been reclassified.

I'm happy that kids are going to be able to see it, and that the new rating will make it easier for schools to use it as an educational tool. But I'm really hoping that more adults will see it as well.

Because they're the only ones who can change the situation, a lot of them are living in denial, so they need really need to see what happens when horror meets blindness

Too many older people think that bullying is just like it was when they were in school. When in fact it's much much worse. Our culture encourages aggression, from our hockey rinks to our Parliament. Kids are being desensitized to violence. The internet is a bully's happy hunting ground. There are more and more victims.

And they are younger and younger.

His son then tried to befriend the boys during another recess — “presumably to get them to stop” bullying him, Ratte says. Instead the trio gave him another beating.

“That really affected him.” the father says. “He barely ate for two days, would fall asleep (before six) each night. He was just so withdrawn, and, then, he finally told us.”

And what's most striking about Bully is how casual that violence is. The bullies in the film knew the cameras were there.

But that didn't stop them...

Will I see the movie? I honestly don't know. I'm really grateful somebody made a movie at last. But seeing anybody young or old bullied makes me really angry.

That's one of the reasons I hate the Harper Cons so much.

And I don't need to be educated about the problem, I've been blogging about it for years, in a wasteland of indifference.

But I do know this image haunts me:

Even though the three boys were not allowed out at recess this past week, all his son did the other day “was walk around by himself,” apparently too timid to go near anyone.

And I do know that anyone who thinks they can build a kinder, gentler, more peaceful world, without fighting bullying.

Is blind to the horror, and doomed to failure...
Posted by Simon at 2:23 AM

I don't know if I can watch the film either Simon, bullying enrages me like nothing else

Keep being you and have a great Easter weekend

Thanks for this. I look forward to seeing this for sure.

The MPAA can operate the ratings system to help the cartel, so that the movies it prefers (the ones by its major members) prosper, and the ones it doesn't prefer languish.

I know I will despise what I see. I saw a 10 year old F.N. boy, being beat, kicked and spit on, by 3 kids around 15 years old. I waded in, and put this poor kid behind me. I then let the bullies have it, both barrels. The little boy, had a bloody nose, a wrenched knee and his clothes were ripped.

His mom had sent him to the store, for eggs and milk. Needless to say, his money was stolen from him. I took him into the store, and bought his milk and eggs. I was afraid the bully's, may attack him again. I drove him home, his mother was terribly upset. She would not call the police saying, to do so, would further worsen attacks on her son. She seemed every bit as afraid of the police, as she was of the bully's. She said, her son wouldn't have a hope in hell. Seems the police favor the white kids. I offered to go with her to the police. She still refused.I remember how sad and angry I felt...a little boy wasn't safe anywhere he went.

hi Kev...I feel I should go and see the movie to show my support, but I fear I might ruin it for other people, when I started glowing in the dark. And Seb agrees because he doesn't want to fan me for hours, or be forced to haul out the fire extinguisher.;) But seriously I simply can't watch that kind of cruelty to people... or animals. Although I am hoping that a lot of people watch it, so they can be motivated to demand that politicians and school boards do more to fight it.
And you have a great Easter weekend too...

hi Way Way Up...my pleasure. I've been watching this story for days, I'm glad I was able to write about it after it got reclassified. And I'm hoping it can be used in schools to help fight the problem. In our modern society sometimes seeing it on a screen can motivate people more than the real thing...

hi anonymous...yes it was a crazy decision to give it an R-rating, just because somebody used the F-word six times while bullying another kid. The MPAA's priorities seem a little skewed. Parents of kids who want to see it should be warned that there are some swear words, but the MPAA should have considered the vitally important message of the film, and given way to the greater good...

P.S. I'm proud of the way Canadians have acted by giving it a PG rating. Isn't it nice to know that we can still get something right?

hi anonymous...good for you for stepping in and letting the bullies have it. But sadly this is only too common:

I drove him home, his mother was terribly upset. She would not call the police saying, to do so, would further worsen attacks on her son. She seemed every bit as afraid of the police, as she was of the bully's. She said, her son wouldn't have a hope in hell.

Thank you for sharing that story. It's still a terrible struggle, but slowly but surely we're winning...